28 Feb 2020 — The biggest cosmic explosion in recorded history was detected about 390 million light years from Earth and it made a dent in surrounding space that could fit 15 Milky Way galaxies inside. 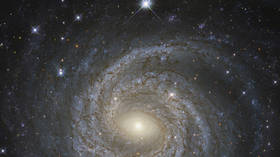 It is believed the eruption originated from a supermassive black hole in the Ophiuchus galaxy cluster. The explosion was compared to the Mount St. Helens eruption in 1980.

“A key difference is that you could fit 15 Milky Way galaxies in a row into the crater this eruption punched into the cluster’s hot gas,” said Simona Giacintucci of the Naval Research Laboratory in Washington DC, and lead author of the study.

Authors of the study believe an excess amount of gas being supplied to the black hole caused the eruption, which itself was possibly caused by a galaxy falling to the center of the cluster.

Back holes typically draw material toward them, but they also release material and energy when matter moving toward the black hole is redirected into jets or beams that make contact with surrounding material.

Hints of the explosion were first found in 2016 when scientists discovered an unusual curved edge in gathered images of the cluster. It was originally theorized that the curved edge was part of the wall of a cavity in the hot gas created by jets from the black hole. This theory was discarded and the new study from Giacintucci and her colleagues, with the help of new radio data, confirms that an explosion occurred there.

Massive radio waves bordering the previously observed curve are the “clincher” that tells the researchers the “eruption of unprecedented size” happened. The explosion is thought to have happened hundreds of thousands of years ago and it is five times bigger than the previous record holder for a cosmic eruption.

The study also reveals the explosion has concluded as the densest gases seen are located at a different position from the galaxy at the center of the cluster, depriving the black hole of further fuel for growth.

Data about the explosion was gathered through Chandra ESA’s XMM-Newton space observatory, as well as radio data from the Murchison Widefield Array (MWA) in Australia and the Giant Metrewave Radio Telescope (GMRT) in India.