By inuring the public to the harm of fraud and corruption, the president can convince his base of supporters that these are not serious crimes. 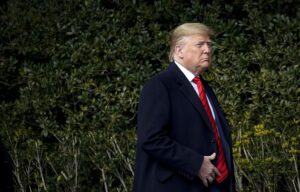 The list of 11 lucky Americans granted clemency read like a who’s who of the rich and the famous — former Illinois Gov. Rod Blagojevich, former San Francisco 49ers owner Eddie DeBartolo Jr., Wall Street financier Michael Milken and former New York City police Commissioner Bernard Kerik among them. Many of the offenders who received pardons or commutations of their sentences were convicted of crimes relating to fraud and corruption.

Many of the offenders who received pardons or commutations of their sentences were convicted of crimes relating to fraud and corruption.

The message Trump is sending seems loud and clear: Fraud and corruption are not serious crimes. And as such, these types of white-collar crimes can be ignored. As a former federal prosecutor, I could not disagree more. In fact, I believe fraud and corruption are among the most serious of crimes, because they are motivated by greed and erode our faith in government.

White-collar crimes are, by definition, usually committed by offenders in positions to succeed financially. They simply want more. Take Blagojevich, for example. Having ascended to governor, he controlled the levers of power in Illinois. Not satisfied with his existing authority, he sought to harness his power to extract even more power and money from others.

Among other things, Blagojevich tried to sell the Senate seat vacated when Barack Obama became president. When public officials abuse power in this way, it deprives the public of the honest services they deserve, damages trust in the government, deters people with integrity from seeking public office themselves and discourages honest business transactions with public officials. People become cynical and disengaged in democracy, which leaves governing to the autocrats. In this way, fraud and corruption have a corrosive effect on society.

No doubt, taking away someone’s liberty is a harsh penalty in a society that treasures freedom. For this reason, judges are required to fashion sentences that are sufficient but no greater than necessary. Among the reasons judges impose prison sentences are deterrence and respect for the rule of law. To induce people to comply with the law, they need to know that violations bring consequences.

Politicians and business executives behave in similar patterns. Most use their political and financial power in accordance with the law simply because it is the right thing to do. But we know that without a figurative police officer on the side of the road, some will abuse their power. Criminal punishment is necessary to deter this kind of conduct and promote respect for the rule of law.

But what if those deterrence measures are provided only sparingly? And what if the more well connected you were, the more likely you would be to get away with breaking the law? Suddenly, we have a very clear set of incentives to ignore the rule of law.

Predators of all types — from criminals who engage in fraud to those who commit sexual exploitation — often groom their victims for action they want to take in the future.

Predators of all types — from criminals who engage in fraud to those who commit sexual exploitation — often groom their victims for action they want to take in the future. They use an incremental approach to normalize inappropriate behavior. When the conduct advances only bit by bit, no individual step causes the victim to stop it. At some point, the transformation becomes complete, the behavior has lost its taboo, and the defendant can engage in once-unthinkable misconduct unchecked.

Trump may be using his pardon power in the same way. By inuring the public to the harm of fraud and corruption, the president can convince his base of supporters that these are not serious crimes. He has called the 14-year sentence for Blagojevich “ridiculous,” stating that his conviction is based on “a phone call where nothing happened.” Sound familiar?

Rod Blagojevich did not sell the Senate seat. He served 8 years in prison, with many remaining. He paid a big price. Another Comey and gang deal! Thank you to @LisaMarieBoothe who really “gets” what’s going on! @FoxNews

And yet, in that phone call, Blagojevich literally discussed selling Obama’s Senate seat. Blagojevich saw the appointment not as a duty of office but as a moneymaking opportunity. And contrary to Trump’s representation that Blagojevich’s conviction was based on a single phone call, he was convicted on 18 counts, including offenses based on his efforts to pressure a children’s hospital and developers of a racetrack to make campaign contributions. As the sentencing judge explained, “The harm is the erosion of public trust in government.”

The timing and the number of the pardons granted Tuesday suggest that something bigger than just these 11 defendants is afoot. Trump’s longtime adviser Roger Stone was sentenced to 3 years, 4 months in federal prison. A few hours later, Trump tweeted that Stone has “a very good chance of exoneration.” It certainly seems like Trump is laying the groundwork to pardon Stone, as well.

Clearly, Trump is using pardons to undermine public faith in the government and the criminal justice system. If, at some point, he does decide to pardon Stone and other allies, such as former campaign chairman Paul Manafort or former national security adviser Michael Flynn, the outrage will have been defused. Trump hopes that the reaction will be a collective shrug. And then what once-unthinkable behavior comes next? Does his conduct leave us with one system of justice for billionaires, family members and allies and another for the rest of us who are not so well connected?

Trump’s pardons are just one more act in a pattern of outrageous conduct that should set off alarm bells on a regular basis. He is counting on the public to stop listening.

Barbara McQuade, an NBC News and MSNBC legal analyst, is a professor at the University of Michigan Law School and a former U.S. attorney for the Eastern District of Michigan.