An Antidote to Helplessness and Disorientation: The Great Humanistic Philosopher and Psychologist Erich Fromm on Our Human Fragility as the Key to Our Survival and Our Sanity 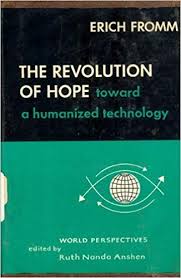 “Only through full awareness of the danger to life can this potential be mobilized for action capable of bringing about drastic changes in our way of organizing society.”

To be human is to be a miracle of evolution conscious of its own miraculousness — a consciousness beautiful and bittersweet, for we have paid for it with a parallel awareness not only of our fundamental improbability but of our staggering fragility, of how physiologically precarious our survival is and how psychologically vulnerable our sanity. To make that awareness bearable, we have evolved a singular faculty that might just be the crowning miracle of our consciousness: hope.

Hope — and the wise, effective action that can spring from it — is the counterweight to the heavy sense of our own fragility. It is a continual negotiation between optimism and despair, a continual negation of cynicism and naïveté. We hope precisely because we are aware that terrible outcomes are always possible and often probable, but that the choices we make can impact the outcomes.

How to harness that uniquely human paradox in living more empowered lives in even the most vulnerable-making circumstances is what the great humanistic philosopher and psychologist Erich Fromm (March 23, 1900–March 18, 1980) explores in the 1968 gem The Revolution of Hope: Toward a Humanized Technology (public library), written in an era when both hope and fear were at a global high, by a German Jew who had narrowly escaped a dismal fate by taking refuge first in Switzerland and then in America when the Nazis seized power.

In a sentiment he would later develop in contemplating the superior alternative to the parallel lazinesses of optimism and pessimism, Fromm writes:

Hope is a decisive element in any attempt to bring about social change in the direction of greater aliveness, awareness, and reason. But the nature of hope is often misunderstood and confused with attitudes that have nothing to do with hope and in fact are the very opposite.

Half a century before the physicist Brian Greene made his poetic case for our sense of mortality as the wellspring of meaning in our ephemeral lives, Fromm argues that our capacity for hope — which has furnished the greatest achievements of our species — is rooted in our vulnerable self-consciousness. Writing well before Ursula K. Le Guin’s brilliant unsexing of the universal pronoun, Fromm (and all of his contemporaries and predecessors, male and female, trapped in the linguistic convention of their time) may be forgiven for using man as shorthand for the generalized human being:

Man, lacking the instinctual equipment of the animal, is not as well equipped for flight or for attack as animals are. He does not “know” infallibly, as the salmon knows where to return to the river in order to spawn its young and as many birds know where to go south in the winter and where to return in the summer. His decisions are not made for him by instinct. He has to make them. He is faced with alternatives and there is a risk of failure in every decision he makes. The price that man pays for consciousness is insecurity. He can stand his insecurity by being aware and accepting the human condition, and by the hope that he will not fail even though he has no guarantee for success. He has no certainty; the only certain prediction he can make is: “I shall die.”

What makes us human is not the fact of that elemental vulnerability, which we share with all other living creatures, but the awareness of that fact — the way existential uncertainty worms the consciousness capable of grasping it. But in that singular fragility lies, also, our singular resilience as thinking, feeling animals capable of foresight and of intelligent, sensitive decision-making along the vectors of that foresight.

Man is born as a freak of nature, being within nature and yet transcending it. He has to find principles of action and decision making which replace the principles of instinct. He has to have a frame of orientation that permits him to organize a consistent picture of the world as a condition for consistent actions. He has to fight not only against the dangers of dying, starving, and being hurt, but also against another danger that is specifically human: that of becoming insane. In other words, he has to protect himself not only against the danger of losing his life but also against the danger of losing his mind. The human being, born under the conditions described here, would indeed go mad if he did not find a frame of reference which permitted him to feel at home in the world in some form and to escape the experience of utter helplessness, disorientation, and uprootedness. There are many ways in which man can find a solution to the task of staying alive and of remaining sane. Some are better than others and some are worse. By “better” is meant a way conducive to greater strength, clarity, joy, independence; and by “worse” the very opposite. But more important than finding the better solution is finding some solution that is viable.

As we navigate our own uncertain times together, may a thousand flowers of sanity bloom, each valid so long as it is viable in buoying the human spirit it animates. And may we remember the myriad terrors and uncertainties preceding our own, which have served as unexpected awakenings from some of our most perilous civilizational slumbers. Fromm — who devoted his life to illuminating the inner landscape of the individual human being as the tectonic foundation of the political topography of the world — composed this book during the 1968 American Presidential election. He was aglow with hope that the unlikely ascent of an obscure, idealistic, poetically inclined Senator from Minnesota by the name of Eugene McCarthy (not to be confused with the infamous Joseph McCarthy, who stood for just about everything opposite) might steer the country toward precisely such pathways to “greater strength, clarity, joy, independence.”

McCarthy lost — to another Democratic candidate, who would in turn lose to none other than Nixon — and the country plummeted into more war, more extractionism, more reactionary nationalism and bigotry. But the very rise of that unlikely candidate contoured hopes undared before — hopes some of which have since become reality and others have clarified our most urgent work as a society and a species. Fromm writes:

A man who was hardly known before, one who is the opposite of the typical politician, averse to appealing on the basis of sentimentality or demagoguery, truly opposed to the Vietnam War, succeeded in winning the approval and even the most enthusiastic acclaim of a large segment of the population, reaching from the radical youth, hippies, intellectuals, to liberals of the upper middle classes. This was a crusade without precedent in America, and it was something short of a miracle that this professor-Senator, a devotee of poetry and philosophy, could become a serious contender for the Presidency. It proved that a large segment of the American population is ready and eager for Humanization… indicating that hope and the will for change are alive.

Having given reign to his own hope and will for change in this book “appealing to the love for life (biophilia) that still exists in many of us,” Fromm reflects on a universal motive force of resilience and change:

Only through full awareness of the danger to life can this potential be mobilized for action capable of bringing about drastic changes in our way of organizing society… One cannot think in terms of percentages or probabilities as long as there is a real possibility — even a slight one — that life will prevail.

Complement The Revolution of Hope — an indispensable treasure rediscovered half a century after its publication and republished in 2010 by the American Mental Health Foundation — with Fromm on spontaneity, the art of living, the art of loving, the art of listening, and why self-love is the key to a sane society, then revisit philosopher Martha Nussbaum on how to live with our human fragility and Rebecca Solnit on the real meaning of hope in difficult times.