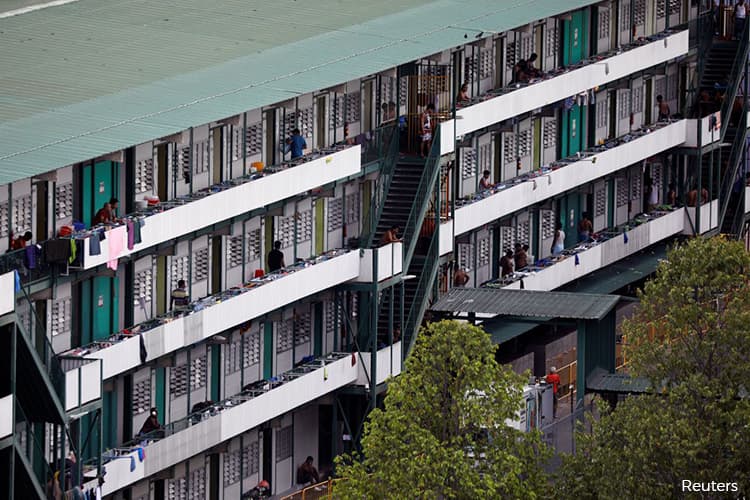 COVID-19: 96% of new cases in Singapore from dorm clusters. The Edge Markets

23 Apr 2020 –Singapore was widely praised as one of the countries that reacted quickly and effectively to contain the COVID-19 pandemic. It managed to keep daily cases below 50 for two months following its first case on January 23. But subsequent spikes – though still low compared to global levels – show how long and bumpy the road to recovery from coronavirus will be.

Singapore was well positioned to deal with coronavirus. The small island state was hit by the SARS pandemic in 2002-03 and then swine flu in 2009. The result was that government agencies had a strong working relationship with scientists and public health experts. It beefed up its healthcare capacity and put plans in place for future outbreaks.

So its response to the COVID-19 pandemic was rapid. Singapore quickly imposed travel restrictions, screened arrivals, and implemented a test-trace-quarantine regime, with temperature checks in schools and workplaces. 40% of infections were detected through contact tracing while the individual was still asymptomatic – efficiency levels every country needs as they contemplate ending lockdown.

Social distancing measures were progressively introduced, allowing businesses and people to plan for restrictions. Contrast this with the big-bang approach in India, where lockdown was introduced with four hours’ notice, and the dizzyingly contradictory messages prior to lockdown being introduced in the US and UK.

Singapore is known for its effective, technocratic, non-corrupt government, which adopts a long-term perspective to policy. In terms of economics, Singapore runs budget surpluses during good times. This gives it sufficient fiscal space to cope with the massive ongoing economic upheaval. The current stimulus plan exceeds S$50 billion (15% of GDP), drawing on national reserves for the first time since the global financial crisis of 2008-09.

This has enabled it to fund testing, treatment and help for those in quarantine. To prevent companies from laying off staff, which will make recovery more difficult, it is paying a portion of employee wages.

A marathon, not a sprint

After nearly two months of keeping cases down to a manageable number, Singapore introduced a lockdown on April 7, with schools and most workplaces shuttered to slow the spread of coronavirus.

Two shocks led to the lockdown. As countries rapidly started closing borders, Singaporeans and permanent residents returned home, inadvertently carrying the virus – especially from the US and UK, two countries that were very slow in their responses.

Next, an even greater proliferation in the last two weeks came came from the dormitories where migrant workers live in tightly packed quarters. Cases in these dorms continue to rise even as the government does extensive testing, introduces quarantine procedures, and builds new accommodation for the virus-free and beds for the infected. As of April 22, 8,094 out of the total of 10,141 cases were dormitory residents, with a single dormitory accounting for 22% of all cases in the country.

Many countries are seeing a flattening of cases and deaths after two to three weeks of lockdown. People are cautiously optimistic that the pandemic is being beaten and that life, markets, everything will revert to normal. But this may only be a semblance of normality and Singapore provides a cautionary tale.

Like the 1918 flu, we can expect waves of infection and cycles of confinement and deconfinement. What is critical is that restrictions are lifted cautiously when economies are reopened, with political leaders setting expectations that lockdowns may be reintroduced. Meanwhile, we need a warlike effort to build healthcare, and especially testing capacity.

Perils and promise of globalisation

If we want to return to a world of movement across borders, it will require all countries to control the pandemic. This is unlikely due to the vast differences in healthcare capacity and institutional capability around the world.

To minimise the risk of secondary waves of infection, borders must be opened sequentially and to countries where we can be fairly confident that the spread has been successfully contained. This, in turn, implies that a quick return to the previous world of globalised travel is a distant prospect.

Instead, we may see a split world with travel only among a subset of countries that have sufficient healthcare capacity and can effectively carry out test-trace-quarantine procedures. These are likely to be advanced economies and countries with competent leaders and good institutions. Countries where the infection rages will be shunned. Global cooperation, of which we see few signs today, is the only route back to the globalised world.

Singapore is a rich country. But to keep the country gleaming and working, an army of workers from poor Asian countries carry out essential repair, construction and domestic work. Many of these workers live in crowded dormitories and cramped quarters, sharing rooms and bathrooms. The government monitored their salaries to ensure they were paid on time, but struggled to contain the spread of the virus. The high-density living meant that they were always at risk of becoming virus hotspots.

Now think of slums in developing countries where density is even higher, sanitation poorer, and overall healthcare capacity sparse. These countries will struggle to arrest the spread of COVID-19. For many people, from the urban slums in Manila and Mumbai to favelas in Rio de Janeiro, social distancing is an unattainable privilege. Is herd immunity the only option for such places? How will the socioeconomic structure of these countries survive if the poor die in vast numbers, while the rich soldier on lamenting the lack of preferred food stocks?

The poor in many of these countries, who usually provide the workforce and services to keep cities running, have temporarily migrated back to rural areas. When countries reopen – and potentially close again – reverse migration will be needed. Will economic incentives be sufficient to compel economic migrants to continually undertake these moves or do policymakers have to worry about flattening migration curves as well? Many gig workers, in the meantime, are allowing the rest of us to shelter in place, while running the risk of infection. How long can this last?

Unlike the Black Death, which reduced inequality and triggered a significant increase in real wages in Europe, the current epidemic is revealing the contours of inequality, across countries and within countries.

Singapore on April 21 extended its lockdown for a month. Many of the choices that it continues to make will provide a window into the future for the rest of the world. While Singapore can lead by example, its future is inextricably linked to outcomes in the wider world, over which it exercises scant control.