Meet the US Veterans Returning to Make Amends in Vietnam

Forty-five years after the fall of Saigon, U.S. veterans are returning to Vietnam to find peace — and to atone for the damage they left behind. 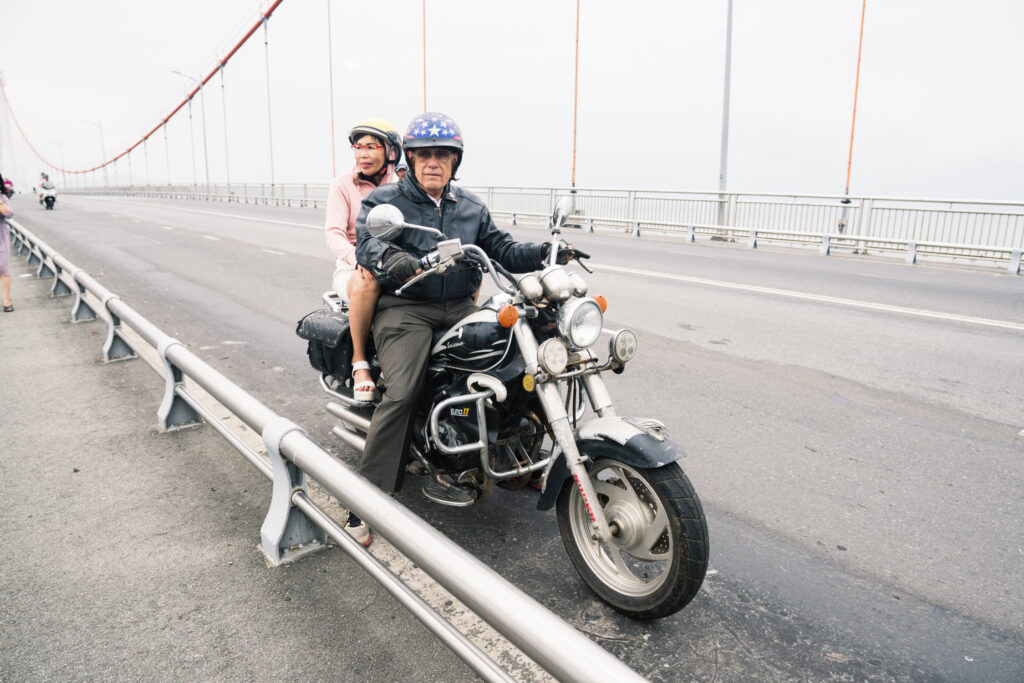 30 Apr 2020 – Many American veterans remember the first moment they stepped foot on the shores of Vietnam in vivid detail. But for David Clark, who arrived in 1968 as a 19-year-old combat engineer, the memory is much hazier. Mostly, he remembers the overwhelming heat — and how badly he wanted to make it out of the mountainous landscape alive.

“I kept thinking there’s been thousands of guys who did this before me, and they got to go home,” Clark said. “That’s all I wanted to do. I just wanted to go home.”

Nearly 50 years later, “home” means Vietnam — a country that Clark, now 70, believes is “the most beautiful, peaceful place in the world.”

Since 2010, Clark has lived in Da Nang, a coastal city only a few miles away from the Marble Mountains, an ancient Buddhist sanctuary. His home is not far from where he was once stationed in the Marine Corps. At that time, leaving his camp without a weapon was considered a court-martial offense. “Back then, I did not hesitate to put that M-16 in front of any man, woman or child’s face,” Clark said. “I wanted them to fear me — because I felt if they feared me, my chances of going home were a lot better.”

Despite the violence carried out by American troops during the war, Clark’s presence in Da Nang has been met with nothing but warmth from the local community. “When the Vietnamese people find out that you are an American veteran, they treat you like a comrade-in-arms,” Clark said. “Because they know that you were here in the same bucket of shit that they were in. It’s a very humbling feeling.”

April 30 is the 45th anniversary of the fall of Saigon, the North Vietnamese offensive that definitively ended the war on April 30, 1975. Since relations between the countries were normalized in the 1990s, thousands of former servicemen have journeyed to Vietnam. However, Clark is a member of a small community of veterans who have established permanent residence there. Many of them come seeking inner peace after years of battling PTSD, addiction and grief — and often, they find healing by immersing themselves in reconciliation efforts and working to alleviate the consequences of war.

A few years after moving back to Vietnam, Clark met his wife, a Vietnamese woman named Ushi, who runs a restaurant often frequented by American vets. Through her, Clark was introduced to Veterans for Peace, an organization that seeks to expose the true costs of militarism while advocating for a culture of peacemaking. For Clark, this means raising money for young victims of Agent Orange and supporting efforts to remove the unexploded bombs that remain beneath the soil decades later.

Unraveling the lies of war

The U.S. veteran most widely known by the Vietnamese community is Chuck Searcy, a lanky, soft-spoken Southerner who served in Vietnam in 1965. Like Clark, he is a member of Veterans for Peace who now lives in Vietnam. I interviewed him on the top floor of a hotel in Hanoi, the city he has called home for the past 25 years.

During the war, Searcy served as a military analyst in Saigon. His position required him to learn about Vietnamese culture and the nation’s centuries-long resistance against foreign occupation by imperial and colonial forces. The more he read, the more he questioned what he was being asked to tell the American people. Often, when his unit’s reports would go up the chain of command, they came back with revisions. “What we were writing was not the same as what they were saying in Washington,” Searcy said. “And so our reports would come back with a clear message: ‘Get it right.’”

After only a few months, most of the men in his unit had turned against the war. “We began to realize that what we were doing made no sense,” Searcy said. “We had been lied to, and we were also part of the lie. We were part of the institutional machinery that was creating those fabrications.”

Searcy returned home shortly after the Tet Offensive of 1968, a series of North Vietnamese attacks aimed at encouraging the United States to scale back its involvement in the war. The attacks left hundreds of civilian bodies lining the streets — and by the time Searcy returned home, he was bitter and confused, with more questions than answers.

“I had just witnessed so much destruction, and so much of it had been caused by us,” Searcy said. “I didn’t know who I was as an American. Everything that I’d been taught growing up about the values of America, and that our government could do no wrong — all of that had just been cut out from under me.”

A few months after his homecoming, Searcy was asked to speak at an anti-war rally at the University of Georgia, where he voiced his dissent in front of thousands. His views on the war alienated his conservative military family, who feared their son had come back from Vietnam a communist. It would be two years before he spoke to his family again.

Despite their opposition, Searcy was determined to bring an end to the bloodshed any way he could. Soon after the rally, Searcy became active in the resistance group Vietnam Veterans Against the War — thus beginning his lifelong journey as an activist.

What Americans left behind

In 1995, Searcy returned to Vietnam to take part in reconciliation efforts. He has been living in Vietnam — and working to reverse the painful aftermath of the war — ever since. In 2001, he helped launch an initiative called Project RENEW, which stands for Restoring the Environment and Neutralizing the Effects of War. The project aims to unearth the unexploded bombs that remain in the land, especially in the Quang Tri Province. In addition to locating and cleaning up munitions, they offer aid to families with members who have survived explosions.

Between 1957 and 1975, the United States dropped more than seven million tons of bombs on Vietnam, Laos and Cambodia — more than twice what the U.S dropped on Europe and Asia during World War II. For many in Vietnam, the war may have ended, but the bombing has never truly stopped. Ten percent of the ordnance dropped by the United States never detonated when deployed, meaning that many of these bombs, also known as UXOs, remain buried beneath the ground to this day.

Elementary school children in Vietnam are as accustomed to identifying grenades as American children are to fire drills.

It’s impossible to tell how many people have been injured or killed by UXOs in Vietnam since the war ended, but some estimate that there have been more than 40,000 deaths. Those who encounter the bombs but survive often lose limbs or are blinded, a particularly devastating occurrence for those living in poverty in areas with few options for income. According to Clark, many of these victims are rural farmers working in rice paddies or collecting scrap metal to sell for survival. It’s also not uncommon for children to stumble upon the bombs while playing outside — which is why much of Project RENEW’s work is done in a classroom setting.

Because of Project RENEW, children in the Quang Tri Province learn about UXOs in elementary school — and they are as accustomed to identifying grenades as American children are to fire drills. When they encounter UXOs, they are instructed to stay away from them and notify a team of first responders, who will arrive with an ambulance and evacuate the neighborhood within the hour. Upon assessing the land, the team will often find three or four more bombs in the area — and after the roads are blocked, the bombs will be strategically detonated.

According to Searcy, safe, controlled explosions done by first responders happen in the province four or five times every day. “There’s no such thing as stepping back and saying, ‘okay, we did it. It’s finished. Vietnam is safe,’” Searcy explained. “Vietnam will never be safe. This will go on for centuries — but people can be safe. They now live with the confidence that they know what to do, and how to control the situation.”

Despite their surprise at where life has taken them, both Clark and Searcy believe they are where they are supposed to be. “When I’m in the United States, the Vietnam War haunts me every day and every night,” Clark said. “When I’m in Vietnam, the American War has been over for 45 years.”

When Searcy first moved to Vietnam almost 30 years ago, he wasn’t sure how long he would stay — but his role as a bridge between Americans and the Vietnamese people has kept him there. “Every year since I’ve moved here I’ve thought, ‘This might be the year. I’ll probably go back to Georgia and sit on my front porch,’” Searcy said. “But each year, there’s a tangible step towards the goals that we’ve all been seeking.”

“One of the greatest things that’s happened to me is that, after all these years, I am going to die in Vietnam — but I get to die here of my own choosing.”

Because of Project RENEW’s efforts, casualties from unexploded ordnance in the Quang Tri Province have declined drastically. In 2001, when the project began, 89 people in the area were killed or injured by UXOs. By 2017, that number had dwindled down to two — and for the past two years, the area has seen zero accidents.

In addition to their work with Project RENEW and Veterans for Peace, Clark and Searcy spend their days visiting the Vietnam Association for Victims of Agent Orange, or VAVA. In Da Nang alone, there are 1,000 children living with serious medical conditions caused by toxins sprayed by the U.S. military. The VAVA center provides these children with rehabilitation, schooling and vocational training, as well as plenty of dance parties to keep their spirits up. The children are always excited to get visitors — when Clark and his wife Ushi walk into the center, they are often bombarded by hugs.

After a lifetime of addiction, nightmares and PTSD, Clark has found peace in the last place he ever expected. “When I first went to Vietnam, I was ready to die for my country,” Clark said. “And I’m grateful that I didn’t. But one of the greatest things that’s happened to me is that, after all these years, I am going to die in Vietnam — but I get to die here of my own choosing.”