America Is Fracturing—and So Is ‘The New York Times’

In the current crisis, the stakes are too high to chase clickbait. 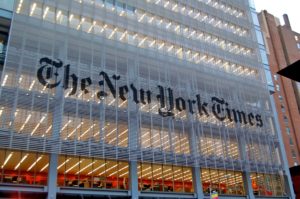 8 Jun 2020 – The global uprising against racist policing is unsettling many institutions, perhaps most surprisingly The New York Times. On Sunday [7 Jun], James Bennet, editor of the opinion section, resigned his post. His departure was a messy one. Since Wednesday, the newspaper had been rocked by an internal staff revolt against a controversial op-ed by Arkansas Senator Tom Cotton arguing for the use of military troops to quell the uprising, which the lawmaker portrayed as legitimate protests hijacked by nihilistic, violent rioters. The op-ed was inflammatory, demagogic, and contained major factual errors.

More than 1,000 Times employees signed a letter complaining that Cotton’s “message undermines the work we do, in the newsroom and in opinion, and is an affront to our standards for ethical and accurate reporting for the public’s interest.” The push against the op-ed was spearheaded by African American journalists, who had justifiable grounds for arguing that the article “puts Black @nytimes staff in danger” in any escalation of conflict between the government and the protesters.

The intense reaction to the op-ed was, first and foremost, a reflection of the very real threat to American democracy. The idea of using troops was no mere theoretical suggestion. On Monday, Trump met with Secretary of Defense Mark Esper and Chairman of the Joint of Chiefs of Staff General Mark Milley and requested that 10,000 active-duty troops be deployed inside America. Esper and Milley resisted the request, but did join Trump in a photo op at St. John’s Church that took place after protesters had been dispersed by federal law enforcement officers.

Milley appeared in uniform in the photo op, thus seemingly giving military sanction to the treatment of protesters. His actions appear to have sent shock waves through the Pentagon, causing an intense pushback in the form of retired military officers, notably former secretary of defense James Mattis, condemning Trump’s handling of the protests. Active-duty military personnel are prevented by custom and regulation from commenting on partisan matters. But it’s reasonable to infer that the Pentagon was using Mattis and other retired soldiers to make its displeasure felt.

The staffers at the Times who organized against the op-ed were motivated by the same fears that seem to have animated the Pentagon: the worry that the military might be drawn into a domestic political conflict.

But beyond the panic at Trump’s threat to democracy, the actions of the staff of the Times were also a reflection of a changing approach to journalism in the face of a breakdown in the political consensus. This change has been felt in both the newsroom and the opinion section—but in very different ways. The divergent approach to what James Bennet has called “the crackup of ideologies” is the true source of the conflict between the newsroom and the opinion section.

For most of its history, The New York Times has been not a paper of the left or of the right but rather of the establishment. It might have leaned in recent decades toward the Democratic Party, but its preeminent goal has been to win the trust of well-to-do readers of both the center left and the center right. It achieved this goal through style as much as substance: Unlike tabloids with screaming headlines about murder and corruption, the Times has presented the news in a tactful, restrained, and cool fashion. This has led to a preference for neutral, colorless, depersonalized prose that conveys a feeling of objectivity: a view from nowhere.

The polarization of America since the end of the Cold War has made this faux-objectivity increasingly obsolete. A shared consensus that all elite readers can be assumed to agree with no longer exists.

In an important essay on Sunday, Times reporter Ben Smith argued that the Ferguson uprising of 2014 was pivotal in undermining the older consensus journalism. A cohort of young African American journalists covering Ferguson came to realize that the rules of faux-objectivity prevented them from accurately describing the police violence they witnessed.

According to Smith, “Seeing the brutality of a white power structure toward its poor black citizens up close, and at its rawest, helped shape the way a generation of reporters, most of them black, looked at their jobs when they returned to their newsrooms.” The experience of covering Ferguson, Smith notes, “carried over into the next challenging era: the arrival of Mr. Trump, whose bigoted language and tactics shattered norms. Black reporters were joined by other journalists in pushing, inside newsrooms and on Twitter, for more direct language—and less deference—in covering the president.”

If the breakdown of consensus journalism has led newsrooms, and particularly African American reporters, to be more blunt, it has also led opinion pages to expand the spectrum of opinion.

When James Bennet was hired by the Times in 2016, he seemed to be well situated to oversee an opinion section confronting a fracturing political spectrum. He had previously edited The Atlantic, where he had a reputation for cultivating a diversity of viewpoints ranging from the radical Ta-Nehisi Coates to the conservative David Frum.

In a memo he sent to Times staff on February 15, 2017, Bennet eloquently argued that diversity of viewpoint in the op-ed page was essential for bringing together a divided America:

It’s a commonplace borne out by social science that Americans are sorting themselves by party or convictions and losing the ability to engage respectfully—even if only to disagree—across those tribal lines. Most people seem to think this is a bad thing, but very few institutions are trying seriously to do anything about it. We are trying. It’s what The Times is supposed to do, and it’s what democracy needs.

He added, “We’re taking some chances, recruiting voices that are new to The Times and publishing pieces that press against our traditional boundaries.”

In some ways, Bennet’s opinion section lived up to these ideals. Prior to his arrival, it’s fair to say that the political spectrum at the Times ran from Clintonian liberalism on the left (embodied by Paul Krugman) to moderate neoconservatism on the right (voiced by David Brooks). This hardly exhausted the political spectrum in the age of Donald Trump and Bernie Sanders. To his credit, Bennet brought to the Times voices much further to the left, notably Jamelle Bouie. Recently, the paper ran an excerpt of Vincent Bevins’s new book on the 1965 anti-communist massacre in Indonesia. Bevins argued, “We need to understand that the United States is not, in fact, beloved as a beacon of freedom, democracy and human rights. From Argentina to the Democratic Republic of Congo, East Timor to Iran, millions of people are skeptical of Washington’s intentions.” This was far more radical fare than the Times menu usually provides.

Bringing in voices on the right has proved more difficult for Bennet. Trumpism may be the order of the day in Washington, but literate and plausible Trumpists who can write convincing op-eds are rare (although Bennet did manage to find one in Daniel McCarthy). So instead of Trumpists, Bennet had to settle for a stable of three Never Trump conservatives, two inherited (David Brooks, Ross Douthat) and one brought on board (Bret Stephens).

But Stephens himself has proven a problem with his penchant for glib contrarianism on climate change, Woody Allen, and other issues. Stephens’s column is symptomatic of a larger problem with Bennet’s opinion section. In his search for diversity, Bennet too often settles for hot takes and clickbait. As one Times staffer complained to Vox, “Does op-ed care at all about how its actions affect the newsroom whose legitimacy and sweat it trades on in order to sling hot takes? It’s not clear that they do.” Bennet’s propensity toward trolling, which was noticed during his tenure at The Atlantic, seemed to be based on the following premise: We are too divided to convince each other of the truth, so all we can do is entertain each other with outrageous opinions.

In the light of the current crisis, soliciting a column from Tom Cotton asking for Trump to send in the troops is irresponsible trolling. The idea is actually being taken seriously in Washington, so it deserves to be investigated as a news story. But to bring it up in the op-ed section is to treat a dangerous gesture by a besieged administration as if it were merely an intellectual exercise, a novel idea worth debating. It’s the equivalent of running op-eds during Watergate asking if Nixon should in fact firebomb the Brookings Institution or assassinate whistle-blowers.

America is fracturing—and so is The New York Times. The newsroom has adjusted to the crisis by allowing journalists to write more forthrightly and honestly about politics. The opinion page has taken a different tack by elevating extreme voices. It’s hardly surprising that these two approaches collided.