Coronavirus: How Brazil Became the Second Worst Affected Country in the World 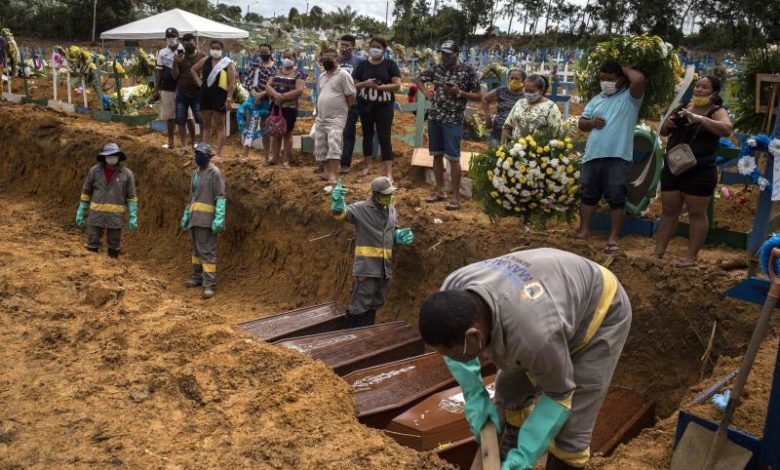 29 Jun 2020 –The COVID-19 pandemic has stress-tested countries, economies and political systems like never before. Nowhere has the outcome been more devastating than in Brazil, arguably the country with the worst pandemic response in the world.

Brazil’s vulnerabilities are visible in the mass graves in São Paulo and Manaus. The country is competing with the USA for the largest number of diagnosed COVID-19 cases (more than one million) and the highest number of fatalities (above 50,000 – but likely to be a vast undercount). Disturbingly, there’s no sign that Brazil’s cases or deaths have peaked yet.

There is abundant evidence from other countries that inequality leads to worse outcomes and that strong leadership implementing clear policies works best. Brazil has failed on both counts. The coronavirus has taken advantage of Brazil’s preexisting fractures and inequalities, corroding an already afflicted society. Here, I take a look at how we’ve reached this point.

Inequality is a killer

With the ninth largest GDP in the world and yet one-quarter of its population living in poverty, Latin America’s largest nation is one of the most unequal countries on Earth. This is especially true when it comes to health: compared to wealthier citizens, poorer Brazilians are less likely to have health insurance and are less likely to use health services, despite needing them more.

In the past two decades, Brazil has suffered repeatedly from dengue, chikungunya, Zika, H1N1 and other intractable plagues that invariably afflict the poor disproportionately. It is little surprise to see coronavirus doing the same.

The illness reached the country through rich tourists returning from Italian holidays but, significantly, the first person to die was one of their domestic workers. COVID-19 has spread from the rich downwards, within households and across them, starting in São Paulo and Rio de Janeiro and eventually reaching the poor in the north and north-eastern regions – where its impact has, unsurprisingly, been devastating, given the precarious housing, health, nutrition and other circumstances of the poor.

It did not have to be this way. Brazil’s 1988 constitution designed a Scandinavian-style welfare state in the tropics, including a universal health system (SUS) free at the point of use. Nevertheless, the SUS remains incomplete and, during the pandemic, there have been insufficient resources in the public health sector, from actual hospitals to staff, ventilators and other equipment.

This is despite Brazil’s large and diversified manufacturing base and impressive GDP. Arguably it had the resources to address the pandemic effectively, but the political will was lacking. For example, Vietnam’s GDP per capita is less than one-third of Brazil’s, yet it has managed to avoid any COVID-19 deaths by acting decisively to combat the virus.

Brazil’s response to COVID-19 has been limited by institutional paralysis driven by its president, Jair Bolsonaro. It would be easy to imagine a smart and ambitious politician demonstrating empathy with the people, blessing deprived communities with love and resources, commanding the government to do more and reporting progress to the nation daily. Since every pandemic wave must pass, this would be a one-way ticket to glory.

Bolsonaro did the opposite. Variously he has referred to the disease as “just a little flu”, “hysteria” and something that Brazilians won’t catch.

In the absence of a coronavirus vaccine, experience shows that the public health response must include a lockdown – and, seemingly, the earlier it is imposed, the lower the death toll. Bolsonaro refused to impose one, and abandoned the matter to governors and mayors. This inevitably created a patchwork of incoherent rules: shopping centres closed in some cities but open in neighbouring others, only some municipalities requiring masks on public transport, and rule changes according to local pressures instead of medical evidence.

Rules ended up making little sense even in the same city – for example, in São Paulo, shopping centres are currently open but parks are closed.

As other countries enforced social distancing, Bolsonaro never stopped meeting his supporters while, at the same time, plotting against his own health minister after disagreeing over the pandemic response. He promoted using hydroxychloroquine to fight the pandemic regardless of technical advice (studies have since found it doesn’t protect against or treat COVID-19).

Bolsonaro also picked daily fights with the media. As his popularity tumbled, he escalated his attacks against Congress and the Supreme Court, and has increasingly relied on authoritarianism to galvanise support.

Since the pandemic began, one minister of health has been sacked and a second has resigned. Brazil’s response to the pandemic is being led by a non-specialist general who is unaware that the country is the southern hemisphere and cannot name the small states in the federation. Amid this chaos, mass testing never took off. Contact tracing never even started.

Things set to get worse

As disastrous as Brazil’s numbers are, the health crisis has been accompanied by a significant undercounting of victims, suggesting the reality is much worse. For every ten deaths due to COVID-19, another eight have been attributed to acute respiratory distress syndrome (ARDS). This condition took off in March, and has been identified as a complication of COVID-19. ARDS has been recorded as the cause of 23,400 deaths in Brazil in the first six months of 2020 (in contrast with an average of 1,800 during the same period in the previous five years).

Severe delays to testing have also meant that thousands of deaths due to COVID-19 were not recorded as such. In addition, family members have been rumoured to object to the word “coronavirus” on death certificates, and there are reports of pressures on local administrators to minimise numbers.

In early June, Bolsonaro’s government also stopped publishing its daily totals of cases and deaths, arguing that the figures it had been releasing were inaccurate because they were too high. The worldwide reaction was vociferous, and before the government had the chance to revise any of its previously released data, Brazil’s Supreme Court ordered the Ministry to Health to resume publishing. The president duly backtracked.

A second concern is Brazil’s insufficient economic policy response, which has worsened the impact of the pandemic by leaving millions with zero income and firms with zero sales or credit. This has pushed the poor to stay inside crowded homes lacking water, sewerage and – with rising unemployment – also food.

Even though Congress passed an emergency budget early on in the crisis, Bolsonaro’s proposed grant to the poor, unemployed, aged and starving was so low that parliament overruled him. More generous support has since been provided through lower interest rates, cheap loans and Central Bank support to financial institutions. Brazil has also done a currency swap with the USA, aiming to stabilise its currency.

Nevertheless, Brazil’s GDP is bound to contract heavily. Output declined by 15-20% in April alone, suggesting an unprecedented economic crisis yet to be felt in full.