The Racist Underpinnings of the American Way of War

The deadly interplay of racism, genocide, and denial at the heart of American white society has been reproduced in the country’s wars. 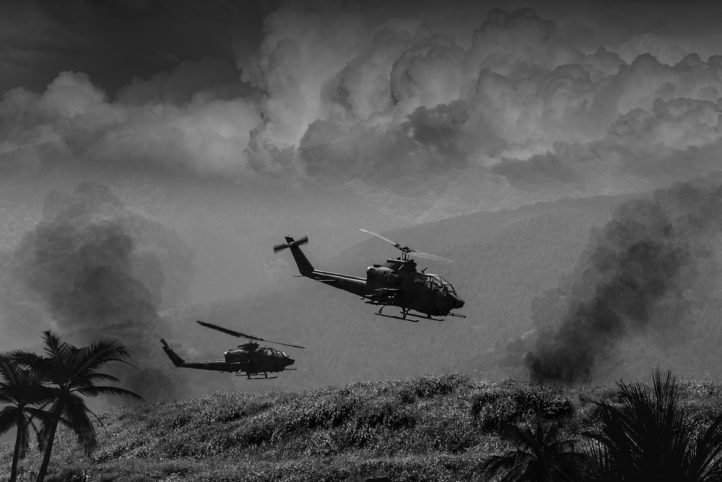 1 Jul 2020 – The U.S. military command’s pushback against President Donald Trump’s attempt to use the military against people demanding racial justice has received a lot of good press.

But let’s not overdo the praise. For most of their existence, the U.S. Armed Forces were racially segregated. It was only in the 1950s that the slow process of integration began, with racial discrimination still a major problem in the ranks today.

While race has been widely discussed with respect to the composition and organization of the military, much less attention has been paid to the way racism has been a central feature of how the United States has waged its wars.

The military is an institution of American society, and as such its origins and development have been centrally influenced by the political economy of U.S. capitalism.

The political economy of the U.S. is built on two “original sins.” One was the genocide of Native Americans, the main function of which was to clear the ground for the implantation and spread of capitalist relations of production. The second was the central role played by the slave labor of African Americans in the genesis and consolidation of U.S. capitalism.

These original sins have had such a foundational role that the reproduction and expansion of U.S. capitalism over time have consistently reproduced its racial structures.

So powerful were its racial impulses that providing the legitimacy necessary for capitalist democracy to function necessitated the radical ideological denial of its racial structures. This radical denial was first inscribed in the Declaration of Independence’s message of radical equality “among men” that was drafted by the slaveholder Thomas Jefferson. Later it appeared in the ideology that the mission of U.S. imperial expansion was to universalize that equality among the non-European, non-white societies.

Why do we focus on war-making? First, because war is an inevitable event in the political economy of capitalism. Second, because it has been said that the way a nation wages war reveals its soul, what it’s all about, or to use that much derided term, its “essence.”

The deadly interplay of racism, genocide, and radical denial at the heart of American white society has been reproduced in that society’s military, and it has been especially evident in America’s Asian wars.

War in the Philippines: A Genocidal Mentality

Racialized warfare was practiced in the Philippines, which was invaded and brutally colonized by the United States from 1899 to 1906.

In charge of the enterprise were so-called “Indian fighters” like Generals Arthur MacArthur and Henry Lawton, who fought against the Apache fighter Geronimo, who brought to the archipelago the genocidal mentality that accompanied their warfare against Native Americans in the American West.

Filipinos were branded “n—ers” by U.S. troops, though another racist epithet, “gugus,” was also widely used for them. When Filipinos resorted to guerrilla warfare, they were dehumanized as barbarians practicing uncivilized warfare in order to legitimize all sorts of atrocities against them. The war of subjugation was carried out without restraints, with General Jacob Smith famously ordering his troops to convert Samar into a “howling wilderness” by killing any male over 10 years old.

But at the same time that it was waging a barbaric war that took the lives of some 500,000 Filipinos, Washington was justifying its colonization of the archipelago as a mission to extend the benefits of democracy to them. Rudyard Kipling’s “Take Up the White Man’s Burden,” written in 1899 to glorify the American conquest of the archipelago, resonated throughout white America.

The war in Europe waged by the U.S. during the Second World War was promoted among the American public as a war to save democracy. This was not the case in the Pacific theater, where all the racist impulses of American society were explicitly harnessed to render the Japanese subhuman.

This racial side to the Pacific War gave it an intense exterminationist quality. To be sure, this was a face-off between two racist militaries. Both sides painted the other as barbarians and people of inferior culture, in order to license atrocities of all kinds. Violation of the rules of the Geneva Convention was the norm, with neither side preferring to take prisoners. When prisoners were taken, they were subjected to systematic brutality.

Even as the U.S. waged war against Japan, it waged a domestic war against Americans of Japanese descent, declaring them outside the pale of the Constitution and incarcerating the whole population, something that was unthinkable when it came to Americans of German or Italian descent, though Germany and Italy were also enemy states.

But perhaps the most radical expression of the racial exterminationist streak of the American war against Japan was the nuclear incineration of Nagasaki and Hiroshima in August 1945, an act that would never have been entertained when it came to fellows of the white race like the Germans.

War in Korea: “Everything Is Destroyed.”

The Korean War of 1950-1953 also saw the dialectic of racism, genocide, and denial come into play. The war was justified as one of saving Koreans from communism, but it came close to exterminating them.

General Douglas MacArthur, who was supreme commander, advocated the use of nuclear weapons. His plan was to use atomic bombs against the Chinese and North Koreans while retreating and then spreading a belt of radioactive cobalt across the Korean peninsula to deter them from crossing into South Korea. This was disapproved by Washington in favor of unlimited aerial bombing using both conventional blockbusters and the new terrifying napalm bombs.

The result was the same. The U.S. dropped more tons of bombs in Korea in 1950-1953 than in the Pacific during the whole of World War II. The result was described this way by U.S. General Emmett O’Donnell, head of the U.S. Air Force Bomber Command: “Everything is destroyed. There is nothing left standing worthy of the name.”

Before Congress, General MacArthur unwittingly admitted the exterminationist quality of the war he waged. “The war in Korea has almost destroyed that nation of 20 million people,” he said. “I have never seen such devastation.”

It was in Korea that the marriage of racism to advanced technology to produce the overwhelming devastation that is a central characteristic of the American Way of War was perfected. Precious white American lives had to be expended as little as possible, while taking as many cheap Asian lives as possible, through technology-intensive unlimited aerial warfare.

Vietnam: “Bomb Them Back to the Stone Age”

The streak of racial exterminationism emerged again during the Vietnam War.

Labeling the Vietnamese “gooks” — a term derived from the term for Filipinos, ”gugus,” in an earlier colonial war — dehumanized them and made all Vietnamese, combatant and non-combatant, fair game.

As in the Philippines at the turn of the century, Vietnamese guerrilla tactics frustrated the Americans — and the racist underpinnings of the American military mind allowed Washington to wage a war without restraint in a desperate effort to win it, one that ignored all the principles of the Geneva Convention. As in Korea, the U.S. waged in Vietnam a “limited war” in the sense of confining it geographically so that it would not escalate into global war, but it waged this limited war with unlimited means.

The racial dehumanization of the Vietnamese found its classic expression in the words of General Curtis LeMay, head of the Strategic Air Command, who said that America’s aim must be to “bomb the Vietnamese back to the stone age.” And Washington tried to do just that: From 1965 to 1969, the U.S. military dropped 70 tons of bombs for every square mile of North and South Vietnam — or 500 pounds for each man, woman, and child.

At the same time that they were killing them indiscriminately, Washington was insisting that its mission was to save the Vietnamese from communism and bring American-style democracy, just as it had brought it to the Philippines, Japan, and Korea, and that it would not take no for an answer.

Again, U.S. political and military strategy cannot be understood without reference to the subliminal racial assumptions that guided it. The costs exacted by a war marked by a racist and exterminationist streak were devastating: some 3.5 million Vietnamese killed in less than a decade.

The American Way of War

In sum, what we might call the “American Way of War” has emerged from a convoluted historical and ideological process.

This war-making cannot be divorced from the racism that is fundamentally inscribed in the capitalist political economy of the United States and is structurally reproduced in its growth and expansion.

This structural inscription stems from two original sins: the genocide of Native Americans to clear the social and natural path for the rise and consolidation of capitalism, and the slave labor of African Americans that played an essential role in laying the foundations for industrial capitalism.

Owing to the foundational role of genocide and racism, the ideological legitimation necessary to make the system function has involved a radical denial in the form of a declaration of equality “among men,” and the claim that the aim of U.S. imperial expansion is to extend this equality throughout the world.

Finally, the American Way of War is marked by the marriage of advanced technology and racism that is intended to limit the expenditure of lives on one’s side while inflicting massive devastation on the other side — under the guiding assumption that white lives are precious and colored lives are cheap.

This article was originally delivered as a lecture in the “Webinar Political Crisis in the United States and the Need for Internationalism,” sponsored by Global Justice Now UK! on 20 Jun 2020.

Walden Bello is the co-founder of and current senior analyst at the Bangkok-based Focus on the Global South, the International Adjunct Professor of Sociology at the State University of New York at Binghamton, and National Chairperson of Laban ng Masa, a progressive coalition of organizations and individuals in the Philippines. He received the Right Livelihood Award, also known as the Alternative Nobel Prize, in 2003, and was named Outstanding Public Scholar of the International Studies Association in 2008. Bello did his doctoral dissertation on the counterrevolution in Chile in 1970-73. He is currently senior research fellow at the Center for Southeast Asian Studies of Kyoto University.