This Is What Happens When the War on Terror Is Turned Inward, on the USA

Trump has realized that our vast post-9/11 security state can be used to police internal bogeymen like antifa. 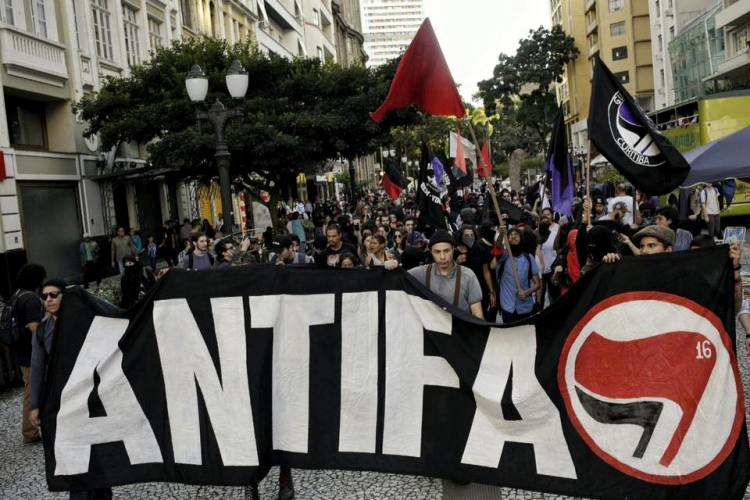 24 Jul 2020 – A strange and necessary ingredient of America’s descent towards fascism is that it will have little impact on the majority of people. As militarized federal agents are deployed into major cities to snatch protesters and charge them with harsh federal crimes for daring to deface the ruling party’s monuments, most Americans will continue living their normal lives with no discernible changes, at least for the time being. People wake up and eat breakfast and spend their days doing mundane tasks in fascist countries, too.

If there was ever a tipping point, we are past it. Trying to stare hard at the daily news to determine the exact point at which we slip into fascism is like staring at a baby to see when it turns into an adult. By the time you perceive it, it’s already happened. It is important to understand that the crackdown phase that we are now in – the unaccountable government forces, the riot police, the teargas, the targeted political prosecutions that will come next – are not something new, but something old. This isn’t about Donald Trump. This is about America, baby. This is what we do.

Trying to determine when we slip into fascism is like staring at a baby to see when it turns into an adult. Once you perceive it, it’s already happened.

Trump, a fool ruled by impulse rather than strategy, did not build the fearsome machine of government oppression that is now being aimed at his political opponents. This machine was systematically assembled and lovingly tended to by generations of presidents before him – Democratic, Republican, Whig. Trump is only broadening its aperture. All of these tools have been sharpened on the bones of Native Americans and Black people and immigrants and Muslims overseas. America has always needed someone to oppress. Mostly so that we could steal their stuff, but also so that the rest of us didn’t turn against one another. This country has managed to avoid a class war by giving poor white people an array of minorities to abuse, a trick that has benefited rich white people for centuries. We have used injustice not just as a way to get ahead, but as a release valve. Our leaders have long calculated that it is safer to subjugate and mistreat a minority of the population than to risk dissatisfaction in the majority. In doing so, the government has become very adept at creating enemies and wielding power against them in flagrant shows of force.

These are trivial observations, basic facts that will only be disputed by those who are destined to land on the side of fascism anyhow. The question is what they mean for our present moment, which is distinguished not by the existence of government oppression but by its direction. We are finding out what happens when the war on terror is turned inward on ourselves. In addition to the federal agents already in Portland, more are coming to Chicago, Albuquerque, and Kansas City; that may well be just the beginning of a national rollout. “Protecting federal property” and “maintaining law and order” are twin fig leaves wafting in a cloud of teargas. The Department of Homeland Security has effectively become a White House-controlled paramilitary and domestic surveillance service unaccountable to anyone except Trump and his loyalists. (If we’re being honest, this moment has been inevitable since DHS was panic-created in the days after the September 11 attacks. If there is any more fascist word than “homeland”, I haven’t heard it.)

The basic logic behind gun control is that if there are a bunch of guns lying around, sooner or later someone will get shot. The same holds true for the security state. If you build it, it will eventually come for you. Cloaked in the banality of federal bureaucracy, we have tolerated the creation of a terrifying set of powers that now rest in the small hands of a man who has been waiting his entire life to take revenge on each and every enemy who has slighted him. Barack Obama sat in the White House for eight years and did nothing to dismantle this bureaucracy of soldier-cops. He was too busy using it in foreign drone wars. It’s too seductive to have that power, when you are the one who controls it. Now a worse president has it, and it will be turned, at last, against a bigger chunk of us than ever before.

The trick now is convincing that tranquil majority that their interests are more aligned with the protesters than with the cops in fatigues.

Every new outrage is a test of what we will tolerate. If the government can roll out troops to a large swath of major cities and shoot the eyes out of protesters with rubber bullets all under the guise of stopping some kids from spray-painting some courthouse, it is a fairly good indicator that the spirit of the broader American public will not rouse itself to stand in the way of fascism’s tightening grip. In a nation this big, you can make 100 million people official Enemies of the State and still leave a comfortable majority blissfully unaffected. The trick now is convincing that tranquil, all-American majority that their interests are actually more aligned with the protesters wielding spray-paint outside the courthouse than with the militarized cops in fatigues.

That shouldn’t be an impossible task. When there is actual justice being done inside the courthouses, the protesters and the storm troopers will both disappear.

Hamilton Nolan is a labor reporter at In These Times.