10 Jul 2020 – As the Turkish President signed a decree today converting the ancient Hagia Sophia in Istanbul into a mosque, the UN cultural agency (UNESCO) said that it “deeply regrets the decision” made “without prior discussion”, having earlier in the day called on the State to abide by its “legal commitments and obligations” in accordance with it’s status as a museum, on the World Heritage List. 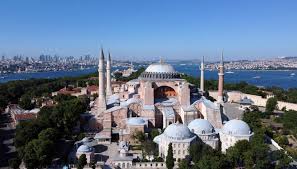 The majestic building was founded around 1,500 years ago as a cathedral and is widely regarded as the foremost example of Byzantine Christian architecture in the world. Following the rise of the Ottoman Empire, it became a mosque, but in 1934, was designated a secular museum, shared by Christians, Muslims and those of all faiths or none, alike.

Hagia Sophia: UNESCO deeply regrets the decision of the Turkish authorities, made without prior discussion, and calls for the universal value of #WorldHeritage to be preserved.

President Recep Tayyip Erdogan signed the decree following years of campaigning by a cultural association, and the decision earlier in the day by a Turkish court, handing control of the building over to the nation’s religious directorate, according to news reports, allowing it to reopen for worship as a mosque.

Reacting to the decision, Director-General of UNESCO, Audrey Azoulay, described the building as “an architectural masterpiece, and a unique testimony to interactions between Europe and Asia over the centuries. Its status as a museum reflects the universal nature of its heritage and makes it a powerful symbol for dialogue.” 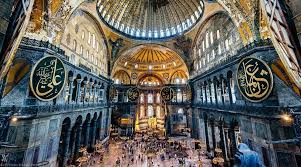 UNESCO said in a statement issued before the decree, that it had written to the Government and called for “dialogue” with the authorities, “before taking any decision that might impact the universal value of the site.”

Hagia Sophia, is part of the “Historic Areas of Istanbul”, and officially inscribed on the World Heritage List as a museum.

“This inscription entails a number of legal commitments and obligations. Thus, a State must ensure that no modification is made to the outstanding universal value of the property inscribed on its territory”, said the UN’s Educational, Scientific, and Cultural Organization. 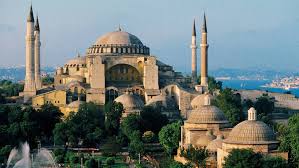 No modification ‘without prior notification’

“Any modification requires prior notification by the State concerned to UNESCO and then, if necessary, examination by the World Heritage Committee.”

“Outstanding universal value” is the basis for the decision to inscribe any property on the World Heritage List, the statement continued.

“The texts adopted by the Committee specify that the ‘Historic Areas of Istanbul’ is inscribed notably for ‘its unique integration of architectural masterpieces reflecting the meeting of Europe and Asia over several centuries’ and because ‘Hagia Sophia became a model for an entire family of churches and later mosques, and the mosaics of the palaces and churches of Constantinople, influenced both Eastern and Western art’”. 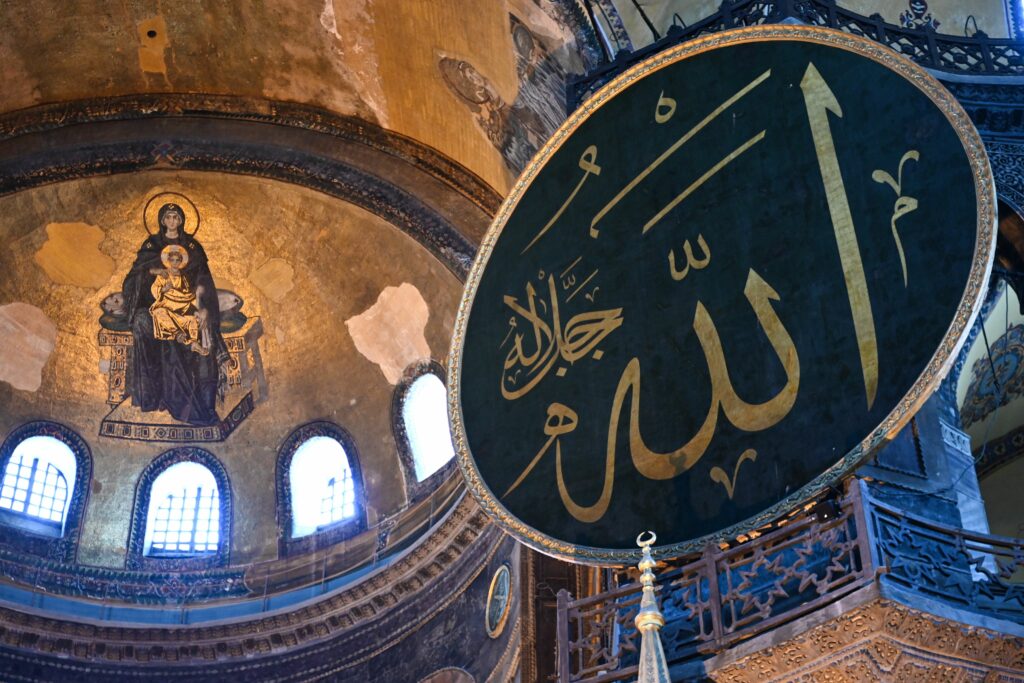 This picture taken on July 2, 2020 shows the Virgin Mary and child fresco (L) and a calligraphic Roundel with Arabic letters bearing the name of Allah and other Muslim prophets hanging on the dome of the Hagia Sophia museum, in Istanbul, Turkey. – Turkey’s top court considered Thursday 9 Jul 2020 whether Istanbul’s emblematic landmark and former cathedral Hagia Sophia can be redesignated as a mosque, a ruling which could inflame tensions with the West.
Photo by OZAN KOSE/AFP via Getty Images

The agency noted that in line with its designation, the Hagia Sophia “has a strong symbolic, historical and universal value.”

UNESCO called upon the Turkish authorities “to initiate dialogue without delay, in order to prevent any detrimental effect on the universal value of this exceptional heritage, the state of conservation of which will be examined by the World Heritage Committee at its next session.”

“It is important to avoid any implementing measure, without prior discussion with UNESCO, that would affect physical access to the site, the structure of the buildings, the site’s moveable property, or the site’s management,” stressed Ernesto Ottone, UNESCO’s Assistant Director-General for Culture. Such measures could constitute breaches of the rules derived from the 1972 World Heritage Convention, the agency warned.