Palestinians Stage Surprise ‘Thank You’ Event for Banksy in Bethlehem 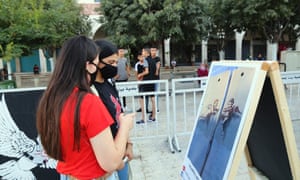 Photographs of 20 pieces of Banksy’s artwork in Palestine were displayed.
Photograph: Murad Abusrour

21 Aug 2020 – Photographs of 20 pieces of Banksy’s artwork in Palestine have been displayed in the centre of Bethlehem as a thank you to the anonymous British street artist for helping diversify tourism in the city.

The images were collated by Palestinian photographers for the surprise exhibition in Manger Square.

Artists in Gaza carved the words “Thank you Banksy” in sand on a stretch of beach to coordinate with the exhibition. Four of Banksy’s artworks are in Gaza.

“Banksy always surprises us and today I want to surprise him,” said event coordinator Yamen Elabed in a video message to Banksy on Tuesday.

Elabed said he put together the exhibition “to show Banksy that we are grateful for the support”. “I just want the message of thanks to reach Banksy … he has helped our economy with ‘alternative’ tourism.”

Last month Banksy auctioned three paintings for £2.2m in London and donated the proceeds to a hospital in Bethlehem.

Ayoub Ali, a taxi driver who attended the exhibition, said the appearance of Banksy’s work had helped to diversify tourism in Bethlehem, a major pilgrimage destination.

“They [tourists] only know Bethlehem is where Jesus was born, the Church of the Nativity – which I am proud of – but Banksy’s idea is also to see where there are 3 million Palestinians living, in the West Bank.”

About 300 people visited the open-air exhibition. Almost all were local people, as the pandemic has meant far fewer tourists.

Each visitor was given a free face mask decorated with a Banksy print on arrival.

Visits to Bethlehem have ground to a halt during the pandemic, a devastating blow to the tourist-based economy, said Elabed. “This city relies on tourism. So many people are now out of a job, with the closing of hotels, souvenir shops, many restaurants, tour companies and a lack of work for tour guides like myself. We all are just waiting for tourism to return.”

Since his first artwork appeared in Palestine 15 years ago, Banksy has become a key part of the city’s tourist attractions – his Walled Off hotel famously claiming to offer the “worst view of any hotel in the world” to a stream of international guests since its opening in 2017.

Critics have accused Banksy of trivialising the Israeli-Palestinian conflict and providing an unwelcome distraction from the work of local artists. Both Palestinians and Israelis have criticised aspects of his art. 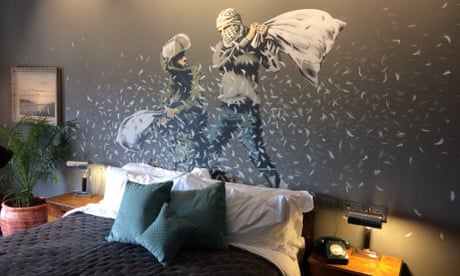 “I do appreciate deeply Banksy as an artist and love his work,” said Abdelfattah Abusrour, general director of Alrowwad Cultural and Arts Society, an arts organisation based in Aida refugee camp in Bethlehem.

But “some paintings seem naive, like the fight with pillows”, he said. “The fight was never between people as individuals, but against a system … as long as there is occupation and injustice such ‘declarations’ are irrelevant and non-respectful to the suffering of the oppressed.”

Abusrour added: “We didn’t receive a penny from the Walled Off hotel. I don’t like my cause as a Palestinian to be exploited as a business, even though I appreciate the work of Banksy.”

But visitors to the Bethlehem exhibition were enthusiastic about the artist’s involvement. “Thank you Banksy for supporting Palestinian people. Your art is much appreciated. And thank you Yamen for gathering us her here in this beautiful event,” said Amera Qumseya.

Elabed said the danger he believes Banksy put himself in when he first spray-painted the Israeli West Bank barrier warrants respect from Palestinians. “It was a risk because during the first uprising and second uprising drawing graffiti on the wall was forbidden. Many people got hurt or arrested for doing graffiti. So Banksy did a lot for Palestinians,” he said.

“We want to see him again in Palestine.”