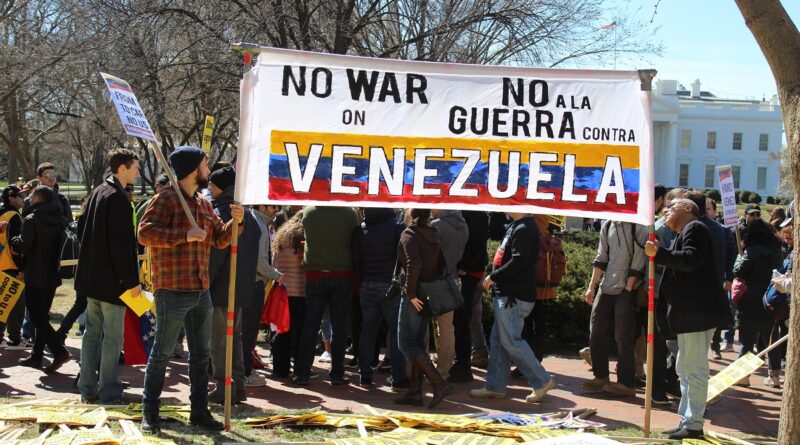 Protest against U.S. intervention on Venezuela, in front of the White House, Washington DC. Credit: https://elvertbarnes.com/16March2019

6 Aug 2020 – Elections always have an interesting effect on public policy, in particular if the person in charge of designing and implementing a certain policy is up for reelection. In politics, it is logical that an incumbent candidate decides to show successful policies and accomplishments while minimizing failures or shortcomings. However, what is irrational is that a candidate insists on presenting, preserving and deepening a policy that has proven to be a failure and that the candidate himself only supports half-heartedly. This is the case of the Trump Administration’s current failed policy towards Venezuela, which is being reinforced despite its failure while a more appropriate approach, dialogue, is being discarded.

On January 23, 2019, as John Bolton points out in his controversial memoirs, Trump advisors pushed for the U.S. Administration to recognize as “interim president”, an obscure young politician, Juan Guaidó, who represented Voluntad Popular (Popular Will), the party of Leopoldo López, Washington’s key ally who masterminded the violent protests of 2014 and 2017. Rather than produce a change of government, this action led to Venezuela’s decision to break diplomatic relations with the United States. Guaidó’s recognition has dragged the U.S. Administration, as well as many of its subordinate allies, down a path of failure after failure in their regime change policy. Furthermore, it has also dragged the people of Venezuela through a vicious blockade that has eroded their living standards and seriously jeopardized their well-being.

Over the course of 2019, the Trump Administration imagined that the whole world would dive into a collective state of denial, would stop recognizing the constitutional government of President Nicolás Maduro and would instead recognize Guaidó who in practice does not even exercise control of any institution in Caracas. A month after his self-proclamation, Guaidó, with U.S. support and propaganda, attempted to force the entry of alleged humanitarian aid into the country while hoping that the Armed Forces would at the same time betray president Maduro. They failed. On April 30, Guaidó and López, with the support of their U.S. partners and military defectors, led a failed coup attempt counting on the support of public officials that never came. This prompted Bolton to send desperate tweets and Elliott Abrams to complain because his phone calls were not answered. They failed again.

Today, more than two thirds of the Member States of the United Nations still recognize Venezuela’s legitimate government and it is Trump himself who is having second thoughts on his erratic choice. The year 2020 came, however, with an unforeseen challenge: the COVID-19 pandemic. Trump’s reelection bid was not counting on the dire impact that this pandemic would have on one of the strong points of his campaign, the economy. Even less, could he have imagined the toll this pandemic would have on the entire population: to date, over 150,000 deaths have been officially attributed to COVID-19 and a crisis with over 45 million new persons unemployed is engulfing the United States. Massive protests have taken place all over the nation, since the murder of George Floyd, an African-American man, at the hands of the police. But they are much more than protests over systemic discrimination; they are protests against a system that has abandoned the majority of its poor citizens.

Trump had in his hands a golden opportunity to show leadership, admit the shortcomings of the system and launch an unprecedented process that would redirect the priorities of the nation, cut back on the aggressive militarization of the police and of foreign policy and turn to a robust policy of relief for workers and the strengthening of the healthcare system. Instead, Trump dug himself into a labyrinth where the desperation to win the reelection clouds his thinking and rather than turning to sound domestic policy, he has opted to put the blame on foreign enemies and to divert attention from his catastrophic mishandling of the situation.

First, he placed the blame on China and resorted to a racist, Cold War-like narrative, as if this would do anything to help the suffering U.S. population. By the end of March, as the death toll increased, Trump announced he was stepping up his “maximum pressure” campaign against Venezuela. In less than a week, a man who helped justify the 1989 invasion of Panama and was now heading the Department of Justice, presented indictments against President Maduro and other top leaders of the Bolivarian Revolution for “narco-terrorism”, placing a $15 million bounty on President Maduro’s head, as in the Wild West. Then Trump’s State Department, through the voice of Elliott Abrams (whose involvement in the Iran-Contra scandal and the massacre in El Mozote, El Salvador, is notorious) proposed a “democratic transition framework” built on the principle of delegitimizing the democratic elections of President Maduro in 2018 and offered a negotiation where President Maduro’s separation from office was non-negotiable. Finally, Trump ordered the largest deployment of U.S. military to the Caribbean Sea since the Panama invasion under the pretext of fighting drug trafficking from Venezuela, when the Department of Defense’s records show that the main route for drugs to the U.S. is via the Pacific Ocean, of which Venezuela has no coast.

“Trump would do better if he followed his initial instinct of talking to President Maduro. A respectful dialogue with Venezuela is what is really in the interest of the U.S.”
— Jorge Arreaza, Foreign Minister of Venezuela

In May, a group of mercenaries attempted a raid on Venezuelan coasts. Two of them were former Green Berets who confessed to having been employed by a U.S. security firm by the name of SilverCorp. The CEO of this firm presented a contract with the signature of Guaidó and his aides to carry out actions in Venezuela aimed at removing President Maduro from office and targeting other revolutionary leaders. This too, failed, and has been followed by attempts at intimidating and effectively blocking Venezuela’s trading partners from bringing much needed supplies, including gasoline, which in a time of pandemic, is key for moving medical supplies, personnel, and food throughout the country.

Venezuela has stood firm against all of these attacks. International solidarity from countries such as Cuba, China, Russia, Iran, and Turkey has been key. Strong measures and an organized and community-conscious population have allowed Venezuela to still be one of the countries with the lowest death toll and active COVID-19 cases in the region. In sharp contrast, while Washington imposes  repression on cities such as Portland, which has suffered the deployment of federal police agents, Venezuelans will once again be heading to the polls in December with the hopes of electing a renewed parliament that better reflects the political forces in the country and one whose leadership is not compromised with the promotion of sanctions and blockades against their own country, as is Guaidó.

In the distorted view of reality that Trump and his advisors have of the current conjuncture, there is a belief that hard line, regime change policies against Venezuela would lead to electoral success in Florida and therefore, nationwide. It might well be that some of Trump’s base may like to see a coup in Venezuela, but failure after failure, by now should have indicated that Venezuela is not moving in that direction. To continue attempting clumsy solutions will only repeat past frustrations. A sound policy towards Venezuela has to be in line with the aspirations of the Venezuelan people and with the real interests of the people of the U.S. Venezuelans want peace, dialogue, and politics. Trump would do better if he followed his initial instinct of talking to President Maduro. A respectful dialogue with Venezuela is what is really in the interest of the U.S. electorate. Instead of spending U.S. taxpayer money on failed adventures and made up drug cartels, it could be better spent on dealing with the pandemic and other needs of the U.S. Sound policies are more conducive to reelection. Regime change will only lead to more failure.

Jorge Arreaza is the Foreign Minister of the Bolivarian Republic of Venezuela.