Gravitational Waves: Astronomers Spot a Black Hole so Massive They Weren’t Sure It Could Exist 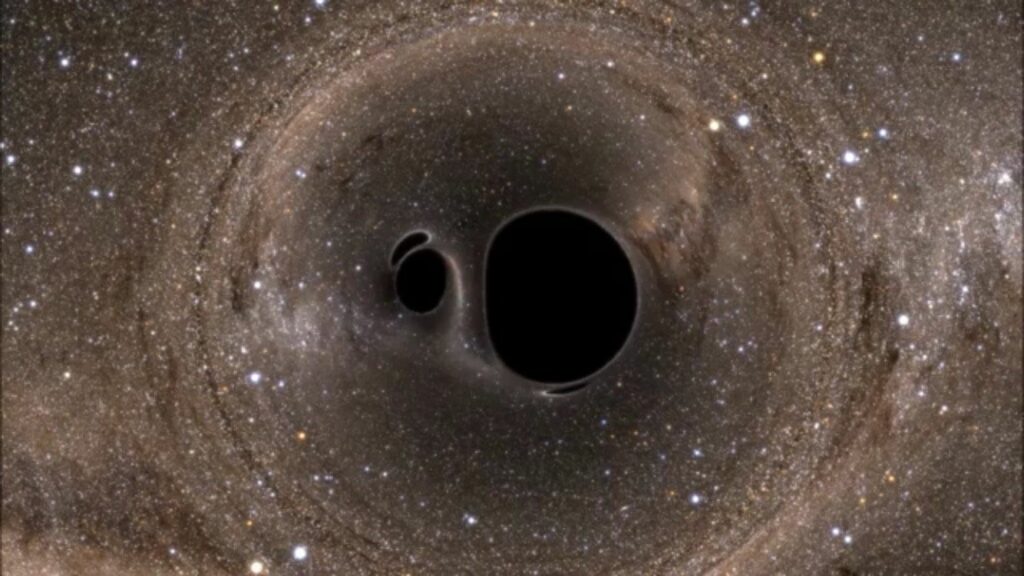 2 Sep 2020 – One of the greatest things about being an astrophysicist is that you keep discovering things you didn’t think were possible. Now the Laser Interferometer Gravitational-wave Observatory (LIGO) and Virgo Observatory have discovered their largest black hole yet. It’s important because scientists had in fact doubted whether black holes of this mass could even exist.

After months of painstaking analysis, the team has just reported their discovery in papers in the Physical Review Letters and the Astrophysical Journal Letters.

The black hole was discovered because its merger with a slightly less massive companion emitted gravitational waves. These are ripples in spacetime that can be detected on Earth – the echoes of violent cosmic collisions that, in this case, happened billions of years ago.

The finding is hugely important from a research perspective. It also settles a bet among astrophysicists. In February 2017, a number of us met at the Aspen Center for Physics in Colorado, USA. We were excited to be discussing the results that we already had from LIGO. But we were also looking forward to future discoveries and arguing about how pairs of black holes actually merge.

There were multiple ideas under discussion. One was that pairs of massive stars gradually evolve side by side until both collapse into black holes and ultimately merge. Another was that previously unacquainted black holes can be brought together by the jostling of a crowd of other stars in dense stellar regions. But which is the main process? I got several participants together to make a wager, as shown on the photo below.

At the end of their lives – when stars run out of nuclear fuel and no longer have the support pressure to counter their own gravity – they collapse. Low-mass stars, including our Sun, eventually become faint stellar ghosts known as “white dwarfs”. Stars that started out heavier than about eight times the mass of the Sun become incredibly dense and small objects called neutron stars. And really massive stars of more than 20 solar masses at birth become black holes, with final masses between a few and around 40 solar masses.

But something weird has long been conjectured to happen to very, very massive stars, perhaps those with initial masses between around 130 and 250 solar masses, whose centres get really hot (around a billion degrees Kelvin) late in their evolution. The light bouncing around inside these stars, and providing much of the pressure support, is so energetic that it can transform into pairs of electrons and positrons (positrons are the antimatter counterparts of electron – they are nearly identical but have opposite charge).

This, in turn, makes the star unstable: the pressure suddenly drops, the centre of the star contracts and heats up, and runaway nuclear fusion causes the entire star to explode in a bright “pair-instability” supernova, leaving no remnant behind.

This means that, if all black holes in merging pairs were created by collapsing stars, there should be no black holes with masses between around 55 and 130 solar masses – the stars that could have produced such remnants would have ended their lives in explosions that leave nothing behind. More massive black holes, however, can be formed from even heavier stars (of more than 250 solar masses) which do not undergo the same runaway nuclear fusion, and collapse completely into black holes.

But this wouldn’t be the case for black holes merging in a crowd. When two black holes merge, they create another black hole, almost as heavy as the sum of their masses. If this black hole remains in the dense environment it can merge again, giving rise to even more massive black holes of a range of sizes, filling in the mass gap. This is what brought us to signing this bet in Aspen: would we find a merging black hole with mass between around 55 and 130 solar masses or not?

GW190521 is a merger of two very massive black holes indeed, the heaviest of any observed so far through gravitational waves. The heavier one, measured to be between 71 and 106 solar masses (at 90% confidence), falls squarely into the mass gap. This seems to suggest that black holes do indeed repeatedly merge.

I was not involved in this marvellous measurement. But by a fortuitous coincidence I had the opportunity to referee one of the discovery papers, meaning that I am now well-prepared to perform my duties as arbiter of the bet. My first order of business is to adjudicate the wager in favour of Chatterjee and Rodriguez as well as Fred Rasio of Northwestern University, US, who joined the ultimate winners in an addendum after the original bet was signed.

Congratulations to the deserved winners – and may they enjoy the wine owed to them, and the pleasure of being proved right. The bet being resolved, my next to-do item, along with many other astrophysicists around the world, is to start thinking about the implications of this revolutionary observation.

Is this the definitive demonstration of black holes merging repeatedly in a dense cluster of stars? Could we have incorrectly estimated the boundaries of the mass gap because of uncertainty in key nuclear reactions? Could the merger have happened in completely different ways we haven’t even thought of?

The LIGO-Virgo teams have yet again done an amazing job with their instruments and data analysis, obtaining a wonderfully unexpected result. For the rest of the astrophysics community, the fun of making sense of it is only just beginning. Which is why, in such scientific bets, everybody really is a winner.