22 Sep 2020 – An explosive report published Sunday by BuzzFeed News documents the role that major US and international banks knowingly play in laundering and circulating trillions of dollars in dirty money from terrorist organizations, drug cartels and assorted international financial criminals.

The report is an unanswerable indictment not only of the banks, but also of Western governments and regulatory agencies, which are fully aware of the banks’ illegal but highly lucrative activities and tacitly sanction them.

BuzzFeed writes that its investigation demonstrates “an underlying truth of the modern era: The networks through which dirty money traverses the world have become vital arteries of the global economy. They enable a shadow financial system so wide-ranging and so unchecked that it has become inextricable from the so-called legitimate economy. Banks with household names have helped to make it so.” 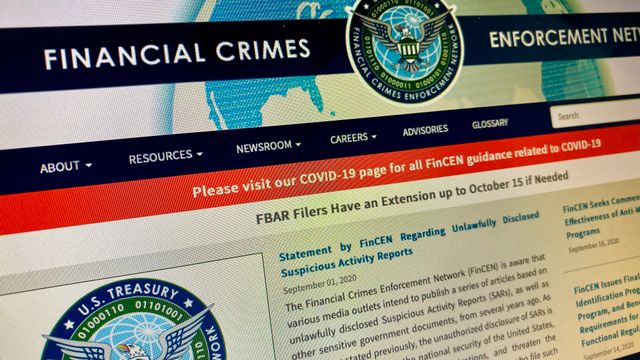 The front page of the FinCen website (Credit: Fincen.gov)

The report continues: “Profits from deadly drug wars, fortunes embezzled from developing countries, and hard-earned savings stolen in a Ponzi scheme were all allowed to flow into and out of these financial institutions, despite warnings from the banks’ own employees.

“Money laundering is a crime that makes other crimes possible. It can accelerate economic inequality, drain public funds, undermine democracy, and destabilize nations—and the banks play a key role. ‘Some of these people in crisp white shirts in their sharp suits are feeding off the tragedy of people dying all over the world,’ said Martin Woods, a former suspicious transactions investigator for Wachovia.’”

The report goes on to explain that “even after they were prosecuted or fined for financial misconduct, banks such as JPMorgan Chase, HSBC, Standard Chartered, Deutsche Bank and Bank of New York Mellon continued to move money for suspected criminals.”

The extensive report is based on more than 21,000 “suspicious activity reports” (SARs) filed by some of the world’s biggest banks with the US Treasury Department’s Financial Crimes Enforcement Network, or FinCEN, between 1999 and 2017. FinCEN makes its database of SARs available to more than 450 law enforcement and regulatory agencies across the United States.

What BuzzFeed calls the “FinCEN Files” were leaked to the news outlet more than a year ago. It has since been combing through them, in collaboration with the International Consortium of Investigative Journalists, which coauthored the report.

BuzzFeed News notes that it also shared the SARs with more than 100 other news organizations in 88 countries. The report, titled “Dirty Money Pours into the World’s Most Powerful Banks,” includes only a small and redacted sample of the news outlet’s hoard of suspicious activity reports.

The US government maintains a policy of total secrecy in relation to the SARs, refusing to release them even in response to Freedom of Information requests. Earlier this year, the Treasury Department issued a statement declaring that the unauthorized disclosure of SARs is a crime. In an obvious attempt at intimidation and threat of prosecution, the statement added that the matter was being referred to the Department of Justice and the Treasury Department’s Office of Inspector General.

The initial response of the American corporate media has been to bury or entirely ignore the BuzzFeed revelations. Monday’s print edition of the New York Times carried a report on page eight of its business section. The print editions of the Washington Post and the Wall Street Journal made no mention of the exposé.

The report is based on more than 22,000 pages of documents concerning over 10,000 subjects and involving more than 170 countries and territories. Nearly 90 banks and other financial institutions are included in the institutions that submitted the SARs.

Deutsche Bank recorded the highest total value of transactions listed in the FinCEN Files: $1.3 trillion, based on 982 suspicious activity reports.

The other banks on the top 10 list are JPMorgan Chase (whose CEO Jamie Dimon was once known as Obama’s “favorite banker”), New York Mellon, Standard Chartered, Barclays, HSBC, Bank of China, Bank of America, Wells Fargo and Citibank.

One report, filed by JPMorgan in August, 2014, lists over $355 billion in suspicious activity relating to more than 100,000 wire transfers “sent, received or transferred” over the course of a decade by MKS, a Swiss-based company that trades in precious metals.

The findings featured in the BuzzFeed report include:

● Standard Chartered moved money on behalf of Al Zarooni Exchange, a Dubai-based business that was later accused of laundering cash on behalf of the Taliban.

● HSBC’s Hong Kong branch allowed WCM777, a Ponzi scheme, to move more than $15 million even as the business was being barred from operating in three states. Authorities say the scheme stole some $80 million from investors, mainly Latino and Asian immigrants. The firm’s owner used the funds to buy two golf courses, a mansion, a 39.8-carat diamond and mining rights in Sierra Leone.

● Bank of America, Citibank, JPMorgan Chase, American Express and other financial firms processed millions of dollars in transactions for Viktor Khrapunov, the former mayor of Kazakhstan’s most populous city, even after Interpol issued an order for his arrest. Khrapunov fled to Switzerland and was later convicted in absentia on charges including bribe-taking and defrauding the city.

A separate piece by NBC News presents evidence that JPMorgan, Bank of New York Mellon and other banks helped move more than $150 million for companies tied to the North Korean regime.

In other words, the biggest US and international banks have made countless millions in profits serving as money-launderers for organizations labeled “terrorist” such as the Taliban and governments of so-called “rogue states” such as North Korea—with the knowledge and tacit approval of the governments of the US and other major powers—even as these same governments were waging or threatening war against the targeted organizations and overseas regimes.

The BuzzFeed report describes the cynical rationale behind the formality of banks filing SARs, which, for the most part, are never even read by the staff of FinCEN. Over the past decade, the number of SARs filed by major banks has sharply increased, indicating a growth of money laundering and other illegal activities on behalf of criminal clients. Over the same period, the staff of FinCEN has shrunk by 10 percent.

Banks are legally required to file a SAR with FinCEN if they suspect a transaction might be linked to illegal activity. Large banks file tens of thousands of such reports every year. In 2017, 19 large banks filed a total of 640,000 suspicious activity reports, according to a study by the Bank Policy Institute, a lobbying group.

But as the BuzzFeed report explains: “So long as a bank files a notice that it may be facilitating criminal activity, it all but immunizes itself and its executives from criminal prosecution. The suspicious activity alert effectively gives them a free pass to keep moving the money and collecting the fees.”

In its article on the FinCEN Files report, the New York Times noted that JPMorgan wired money to banks in Switzerland, Lebanon and Nigeria on behalf of a convicted money launderer, reported the transactions to British and American authorities, and continued doing business with the client. The Nigerian government is now suing the bank in British court.

This collusion between gangster bankers and capitalist government regulators is a continuation of longstanding policy. In 2012, the Obama administration refused to criminally prosecute Britain’s biggest bank, HSBC, after it acknowledged laundering billions of dollars for Mexican and Colombian drug cartels. Among the bank’s major clients was the Sinaloa Cartel in Mexico, which is known for dismembering its victims and publicly displaying their body parts.

That was in keeping with the policy of the US government of shielding top bankers from any accountability for illegal activities, including those that led to the collapse of the financial system in 2008 and ushered in what at that time was the deepest slump since the Great Depression. To this day, not a single leading executive of a major bank has been prosecuted, let alone jailed, for fraudulent activities that led to the destruction of millions of jobs and the decimation of working class living standards in the US and around the world.

As the World Socialist Web Site wrote at the time:

Here, in a nutshell, is the modern-day aristocratic principle that prevails behind the threadbare trappings of “democracy.” The financial robber barons of today are a law unto themselves. They can steal, plunder, even murder at will, without fear of being called to account. They devote a portion of their fabulous wealth to bribing politicians, regulators, judges and police—from the heights of power in Washington down to the local police precinct—to make sure their wealth is protected and they remain immune from criminal prosecution.