The US Is Using The Guardian to Justify Jailing Assange for Life–Why Is the Paper So Silent?

The charges against Assange rewrite the meaning of “espionage” in unmistakably dangerous ways. Publishing evidence of state crimes, as Assange’s Wikileaks organisation has done, is covered by both free speech and public interest defences. Publishing evidence furnished by whistleblowers is at the heart of any journalism that aspires to hold power to account and in check. Whistleblowers typically emerge in reaction to parts of the executive turning rogue, when the state itself starts breaking its own laws. That is why journalism is protected in the US by the First Amendment. Jettison that and one can no longer claim to live in a free society.

Aware that journalists might understand this threat and rally in solidarity with Assange, US officials initially pretended that they were not seeking to prosecute the Wikileaks founder for journalism – in fact, they denied he was a journalist. That was why they preferred to charge him under the arcane, highly repressive Espionage Act of 1917. The goal was to isolate Assange and persuade other journalists that they would not share his fate.

Assange explained this US strategy way back in 2011, in a fascinating interview he gave to Australian journalist Mark Davis. (The relevant section occurs from minute 24 to 43.) This was when the Obama administration first began seeking a way to distinguish Assange from liberal media organisations, such as the New York Times and Guardian that had been working with him, so that only he would be charged with espionage.

Assange warned then that the New York Times and its editor Bill Keller had already set a terrible precedent on legitimising the administration’s redefinition of espionage by assuring the Justice Department – falsely, as it happens – that they had been simply passive recipients of Wikileaks’ documents. Assange noted (40.00 mins):

During the course of the current extradition hearings, US officials have found it much harder to make plausible this distinction principle than they may have assumed.

Journalism is an activity, and anyone who regularly engages in that activity qualifies as a journalist. It is not the same as being a doctor or a lawyer, where you need a specific professional qualification to practice. You are a journalist if you do journalism – and you are an investigative journalist if, like Assange, you publish information the powerful want concealed. Which is why in the current extradition hearings at the Old Bailey in London, the arguments made by lawyers for the US that Assange is not a journalist but rather someone engaged in espionage are coming unstuck.

My dictionary defines “espionage” as “the practice of spying or of using spies, typically by governments to obtain political and military information”. A spy is defined as someone who “secretly obtains information on an enemy or competitor”.

Very obviously the work of Wikileaks, a transparency organisation, is not secret. By publishing the Afghan and Iraq war diaries, Wikileaks exposed crimes the United States wished to keep secret.

Assange did not help a rival state to gain an advantage, he helped all of us become better informed about the crimes our own states commit in our names. He is on trial not because he traded in secrets, but because he blew up the business of secrets – the very kind of secrets that have enabled the west to pursue permanent, resource-grabbing wars and are pushing our species to the verge of extinction.

In other words, Assange was doing exactly what journalists claim to do every day in a democracy: monitor power for the public good. Which is why ultimately the Obama administration abandoned the idea of issuing an indictment against Assange. There was simply no way to charge him without also putting journalists at the New York Times, the Washington Post and the Guardian on trial too. And doing that would have made explicit that the press is not free but works on licence from those in power.

For that reason alone, one might have imagined that the entire media – from rightwing to liberal-left outlets – would be up in arms about Assange’s current predicament. After all, the practice of journalism as we have known it for at least 100 years is at stake.

But in fact, as Assange feared nine years ago, the media have chosen not to adopt a “united face” – or at least, not a united face with Wikileaks. They have remained all but silent. They have ignored – apart from occasionally to ridicule – Assange’s terrifying ordeal, even though he has been locked up for many months in Belmarsh high-security prison awaiting efforts to extradite him as a spy. Assange’s very visible and prolonged physical and mental abuse – both in Belmarsh and, before that, in the Ecuadorian embassy, where he was given political asylum – have already served part of their purpose: to deter young journalists from contemplating following in his footsteps. 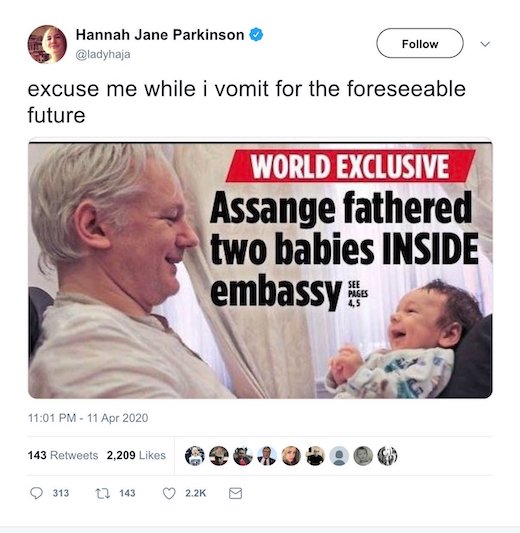 Even more astounding is the fact that the media have taken no more than a cursory interest in the events of the extradition hearing itself. What reporting there has been has given no sense of the gravity of the proceedings or the threat they pose to the public’s right to know what crimes are being committed in their name. Instead, serious, detailed coverage has been restricted to a handful of independent outlets and bloggers.

Most troubling of all, the media have not reported the fact that during the hearing lawyers for the US have abandoned the implausible premise of their main argument that Assange’s work did not constitute journalism. Now they appear to accept that Assange did indeed do journalism, and that other journalists could suffer his fate. What was once implicit has become explicit, as Assange warned: any journalist who exposes serious state crimes now risks the threat of being locked away for the rest of their lives under the draconian Espionage Act.

The BBC's Kuenssberg and ITV's Peston haven't mentioned Assange for years, even as his extradition hearing – our generation's Dreyfus Trial – is under way.

It should be proof, if more were needed, that these people aren't journalists, they are courtiers of the British state https://t.co/2ybAEkoAhz