Another Now – An Intimate Introduction

“Imagine a world with no banks. No stock market. No tech giants. No billionaires. Imagine if Occupy and Extinction Rebellion actually won. In Another Now world-famous economist Yanis Varoufakis shows us what such a world would look like. Far from being a fantasy, he describes how it could have come about – and might yet. But would we really want it? Varoufakis’ boundary-breaking new book confounds expectations of what the good society would look like and reveals the uncomfortable truth about our desire for a better world… One of my few heroes. As long as people like Varoufakis are around, there still is hope.”

Why did I write ANOTHER NOW?

As a critic of capitalism, I have long been painfully aware that critics of capitalism have no real answer to the hard question: “If you don’t like capitalism mate, what’s the alternative?” So, I decided it was time to take on two hard but pressing tasks:

·         First, to describe convincingly how a technologically advanced, free, and open postcapitalist society might function once work, control over production, land use and decision-making at all levels are authentically democratised. How would corporations, markets, money, housing, international trade & payments work.

·         Secondly, an even harder task, to demonstrate how such a set of postcapitalist social and economic arrangements might emerge worldwide from the guts of our present circumstances.

Without the capacity to envision alternatives to what we have we are at the mercy of inertia, unable even to make small improvements to our present circumstances.

Why should it be read by those who fancy capitalism?

Capitalism is, as we speak, undermining itself. Never before have profit rates been so low at a time the financiers are laughing so loudly all the way to the bank. Never before has investment been so low relative to available liquidity. The world of money has disconnected from the real economy – a sure sign that we are already in an unsustainable postcapitalist phase.

ANOTHER NOW offers, both, a glimpse of this awful postcapitalist reality as well as a blueprint for a postcapitalist system where markets are freer and healthier than ever because – as opposed to despite – having transcended capitalism.

Even if, in the end, readers disapprove of the market socialism I describe, liberal champions of free market capitalism will, I trust, benefit from becoming acquainted with it – if only because, today, in This Now, capitalism is hampered by the cartels and financial parasites which are trading illicitly in its name. 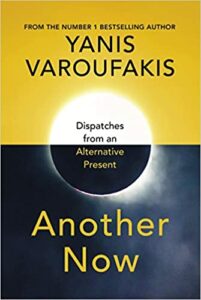 How I wrote ANOTHER NOW?

I wrote ANOTHER NOW as a political novel using the tools of science fiction.

Why as a novel, rather than a standard essay describing my utopia? Because, as is our duty when it comes to sketching a system in which real people must live, we can’t afford to be dogmatic. We need to allow disagreement within our own thinking. The beauty of a novel-like narrative is that it allowed me to populate it with characters that disagree with one another fiercely, thus allowing me to present some of the contradictory views in my head. As it turned out, the conversation between Iris, Eva and Costa – my three main characters – at some point took a life of its own. At times, while I was writing their dialogues, it felt almost as if I were sitting back, listening to them and, yes, learning from them!

Why science fiction? Because it allowed me to construct an alternative historical trajectory commencing in 2008 that resulted in ANOTHER NOW by 2013 before my characters assess it in… 2025. Thus, I was free to ‘describe’, in effect to imagine, how we could have handled the 2008 financial crisis differently. Of how instead of the Occupy Wall Street type of demonstrations, we might have built a democratic market-socialism worth fighting for.

Why does it matter?

Nothing is more disheartening than the conviction that there exists no alternative to a system in permanent crisis which is crushing our souls and flattening our spirits. This is why writing, or reading, a book like ANOTHER NOW is important to those of us who feel ensnared in a socioeconomic system which, first, holds behind the majority and, second, enriches a tiny proportion who also end up insecure, unhappy and, ultimately, alienated, from a society whose only booming industries are Discontent, Depression and Ecocide.

Even for those who disagree with my assessment of This Now, and who are far more optimistic about it than I am, have much to learn from Another Now in which power, both corporate and state, is substantially curtailed – the result being a world closer to what Adam Smith, their patron saint, was waxing lyrical about than to what passes today as free-market capitalism – and which, in reality, is a species of techno-feudalism.

On a more personal note

For years, I described myself as a Libertarian Marxist. Many, both on the Hard Right and on the Hard Left, mocked me finding rare common ground in the assertion that a libertarian cannot be Marxist and a Marxist must reject liberalism. ANOTHER NOW proves them wrong, I trust. In this I am ably assisted by my three characters and the way their views evolve between the 1980s and the book’s conclusion in 2036. Iris (a feisty Marxist-Feminist anthropologist), Eva (a neoliberal former banker turned academic economist), and Costa (a genius techie) demonstrate that there is no oxymoron here – that the only way one can be truly liberal or libertarian is by seeking to overthrow capitalism and to replace it with a socio-economic system where autonomy and democracy do not stop at the entrance of the corporations dominating our lives.

As readers of ANOTHER NOW will discover in the book’s final pages, I have no definitive answer to perhaps the greatest question: “How far are we prepared to go in order to bring about what we consider to be the good society?” The true mark of a genuine enemy of oppression and unfreedom is a readiness endlessly to agonise over this question.