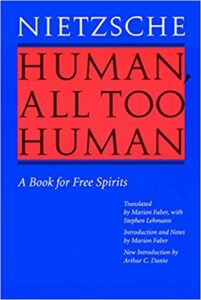 “…become master over yourself, master of your own good qualities… acquire power over your aye and no and learn to hold and withhold them in accordance with your higher aims…”

“No one can build you the bridge on which you, and only you, must cross the river of life,” Friedrich Nietzsche (October 15, 1844–August 25, 1900) wrote in his magnificent meditation on how to find yourself. But building that bridge requires a special kind of willingness, a singular capacity for self-liberation — something Nietzsche explores in his 1879 masterpiece Human, All Too Human: A Book for Free Spirits (public library | free ebook), which he aptly describes as a “discouraging-encouraging work” dedicated to the romantic ideal of the free spirit.

More than a century before modern psychologists came to pinpoint how our beliefs about human nature shape human nature, Nietzsche writes:

Such “free spirits” do not really exist and never did exist. But I stood in need of them, as I have pointed out, in order that some good might be mixed with my evils (illness, loneliness, strangeness, acedia, incapacity): to serve as gay spirits and comrades, with whom one may talk and laugh when one is disposed to talk and laugh, and whom one may send to the devil when they grow wearisome… [And] I see them already coming, slowly, slowly. May it not be that I am doing a little something to expedite their coming when I describe in advance the influences under which I see them evolving and the ways along which they travel?

Nietzsche considers how such spirits are born:

A soul in which the type of “free spirit” can attain maturity and completeness had its decisive and deciding event in the form of a great emancipation or unbinding, and that prior to that event it seemed only the more firmly and forever chained to its place and pillar… The great liberation comes suddenly to such prisoners, like an earthquake: the young soul is all at once shaken, torn apart, cast forth — it comprehends not itself what is taking place. An involuntary onward impulse rules them with the mastery of command; a will, a wish are developed to go forward… a mutinous, willful, volcanic-like longing for a far away journey…

But this vitalizing process of becoming, Nietzsche cautions, is rife with struggle and difficulty — something he considered essential to a fulfilling life. (A century later, C.S. Lewis would write: “Try to exclude the possibility of suffering which the order of nature and the existence of free wills involve, and you find that you have excluded life itself.”) Nietzsche considers the uncomfortable but necessary rupture that precipitates this breakthrough of the free spirit, and the fine line between constructive and destructive rebellion:

Things of pain and ill belong to the history of the great liberation. And it is at the same time a malady that can destroy a man, this first outbreak of strength and will for self-destination, self-valuation, this will for free will… The liberated … roves fiercely around, with an unsatisfied longing and whatever objects he may encounter must suffer from the perilous expectancy of his pride; he tears to pieces whatever attracts him. With a sardonic laugh he overturns whatever he finds veiled or protected by any reverential awe: he would see what these things look like when they are overturned.

This disposition of the true free spirit, Nietzsche argues, requires a mindset strikingly reminiscent of the Buddhist notion of non-attachment. He writes:

A man of such destiny … basks in a special fine sun of his own, with a feeling of birdlike freedom, birdlike visual power, birdlike irrepressibleness, a something extraneous (Drittes) in which curiosity and delicate disdain have united. A “free spirit” — this refreshing term is grateful in any mood, it almost sets one aglow. One lives — no longer in the bonds of love and hate, without a yes or no, here or there indifferently, best pleased to evade, to avoid, to beat about, neither advancing nor retreating…

Nietzsche traces the further unfolding of the free spirit’s journey:

A step further in recovery: and the free spirit draws near to life again, slowly indeed, almost refractorily, almost distrustfully. There is again warmth and mellowness: feeling and fellow feeling acquire depth, lambent airs stir all about him. He almost feels: it seems as if now for the first time his eyes are open to things near. He is in amaze and sits hushed: for where had he been? These near and immediate things: how changed they seem to him! He looks gratefully back — grateful for his wandering, his self exile and severity, his lookings afar and his bird flights in the cold heights… Now for the first time he really sees himself — and what surprises in the process. What hitherto unfelt tremors! Yet what joy in the exhaustion, the old sickness, the relapses of the convalescent! How it delights him, suffering, to sit still, to exercise patience, to lie in the sun! Who so well as he appreciates the fact that there comes balmy weather even in winter, who delights more in the sunshine athwart the wall? They are the most appreciative creatures in the world, and also the most humble, these convalescents and lizards, crawling back towards life: there are some among them who can let no day slip past them without addressing some song of praise to its retreating light… It is a fundamental cure for all pessimism (the cankerous vice, as is well known, of all idealists and humbugs), to become ill in the manner of these free spirits, to remain ill quite a while and then bit by bit grow healthy — I mean healthier. It is wisdom, worldly wisdom, to administer even health to oneself for a long time in small doses.

Becoming a free spirit, Nietzsche insists, requires learning “to read the riddle of that great liberation” — a liberation the fruition of which he captures in a passage nothing short of transcendent:

You had to become master over yourself, master of your own good qualities. Formerly they were your masters: but they should be merely your tools along with other tools. You had to acquire power over your aye and no and learn to hold and withhold them in accordance with your higher aims… You had to find out the inevitable error in every Yes and in every No, error as inseparable from life, life itself as conditioned by the perspective and its inaccuracy. Above all, you had to see with your own eyes where the error is always greatest: there, namely, where life is littlest, narrowest, meanest, least developed and yet cannot help looking upon itself as the goal and standard of things, and smugly and ignobly and incessantly tearing to tatters all that is highest and greatest and richest, and putting the shreds into the form of questions from the standpoint of its own well being.

In a sentiment that his compatriot Rilke would echo a generation later in writing that “the future enters into us … in order to transform itself in us long before it happens,” Nietzsche adds:

Our destiny exercises its influence over us even when, as yet, we have not learned its nature: it is our future that lays down the law to our to-day.

Complement the wholly rewarding Human, All Too Human with Nietzsche on the power of music, the importance of embracing difficulty, and his ten rules for writers.