“This is a collection of Gandhi anecdotes providing insight into different aspects of his personality. I am not the author.”  — L Gopalakrishnan 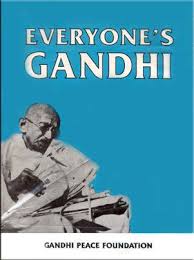 In the years since independence, an enormous amount of material on Mahatma Gandhi has been produced for children — much of it boring and of indifferent quality, though occasionally excellent as well. In spite of this, there is much in the life and work of Gandhiji that is interesting but not well-known. The Gandhi Peace Foundation therefore decided to use the occasion of the 125th Birth Anniversary of Mahatma Gandhi to bring out some material for children in an effort to re-represent the Mahatma as a flesh and blood human being (rather than an idealised, semi divine figure) placed in a historical era, with a view to re-evaluate, not only what we have inherited but where we may be heading.

At a meeting held in the Gandhi Peace Foundation, New Delhi, it was decided that the attempt take the form of a weekly syndicated column on Mahatma Gandhi for Children. The Column would perhaps be able to reach out to a greater number of children across the country.

It was also decided that the Column would refrain from using an overt moralistic self righteous tone and use a diverse range of material such as stories, letters, essays, dialogues, etc.

The Press Trust of India was approached for the purpose and very kindly agreed to transmit the column on a weekly basis, every Sunday, starting from 30 January 1995 for a year.

A core group comprising Shri Subir Shukla (who was then with the National Centre for Children’s Literature, National Book Trust), Smt. Vasudha Pande (Lecturer in History, Lady Shri Ram College), Smt. Rita Roy and Shri Babulal Sharma of Gandhi Peace Foundation was formed to work on the column and a large number of eminent Gandhians and others were requested to contribute articles, stories, and reminiscences of Gandhiji for the column. Some readily complied; others, despite several reminders, did not. For the rest, we depended on material researched and culled out from books, journals and archival material on Gandhiji.

Our sincere thanks to all those who contributed, as well as to libraries of the Gandhi Sangrahalaya and Nehru Museum who allowed us liberal use of their archival material.

The columns were transmitted regularly in English and Hindi by the Press Trust of India and Bhasha, for one year.

In the initial stages, it was largely Shri Subir Shukla who took great pains to edit the material and use all his expertise in the field of children’s literature, to present it in a form that was not only interesting and appealing to children but thought provoking as well. He was assisted ably by Ms. Shalu Kalra. Smt. Vasudha Pande went from library to library in search of materials. For Subir- and Vasudha, as well as all those who contributed, it was a purely voluntary effort — as well as a labour of love. Later on, the task of not only editing and research, but total coordination was taken up by Smt. Rita Roy and Shri Babulal Sharma. Many of the stories (which carry no credit line) were written by the team members. Smt. Perveen Kapoor and Smt. Vasantha Chandran provided secretarial assistance.

Several leading newspapers such as Hindustan Times, The Hindu, Pioneer, Hitwada, Rashtriya Sahara, Nav Bharat Times as well as certain language newspapers such as Samyukta Kamataka, Prajavani, Udayvani, Udayam and Canara Times picked up the columns. Seeing the popularity of the column the PTI asked us to continue the columns for another year, though making it more issue-based and opening it for a more general readership.

The Gandhi Peace Foundation has now decided to publish the first set of English columns in the form of a book “Everyone’s Gandhi” as part of its programme of Taking Gandhi to Schools.

We would also like to thank the Gandhi Foundation, London, for encouraging us in this venture.

It is hoped that the articles and anecdotes will serve a long felt need: to bring the Mahatma closer to us, make him a Father in every sense of the word i.e. every one’s Gandhi.

Since Mahatma Gandhi cannot be any one person’s property, there is no copyright of this publication. You are welcome to freely use portions of this book with due acknowledgement. Printed & Published by: Gandhi Peace Foundation