Why You Should Be Watching the Film ‘Z’ Right Now

Costa Gavras’s classic antifascist thriller reminds us that the moment of reckoning constitutes not the end of the story, but the beginning. 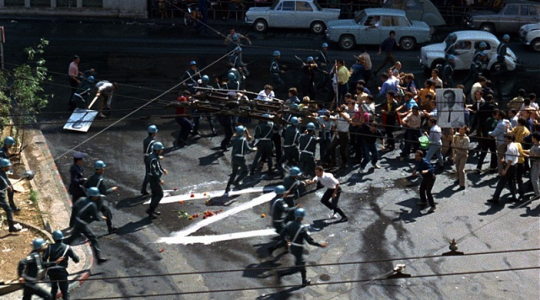 3 Nov 2020 – A half-century later, I remember the exhilaration. My Greek boyfriend and I clutched hands in the front-row balcony of Boston’s gracious Exeter Theater while convulsive music thundered up through our feet like a shock treatment. It was Mikos Theodorakis’s soundtrack to Costa Gavras’s Z, a sexy, high-voltage film that inaugurated a genre: the antifascist thriller. Z offered backstory to the 1967 junta that had just, with tacit US approval, toppled the democratically elected government in Greece and established post–World War II Europe’s most gruesome torture regime until the Republika Srpska’s Omarska camp.

Much of the junta’s success derived from its creation of ad hoc domestic-terror brigades, its members conscripted from among the country’s most economically desperate: underemployed men who might otherwise have been driven to selling their blood or their eyes to stay housed and fed. The film zeroes in on one savage attack: a charismatic opposition leader known only as The Deputy (played by Yves Montand and based on progressive legislator Grigoris Lambrakis) is jumped and bludgeoned by freelance goons on a public square in full view of the assembled and untroubled police. The Deputy later dies from his injuries.

Along comes an unlikely movie hero: the buttoned-up, robotically punctilious Magistrate (Jean-Louis Trintignant) with Coke-bottle eyeglasses and a just-the-facts manner. Though we later learn he’s the son of an officer in the military police, The Magistrate’s icy detachment makes plain he’s doing no one any favors, whether the witness he’s put in the hot seat is a street bully or a general. In the dark theater my boyfriend alternately cursed and whooped at the villains and heroes his motherland had engendered: wincing at the vainglorious imbeciles in uniform who never doubt their impermeable shield of rank, and cheering The Magistrate’s pocket-protector nerd so nimbly lining up his ducks for prosecution.

If you already know Z, you’ll remember an early scene in which a clutch of top-brass buffoons, their chests bristling with medals and ribbons, sit with upper-level bureaucrats in a government hearing room, ostensibly for an agronomy lecture. But the lecturer lards his words about “foreign mildew infestations” of the country’s vineyards with warnings about an alien-ideology attack on the minds of young workers and students. One security-forces colonel takes the mic to report: “Scientists have announced a major increase in sunspots”–a phenomenon that, the colonel claims, is the Almighty’s response to anti-war activism. “God,” he intones, “casts no light upon the communists.” Extolling the achievements of occidental Christian civilization, the colonel unveils his plan to introduce the “antibodies in the fight against infection: the honest citizens, the healthy elements of society” who happen to be that same street-recruited rapid deployment force. No need for the cops to beat up demonstrators when “honest citizens” are happy to do it for them.

The Magistrate does a breathtakingly comprehensive job of getting the goods on all the perps, from the hired muscle to the high-ranking officers, whom he charges with first-degree murder and abuse of authority. When this good news breaks, a young lawyer from the late Deputy’s inner circle hastens to the house of his widow (Irène Pappas) to exult: “It’s as if he were still alive! It’s a real revolution! The extremists will be swept away! The elections will be a landslide victory!”

It’s what happens right after the lawyer’s exuberant announcement that makes Z a must-watch film for 2020, because nothing in his prophecy turns out to be true. Seven key witnesses die suddenly of heart attacks, car crashes, industrial accidents, and an eighth-story defenestration that the police rule “an escape attempt.” The new head of state security offers assurances, in all seven cases, that “foul play is ruled out.” The two hands-on assassins end up with wrist-slap sentences, while all charges against the officers are dropped. The Magistrate is dismissed; the coup gets underway. (Christos Sartzetakis, the real-life magistrate, was later tortured and imprisoned.)

For the next seven years, a culture war invaded Greek citizens’ lives at such a banal, quotidian level that, had it not been so savagely enforced, the list would have read like outtakes from a Monty Python script. As Z chronicles in its final moments, the things outlawed included sociology, miniskirts, modern math, the Beatles, labor unions, long hair, strikes, freedom of the press, Dostoyevsky, Tolstoy, Chekhov, Twain, Beckett, Pinter, Albee—even Aristophanes, Aeschylus, and Euripides. It likewise became a crime to say that Socrates was gay.

Across the world right now, there is no shortage of such lunatic culture-war proclamations from preening heads of state, whether the orator in question is wearing plumes and ceremonial swords or overlong neckties and slogan-stamped baseball hats. These trappings feel like such obvious components of political opéra bouffe that skeptics breezily dismiss the goals of this bread-and-circus stagecraft. And on one level they’re right: the spectacles are designed to appeal to stadiums full of people for whom belligerent pomp highlighting national character and miracle cures offers momentary surcease of distress from the grim reality of disappearing jobs, addicted spouses and children, escalating community suicide rates, an encroaching pandemic, and overall diminished life expectancy.

But that endangered Rust Belt worker enjoying the risky burst of good feeling that a MAGA rally might engender is not the only category of person clinging to good-guy/bad guy magical thinking. People more educationally and economically fortunate display a troubling assurance about their own virtue as they squander critical-thinking skills on topping one another’s bleach-injection jokes, and on clever speculations about cocaine-to-blood ratios in certain unloved adult children of the White House. Ironically, this wasteful dissipation of focus and purpose derives from the fact that liberals, no less than MAGA adherents, cherish the same delusion as The Deputy’s disciples in Z: a residual belief that a savior will lead them to the promised land.

Whether people root for the narcissist in chief at a super-spreader event or keep scrupulous account of his daily Twitter mendacities, they’re evading the job of stubborn, ceaseless vigilance that citizen life requires in a plutocracy. A recent example of the cost of that distractedness: Well in advance of Ruth Bader Ginsburg’s death, multibillionaire Charles Koch had been spreading a luxurious carpet of cash to ensure that his chosen Supreme Court candidate, Amy Coney Barrett, could stroll comfortably to her new job. The signs were everywhere, but the force field around the Brand Chaos presidential candidate was so irresistible that no one seemed to hear the alarm.

Costa Gavras’s film speaks directly to the present situation not only in its depictions of right-wing thuggery but also in its portrayals of intelligent, honorable people who cherish the virtuous-leader rescue story. Consider how in Z, when political violence kills the charismatic Deputy, his followers’ hopes quickly shift to The Magistrate–the career insider ostensibly operating in apolitical service to principle. In post-Obamaland, it’s embarrassing to consider how often we have been willing to be wooed by that suitor: the good-government guy perceived as having no pony in the race, who just wants to do the right thing.

First it was then–FBI Director James Comey: Yes, he may have thrown the 2016 Democratic presidential nominee under the bus, but people quickly recalibrated their expectations to imagine he would come blazing forward with the awful truth mined from the depths of a corrupt administration. He didn’t. Then there was Robert Mueller, Comey’s predecessor at the Bureau, who excited breathless speculation about his mealymouthed demeanor: that it simply indicated an abundance of caution, because his testimony before Congress was about to scorch so many crooked careers. It turned out that Mueller’s boring surface wasn’t a disguise. And just last week, New York proposed we embrace a new career-government hero whose probity, it’s claimed, will stand immovable amid the shifting gales of ideology: Federal Reserve Chairman Jerome Powell.

And of course there’s the Democratic candidate himself—by virtue both of his own temperament and of the yearnings of his electorate—who supposedly will single-handedly clean up the house, put out the garbage and restore a climate of justice that will allow everyone to sleep soundly in their beds again.

In that critical scene in Z when the elated young lawyer brings the news to The Deputy’s widow that justice has been served, she reacts to the sunny effusion with a grim, silent gaze straight past the lawyer and into the far horizon. Whatever the outcome of the 2020 election, the corrupt interests that have profited from the catastrophes of the past four years will still be securely in place. Z teaches us that the moment of reckoning constitutes not the end of the story, but the beginning.