The Meaning of the Mittens: Five Possibilities

The symbolic power of Bernie’s old pair of mittens was the work of the “us” in “not me, us.” 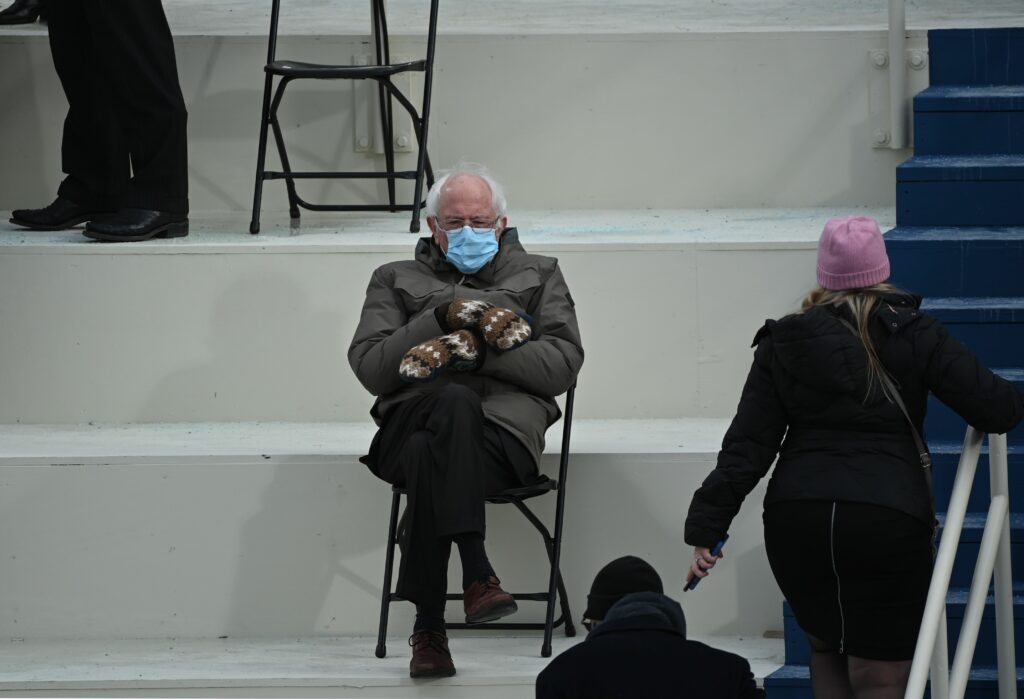 Former presidential candidate, Senator Bernie Sanders (D-Vermont) sits in the bleachers on Capitol Hill before Joe Biden is sworn in as the 46th US President on January 20, 2021, at the US Capitol in Washington, DC.
(Photo by BRENDAN SMIALOWSKI/AFP via Getty Images)

21 Jan 2021 – Pity the art directors, the stylists, and the stage managers. So much effort, taste, strategy, and money went into planning the semiotics of Joe Biden’s inauguration. The precise shade of Kamala Harris’s royal purple (screw you Vogue and your sloppy cover!). The selection of a smallish made-in-New-York brand to dress Jill Biden in ocean blue (way to support small businesses in a pandemic!). The sheer weight of Lady Gaga’s gold dove brooch (the “Hunger Games” fun of it!).

And yet it was all for naught. Because in a sea of exquisitely matching face masks, Bernie Sanders’s ratty old mittens upstaged them all, instantly becoming the most discussed, delighted-in, and deranged visual message of the historic occasion. What should we make of this? Why did so many millions connect to whatever language the mittens were speaking? Was it pandemic delirium — all of us projecting our social isolation onto the most isolated person in the crowd? Was it sexism and racism, the Bernie Bros once again failing to acknowledge the subversive messages expressed in the fashion choices of glass-ceiling shattering women? Was it, as a friend just texted as I typed these words, “the world’s secret wish that Bernie was our president”?

What is the meaning, the mittenology of it all?

As with so much else related to this new administration, it’s too soon to tell. What follows are five possibilities.

1. The Mittens as Reserved Judgment

Much of the media focus has been on the mittens themselves: their 1970s cross-country ski anti-style. Their handmade-ness in a world of mass manufacturing. Their haphazardness and the fact that Bernie clearly didn’t spare a single brain cell deciding to wear them beyond “It’s cold. These are warm.”

Just as important, however, is the posture of the mitten-wearer: the slouch, the crossed arms, the physical isolation from the crowd. The effect is not of a person left out at a party but rather, let’s be honest, of a person who has no interest in joining.

At an event that was, above all, a show of cross-partisan unity, Bernie’s mittens stood in for everyone who has never been included in that elite-manufactured consensus.

It wasn’t a boycott of the occasion itself; nobody wanted Trump out more than Bernie. But it expressed an unequivocal reservation of judgment about what was coming. Those crossed arms were the mittens saying, “Let’s see what you actually do and then we can talk about unity.”

2. The Mittens as Warning

But it was more than that. There was also, if you look closely, a woolen warning. The world went nuts for Bernie’s sullen inauguration posture because he was keeping alive the hope that there is still moral opposition to concentrated power and money in the United States — at a time when we need it more than ever.

In that moment, Bernie’s crossed arms and sartorial dissonance seemed to be saying, “Do not cross us.” If, after all the hoopla, the Biden-Harris administration doesn’t deliver transformational action for a nation and a planet in agony, there will be consequences. And unlike during the Obama years, those consequences won’t take years — because the revolutionary spirit is already on the inside, and it’s wearing mittens.

3. The Mittens as the Conscience of Liberals

Bernie’s mittens have not only been an obsession among the senator’s base, those of us who had dearly hoped to see that slab of scratchy wool placed over a Bible earlier this week. They have also been a surprising hit among liberals — many of the same liberals who spent the primaries publicly gagging over the prospect of a President Sanders (so shouty, so pointy, so angry). And yet here they are forwarding mitten memes and sharing delightful stories about how the gloves were handmade by a teacher (crafty!) or that time Bernie lent them to a chilly health care worker (a “hand-warming” tale!).

What’s up with that? Why is Bernie the dangerous socialist suddenly everyone’s lovable grandpa? On one level, it’s simple enough: Even as chair of the Senate Budget Committee, Sanders is far less of a threat to them than he was as a presidential candidate running on a promise to redistribute wealth and take the profit motive out of health care. Put another way, for the elite of the Democratic Party, it’s easy to love Bernie when he’s redistributing handmade mittens — so long as he keeps his mitts off their donors’ billions.

In some ways, it’s even useful to tolerate a scruffy wing of the party precisely because the leadership is so cut off from its working class base. In that context, publicly embracing Bernie at this late date plays a role similar to the various pseudo-populist primary season stunts, like very publicly eating fried foods you hate or wearing regular people clothing.

Which brings us to a related mitten meaning:

4. The Mittens as Street Cred

In liberal media outlets, inauguration week marked a giddy return to the Obama era of covering the first family as Davos-class celebrities. Does Biden’s Peloton bike present a security risk? Who dressed Jill Biden? Have you seen Kamala’s sister’s badass feminist sweatshirts? This strand of politician-as-lifestyle coverage had been largely dormant during the Trump era. Sure, the White House was filled with rich and thin people wearing and consuming expensive and desirable things. But they were proto-fascists and shameless grifters, so dwelling too much on Melania’s capes and Ivanka’s jewelry was a bad look.

That’s all over now. And yet nagging PR concerns remain. We are, after all, in a global pandemic and hunger is soaring — even if the ultrarich have vastly increased their wealth during this period of mass death. Enter the mittens. It’s clear that some people in the upper reaches of the Democratic Party understand that if they are going to bask in a glamorous return to neoliberal “normal,” there needs to some nod to reality. The fact that Bernie was there, in his duffle coat and mittens and disposable mask, was quickly adopted as that nod.

But don’t be fooled. Because there is another, more powerful meaning of the mittens.

5. The Mittens as Movement Flex

There are the mittens qua mittens. But there are also the mittens qua meme, a supercharging of the mittens’ symbolism that seemed to occur within seconds of their arrival on the scene. Before Gaga had sung the national anthem and before Biden had said “unity” nine times and “uniting” an additional three times, Bernie’s mittens were flying around the internet. Within hours he had been superimposed onto thousands of iconic images, spliced into films, and was trending everywhere things can trend.

It is crucial to understand that this had nothing to do with anything Bernie did — other than be Bernie in the only way he knows how. Like so much of his historic 2020 primary campaign, the symbolic power of the mittens was the work of the “us” in “not me, us,” a decentralized movement of movements that represents thousands of grassroots organizations and tens of millions of voters, and that stands for policies supported by majorities of Democratic voters, according to many polls, but are still rejected by its elite. Medicare for All, a Green New Deal, student debt cancellation, free college, a wealth tax, and more.

On Biden’s big day, the movement that represents those policies and those values made global meaning out of a pair of old mittens. It did because it could. It was a friendly little flex with a not-so-friendly undercurrent. We’re still here, it said. Ignore us, and we won’t sit nearly so quietly next time.