Republicans failed to ensure that the Texas power grid could withstand a cold snap, so the party’s broadcast arm recycled lies about wind energy to deflect blame on to Democrats. 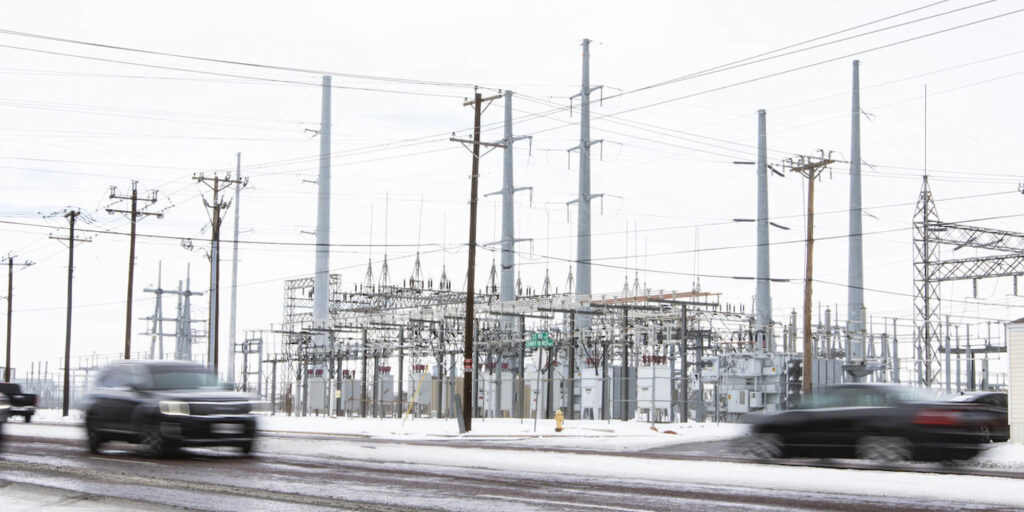 A power station in Odessa, Texas, where electricity was cut to many homes and businesses this week. Photo: Jacob Ford/Odessa American, via AP

17 Feb 2021 – Millions of Texans, trying to survive a winter storm without heat or electricity following the catastrophic failure of the state’s power grid, were at least spared immediate exposure to the torrent of lies about what went wrong in their state being pumped out by Fox News.

As the widespread blackouts continued, so too did the all-out campaign of lying on behalf of the fossil fuel industry from Fox News hosts and Republican elected officials in Texas, who repeated the false claim that frozen wind turbines were to blame, hour after hour, even though wind energy is expected to power just 7 percent of the state’s grid in winter.

At the end of one report from Texas on Tuesday, Fox News anchor Harris Faulkner interjected, falsely, that “millions of Americans, in the cold and dark, say the lack of power is because of green energy policies and the vilification of oil, gas, and coal — the stuff that really keeps you warm.”

Here's what Fox News is for: having a trusted voice of authority repeat talking points developed in advance of the crisis in Texas by fossil fuel lobbyists and passing them off as just good common sense (via @LisPower1) pic.twitter.com/eoSYqxJbAh

Later that night, Tucker Carlson began his show with the preposterous lie that, “unbeknownst to most people, the Green New Deal came to Texas. The power grid in the state became totally reliant on windmills. Then it got cold and the windmills broke.”

That’s not remotely true of energy policy in a state entirely controlled by Republican elected officials in thrall to the financial support of the fossil fuel industry.

Then again, Carlson had just warned viewers at the start of his show that some figures in the news media are “profoundly dishonest.” (“Imagine if lying was your job,” he said with a straight face. “Imagine forcing yourself to tell lies all day about everything in ways that were so transparent and so outlandish that there is no way that people listening to you could possibly believe anything you said. Then imagine doing that again and again, and again, every day of your professional life for your entire life.”)

In fact, despite what Faulkner and Carlson and Texas Republicans like Rep. Dan Crenshaw claimed, the drop in energy produced by wind was the least significant factor in the Texas blackouts, according to Dan Woodfin, senior director of system operations at the Electric Reliability Council of Texas, or ERCOT, the organization that manages the state’s power supply. Frozen instruments at thermal power plants, which burn natural gas or coal or rely on nuclear reactors, erased nearly half of the power needed to keep the lights on, according to a detailed analysis of the grid operator’s data by Jesse Jenkins, a macro-scale energy systems engineer who teaches at Princeton.

As Jenkins explained on Twitter, even though wind turbines were operating at about two-thirds of their capacity, wind was expected to provide less than 10 percent of the energy needed to power the state’s grid during the peak of a winter storm, while natural gas plants were supposed to provide 66 percent of the power. “Those of you who have heard that frozen wind turbines are to blame for this, think again,” the engineer added.

“Texans were counting on natural gas and coal plants to be there when they needed them,” Jenkins observed. “Only 50-60% of that capacity has been able to produce during the past three days. If a student in my course got a <60% on the midterm, we’d call it an F. Fossil generators deserve an F here too.”

“The failure to plan for and weatherize against this extreme cold,” Jenkins wrote earlier in the week, “extends from the grid operator (ERCOT), individual power plant owners of almost all types (gas, coal, nuclear, wind), pipeline utilities (which froze up) and even building design and construction practices (limited insulation for cold weather) which makes Texas gas and electricity demand extremely sensitive to cold weather events.”

Ed Hirs, who teaches energy economics at the University of Houston, told the Houston Chronicle that the underlying cause of the failure was the state’s deregulated power grid, which offers no incentives to power plant operators to prepare for winter. “The ERCOT grid has collapsed in exactly the same manner as the old Soviet Union,” Hirs said. “It limped along on underinvestment and neglect until it finally broke under predictable circumstances.”

Texas Democrat and former presidential candidate Beto O’Rourke argued on MSNBC on Tuesday that the state’s elected Republican leaders have been so obsessed with “stupid culture battles” instead of governing that they failed to require Texas power companies to insulate their equipment, so that natural gas plants and wind turbines that function perfectly well in far colder climates are not knocked offline by cold weather there.

Illinois is full of wind turbines and they work fine in the snow an ice, Dan. https://t.co/aac3rkwiSr pic.twitter.com/tKW3Md9YLt

Texas Gov. Greg Abbott proved O’Rourke right an hour later by taking time away from actually dealing with the crisis that had plunged over 4 million Texans into the cold and the dark to lie about it to viewers of Sean Hannity’s Fox News program.

Texas Gov. Abbott blames solar and wind for the blackouts in his state and says "this shows how the Green New Deal would be a deadly deal for the United States of America" pic.twitter.com/YfVwa3YRZQ

“I’m not against wind turbines, but my question is,” Hannity asked Abbott, teeing him up to blame renewable energy sources, “if you have these rolling blackouts, and you’ve got freezing weather and they’re not reliable … what good is it?”

“This shows how the Green New Deal would be a deadly deal for the United States of America,” Abbott replied, in what was obviously a pre-scripted talking point. “Our wind and our solar got shut down, and they were collectively more than 10 percent of our power grid, and that thrust Texas into a situation where it was lacking power on a statewide basis,” Abbott said, as if the much larger failures of the gas plants hadn’t happened. “It just shows that fossil fuel is necessary,” the governor concluded in words that could have been written by an industry lobbyist.

“The infrastructure failures in Texas are quite literally what happens when you *don’t* pursue a Green New Deal,” Rep. Alexandria Ocasio-Cortez, the New York Democrat who introduced the legislation to develop renewable energy responded on Twitter. “Weak on sweeping next-gen public infrastructure investments, little focus on equity so communities are left behind, climate deniers in leadership so they don’t long prep for disaster,” she added. “We need to help people *now.* Long-term we must realize these are the consequences of inaction.”

The lies about wind turbines repeated by Abbott, Hannity, and Carlson did not materialize out of thin air.

Paid apologists for the fossil fuel industry have worked for years to promote the false claim that clean, renewable energy sources like wind and solar are just not reliable enough to provide electricity during severe weather events.

Alex Epstein, an energy industry communications consultant who develops talking points to help clients promote the burning of fossil fuels, suggested this week that oil and gas industry boosters should say: “The root cause of the Texas blackouts is a national and state policy that has prioritized the adoption of unreliable wind/solar energy over reliable energy.”

In his book, “The Moral Case for Fossil Fuels,” Epstein repeatedly refers to wind and solar power as “unreliable.”