One of the most interesting and potentially significant conflicts to happen in some time — not just financially but culturally and politically — deserves serious scrutiny. 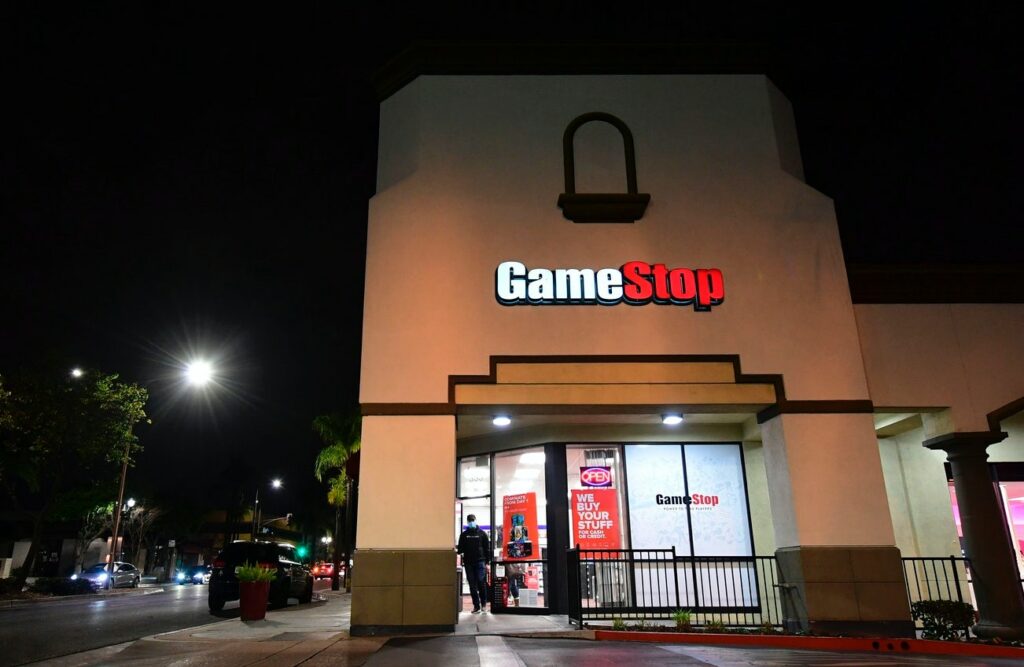 A GameStop store in Alhambra, California on January 27, 2021
(Photo by FREDERIC J. BROWN/AFP via Getty Images)

28 Jan 2021 – A remarkable series of events culminated in at least one major Wall Street hedge fund on the verge of insolvency and widespread anxiety and even panic from the titans of the financial system. It was all initiated on a sub-group of Reddit known for its heterodox interest in stock markets, video games, and vaguely populist politics.

Purposely targeting the stock of a company that had long been written off by Wall Street and which short sellers had decided to ravage — the video game retailer GameStop — these small investors, many apparently working class or debt-ridden, banded together to drive up the stock price of that company into the stratosphere, abruptly leaving the hedge fund short-sellers with billions of dollars in losses.

Although it may be more complex than this once all the facts are all known, this is being treated — by those excited by it and those aghast — as a type of populist uprising, a David v. Goliath tale in which ordinary people united to brilliantly beat Wall Street at its own game, thereby transferring plutocratic wealth back to the public. Oligarchs and their media spokespeople spent all day on CNBC and other pro-Wall-Street outlets expressing outrage and demanding government intervention to protect them from what they regard as this grave injustice.

And the sub-Reddit has now been banned by at least one platform, on the highly suspicious ground that it was due to “hate speech” and not the use of this group to sabotage Wall Street billionaires (what a remarkable coincidence of timing that this sub-Reddit’s “hate speech” suddenly crossed a line exactly as hedge fund managers were demanding their heads; the page continues, however, to appear on Reddit itself).

In the video below, I discuss what happened and what the implications are. One note about the video: though I do discuss the amorphous and trans-ideological politics driving both the Reddit uprising and the reaction to it, that topic in particular merits much more consideration. Liberal journalists and pundits love to mock the idea that “economic anxiety” drives anything remotely adjacent to right-wing populism — the primary drivers are racism and other types of bigotry, they insist in unison — yet all one has to do is spend any non-trivial amount of time in that sub-Reddit to see genuine and significant levels of rational economic anger often quite untethered, even hostile, to left-liberal cultural pieties and political niceties. Given their recent noble success, everyone now wants to claim these Redditors as their own, but their politics, like many people’s, defy the clean left-right dichotomy on which the professional media and punditry classes depend, the only prism through which they can understand the world.

This is one of the most interesting and potentially significant events — not just financially but culturally and politically — to happen in some time, and I try here to explain the key components and highlight some of the most consequential implications [note that this video was filmed late last night before the banning of the sub-Reddit by Discord on obviously specious grounds and, far worse, the corrupted banning this morning by major trading platforms, including RobinHood, of any attempts to buy GameStop and other targeted stocks while still allowing them to be sold: the ultimate expression of what should be illegal market manipulation to protect hedge funds):

Glenn Greenwald is one of three co-founding editors of The Intercept. He is a journalist, constitutional lawyer, and author of four New York Times best-selling books on politics and law. His most recent book, “No Place to Hide,” is about the U.S. surveillance state and his experiences reporting on the Snowden documents around the world. Prior to co-founding The Intercept, Glenn’s column was featured in the Guardian and Salon. He was the debut winner, along with Amy Goodman, of the Park Center I.F. Stone Award for Independent Journalism in 2008, and also received the 2010 Online Journalism Award for his investigative work on the abusive detention conditions of Chelsea Manning. For his 2013 NSA reporting, he received the George Polk Award for National Security Reporting; the Gannett Foundation Award for investigative journalism and the Gannett Foundation Watchdog Journalism Award; the Esso Premio for Excellence in Investigative Reporting in Brazil (he was the first non-Brazilian to win), and the Electronic Frontier Foundation’s Pioneer Award. Along with Laura Poitras, Foreign Policy magazine named him one of the top 100 Global Thinkers for 2013. The NSA reporting he led for the Guardian was awarded the 2014 Pulitzer Prize for public service. Glenn is an animal fanatic & founder of HOPE Shelter.