Economic Value of Peace 2021: Measuring the Global Economic Impact of Violence and Conflict

27 Jan 2021 – This report by the Institute for Economics & Peace (IEP) estimates the economic impact of violence and conflict on the global economy. In 2019, it was estimated to be $14.4 trillion in constant purchasing power parity (PPP) terms. This is equivalent to 10.5 per cent of the global gross domestic product (GDP) or $1,895 per person.

The comprehensive methodology includes 18 indicators covering the direct and indirect costs of violence, and the expenditures to contain and prevent violence. The model also includes a multiplier for the direct costs to account for the additional economic activity resulting from a redirection of these costs to more productive pursuits.

The economic impact of violence provides an empirical basis to better understand the economic benefits resulting from improvements in peace. Estimates are provided for 163 countries and independent territories, covering over 99.5 per cent of the global population. It uses the best available data to calculate the overall impact. However, not all categories of violence have reliable data, therefore preventing their inclusion in the model. Some examples of costs excluded from the model are counter-terrorism and intelligence agency expenditures, insurance costs, lost business opportunities and family violence. As such, the estimates presented in this report are considered highly conservative.

In 2019, the economic impact of violence decreased by $64 billion from the previous year. This was the equivalent of a 0.4 per cent decrease and was largely driven by reductions in Armed Conflict. This fall predominantly occurred in the Middle East and North Africa region and was driven by fewer terror attacks, conflict deaths, and population displacement costs.
This is a continued reversal of previous periods where between 2012 and 2017, the global economic impact of violence rose by 12.2 per cent to peak at $14.8 trillion. This is the second consecutive year of improvement.

Violence has adverse implications for the broader economy, both in the short and long term, as it hinders productivity and economic activity, destabilises institutions and reduces business confidence. These all disrupt the economy, resulting in adverse and ongoing negative effects well after the conflict subsides. These effects include reduced GDP growth, a less predictable economy, higher levels of unemployment, lower levels of foreign direct investment and higher interest and inflation.

Since 2007, 85 countries have recorded decreases in their economic cost of violence compared to 78 that increased, highlighting that more countries have become less burdened by the economic impacts of violence over the longer term. For most countries that improved, there was significantly less expenditure on the military and internal security, as well as the reduced economic burden of homicides. Furthermore, the countries that deteriorated recorded an average deterioration of 3.9 percentage points of GDP, whereas the countries that improved, improved on average by 1.9 percentage points. This indicates that only a small number of countries had large improvements.

Since 2007, the overall economic impact increased by $405 billion driven by increases in the military and internal security in some of the largest economies, including China and India. However, some other large economies reduced their military expenditure over the same period, including the United States and the United Kingdom.

In 2019, the economic impact of violence improved across four regions — MENA, South Asia, Asia-Pacific and Russia and Eurasia. MENA recorded the largest improvement from 2018 at 6.9 per cent, driven by the de-escalation of violent conflict in the region. The economic impact worsened in five regions in 2019, most notably, Central America and the Caribbean. The deterioration in Central America and the Caribbean was attributed to the rising homicide rate, which subsequently led to an 8.3 per cent increase in the region’s economic impact. This was the only region to see an increase in its economic impact of homicide, other than South Asia and neighbouring South America. 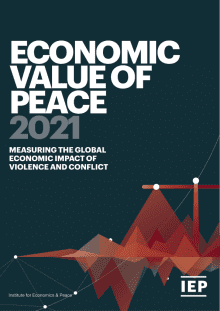