Lula’s Return Could Save Brazilian Democracy

With former Brazilian president Lula da Silva now eligible to run in next year’s election, Jair Bolsonaro’s grip on power is looking weaker than ever before. Amid the tide of reaction, Lula’s return means there is finally some hope for democracy and social justice in Brazil. 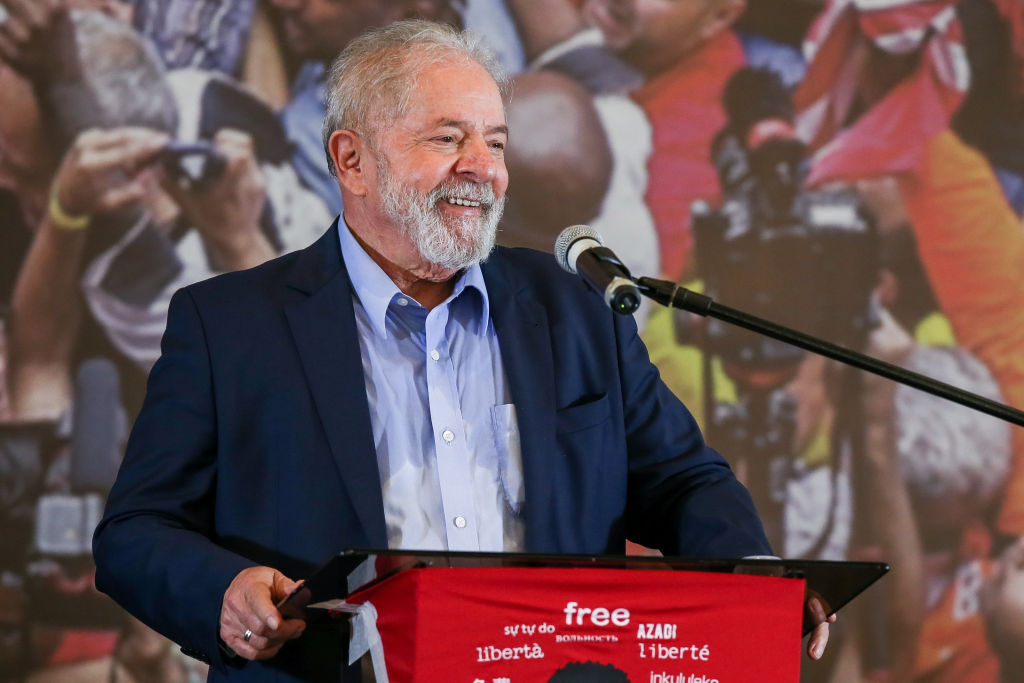 Luiz Inacio Lula da Silva, Brazil’s former president, speaks during a press conference after convictions against him were annulled at the Sindicato dos Metalurgicos do ABC on March 10, 2021, in Sao Bernardo do Campo, Brazil.
(Alexandre Schneider/Getty Images)

13 Mar 2021 – On March 8, Brazil was greeted with the unexpected news that Supreme Federal Court justice Edson Fachin had annulled all convictions of former president Luiz Inácio Lula da Silva. Prior to that decision, Lula was still facing indictment and minor offense convictions, making him ineligible for political office under Brazilian law. The court’s enormously significant decision makes Lula eligible to run in the 2022 presidential race, though it still remains for the indictments to be definitively withdrawn.

Despite the fact that Lula was released from prison in 2019 on the heels of the Vaza Jato (Car Wash) leaks, the decision that freed him was not based on The Intercept’s revelations of legal conspiracy. Instead, he was released after 580 days thanks to a Supreme Federal Court (STF) ruling that anyone in the process of a legal appeal should remain free during trial proceedings (a ruling that reversed the STF’s previous decision in the run-up to the 2018 elections, made under duress from the military and in violation of the Constitution).The decision to release Lula resolved, as it were, two issues. On the one hand, it freed the Brazilian justice from the embarrassment of keeping Lula in prison, after it was revealed by the actions of a hacker that then-judge Sérgio Moro arranged the conviction with the accusers. On the other hand, it spared Moro, who at that time was Bolsonaro’s minister of justice, the biggest beneficiary of Lula’s arrest, since the judicial plot, although it served as a backdrop, was not the reason for Lula’s release.

While the most recent turn of events is certainly a victory for Lula, the decision represents yet another attempt by the STF to avoid further investigation into the abuses committed during Operation Car Wash. Its decision rested on the technical ruling that Lula could not be tried in the city of Curitiba — not on the fact that he was the victim of collusion between Moro and federal prosecutors. As if to prove that point, efforts led by Justice Gilmar Mendes to reach a decision on alleged collusion were blocked on March 9 by Justice Kassio Nunes Marques, Bolsonaro’s appointee to the Brazilian supreme court.

A Ruling for Freedom, and a Half-Truth

The rationale for Justice Edson Fachin’s decision is simple: Lula’s defense filed a habeas corpus and the justice — alone, as is allowed in such circumstances — decided that a Federal Court of Curitiba was not competent to judge the case. The decision is absolutely correct, but also ironic, since the famous 13th Court of the Federal Judiciary in Curitiba has presided over every type of indictment with only the remotest — and often dubious — connection to corruption in the state-owned Petrobras corporation. These corruption trials have been treated as one enormous, monolithic scheme — even though Petrobras itself is not based in Curitiba but in Rio de Janeiro.

On the other hand, the bribes that Lula allegedly received — in exchange for what, Sérgio Moro himself claims to have no knowledge — had nothing to do with Curitiba, and Lula has never lived nor done business in the capital city of Paraná. As jurist Lênio Streck reminds us, the Curitiba court, then under Moro’s control, was always incompetent to judge Lula.

Before even getting to the question of possible — some would say blatantly evident —abuses of legal conduct, the most absurd part of the Lava Jato proceedings has always been that the 13th Court in Curitiba has freely determined what it deems to be linked to the Petrobras case.

This goes against the constitutional guarantee of court jurisdiction, whereby Brazilian criminal procedural law establishes a determinate place where a certain indictment can be filed and accordingly judged.

Following Justice Fachin’s decision, any cases involving Lula’s alleged misfeasance —concerning the Guarujá apartment, the Atibaia ranch, or the Lula Institute — would have to be sent to the Federal Court in Brasília, where the cases would again be subject to review. That is, unless the attorney general of the republic decides to appeal and forces Fachin’s decision to be sent back for retrial by the other eleven STF justices.

But the central issue is still being avoided: then-judge Moro and the federal prosecutors were regularly comparing notes, combining investigations, planning convictions, and pressuring defendants and witnesses with the ultimate goal of arresting Lula.

In 2019, Brazil’s top story was the “Vaza Jato.” In that report, leaks initially published on The Intercept Brasil’s website revealed how judges and prosecutors of the Car Wash investigation had held private conversations on Telegram, arranging convictions, settling plea bargains, and engaging in other conspiratorial activity.

It was clear that the driving obsession for the investigation had nothing to do with putting an end to bribes. Instead, their sole intent was to imprison Lula and bar him from competing in the 2018 elections (where he had been leading in the polls). Lula was ultimately convicted in appeals courts, imprisoned, declared ineligible for political office, and even banned from giving interviews. Jair Bolsonaro went on to win that race and appointed Moro, the main judge of the Car Wash operation, as his minister of justice.

Vaza Jato changed everything in Brazil. However, following the leaks, Brazilian politics became a laboratory for Orwellian exercises in misinformation (foreshadowing similar practices of disinformation during the pandemic). Throughout 2019, Moro, then acting as Bolsonaro’s minister and ally, regularly attacked The Intercept and cast doubt on the veracity of the leaked material while claiming himself to be the victim of hacking.

At the same time, journalist Glenn Greenwald, then editor-in-chief of The Intercept Brazil, became the victim of a widespread smear campaign. It was only through the intervention of the STF itself that Greenwald was not indicted for publishing the reports.

Walter Delgatti, the hacker responsible for leaking the material to the media, was also arrested. Delgatti’s illegal arrest was especially outrageous: while it was deemed a crime to divulge clandestinely held conversations in the midst of a public trial, the actual content of those conversations was conveniently overlooked. The scandal quickly escalated, making it virtually impossible to keep Lula in prison.

Bolsonaro and his networks protected Moro, launching attacks against Lava Jato whistleblowers. However, behind the scenes there was growing friction between the two figures: Moro had his own presidential ambitions and was jostling with Bolsonaro for leadership of the radical right. Moro conveniently parted ways with Boslonaro over his mismanagement of the pandemic, cutting the umbilical cord that had once linked the Car Wash investigations and the Bolsonaro-led far right.

The material discovered by Delgatti did, however, end up in the hands of the STF, which recently granted Lula’s lawyers access to all excerpts pertaining to his case; the principle of law holds that illegal evidence cannot serve for conviction, but it can absolve the accused.

It is also worth noting that the STF’s sudden about-face conceals other issues. According to recent interviews given by Delgatti, the Car Wash scandal was used to coerce STF justices, potentially even leading to their arrest. These embarrassing revelations led to a new threat of arrest for the hacker, who remains to this day under house arrest.

In truth, the scope of the leaks is even worse than what was revealed in the press in 2019: they contain proof of illegal collaboration between Brazilian prosecutors and foreign authorities, including the US State Department.

More recently, the STF has come under attack from Bolsonaro himself. Even so, the corporatist spirit of the Brazilian justice system — one of the most expensive and elitist in the world — has carried the day, and, as suggested by the mocking comments of conservative president of the House of Representatives Arthur Lira, it has ultimately served to protect Moro.

The Arc of Justice Is Long

The decision of Justice Fachin to annul Lula’s convictions is more than just a lesson in how the legal system operates. It is a symptom of the country’s political predicament. The STF is on the ropes and forced to take radical measures (see, for example, the decision to arrest a Bolsonaro-loyal congressman who issued public threats against STF justices). Bolsonaro, for his part, makes no effort to conceal his resentment of the Supreme Court justices who have managed to restrain his power.

The growing severity of COVID-19, the federal government’s disregard for the thousands of lives lost, delays in vaccinations, and the harbinger of economic collapse make Lula an increasingly attractive option for president. (Over the course of just three months in 2009, Lula managed to get eighty million people vaccinated — more than in any other country — against the H1N1 virus, and all through a public health system.)

It may be too early to tell, but the rapid advance of the Brazilian crisis could very well augur a new outlook among the country’s oligarchy. As the health crisis reaches a tipping point where even elite hospitals are collapsing, the ruling class may begin to revise the wisdom of its longstanding anything-but-the-Workers-Party stance. Public statements like that of former president Fernando Henrique Cardoso — who expressed regret for remaining neutral during the 2018 run-off elections — are part of this changing picture in Brazilian politics.

It should also be stressed that Lula’s 2019 release and his most recent victory are, at least in part, products of an intense international solidarity movement, as well as a broad Brazilian leftist movement. There is a growing consensus among progressives that the Brazilian justice system is unreliable and that the Car Wash scandal is akin to a McCarthyist campaign with international repercussions throughout South America, where similar legal tactics have been used against current and former progressive leaders.

It is still too soon to predict outcomes with any certainty, but it should be noted that the Brazilian crisis and Lula’s release have occurred while the broader region is seeing a new progressive wave, with left-wing electoral victories being registered across the continent. Lula will still have to face many new battles, and victory will ultimately depend on whether popular forces can be mobilized to put pressure on opaque and undemocratic institutions. But his struggle is a collective one and will be of central importance for the Brazilian working class — and the world — in the fight against new and even deadlier forms of far-right ascendency.

Hugo Albuquerque is the publisher of Jacobin Brasil.

Translator Nicolas Allen is a Jacobin contributing editor and the managing editor at Jacobin América Latina.