Naomi Klein: ‘We Shouldn’t Be Surprised That Kids Are Radicalised’

With How to Change Everything, the activist has written her first book for young people. She explains how she has been inspired by a new, very young generation of protesters. 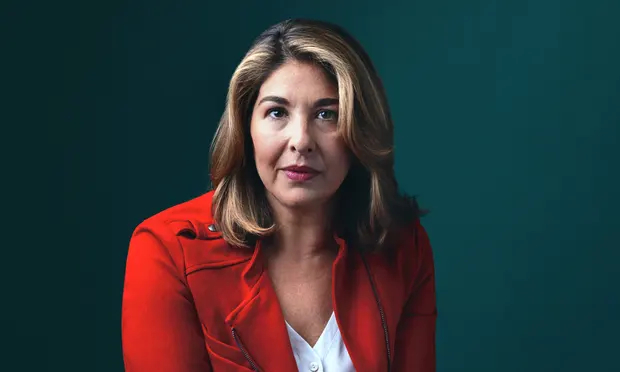 Young activists really bridle against this idea that their job is to give hope to older people’ … Naomi Klein.
Photograph: Adrienne Grunwald/the Guardian

9 Mar 2021 – When Naomi Klein toured North America with her 2019 book about the Green New Deal, she and her assistant liaised with local campaigners from the Sunrise Movement. This youthful climate action group was organised to set up a table at each event, with petitions and actions, so audiences could become activists, right there. When they reached Palo Alto, they discovered that the Sunrise Movement contact they’d been “bossing about” was a 13-year-old, who was organising the whole thing between her classes.

This shock inspired Klein, who began her activism in her 20s with the anti-corporate bible No Logo, to write her first book specifically for young people. How to Change Everything joins a burgeoning library of new books seeking to mobilise a new generation: alongside the iconoclastic Jay Griffiths’ Why Rebel, and youthful activist Hendrikus van Hensbergen’s How You Can Save the Planet, an excellent down-to-earth handbook for teens and pre-teens.

Klein describes her books as “ammo for activists” and she tells her increasingly precocious readers that there are three fires in the world today: climate change, rising anger, fear and anti-immigrant sentiment, and young people. This third fire might save us all. “The more sparks the fire has, the brighter it will burn,” she writes. “I invite you to add your spark.”

For all that, How to Change Everything is not incendiary in tone but a calm, detailed exposition of the climate crisis and what we can do about it. Adults will find it a useful primer when our understanding of the importance of climate justice or the shortcomings of carbon capture and storage fails us.

Given her accumulated wisdom over 25 years of activism, it is tempting to view Klein, 50, as a mother figure for the latest wave. But that might wrongly imply that she is didactic or unwilling to learn from the young. Speaking from her home in British Columbia, Canada, Klein believes that social media makes it “infinitely harder” for young activists today than when she experienced the “incredibly overwhelming” success of No Logo in 1999.

“When I look at Alexandria Ocasio-Cortez and Ilhan Omar and this new generation of political leaders, I don’t know how they cope with that amount of input, both positive and negative, and still keep their centre. And they do.” Partly, she thinks, it is because youth leaders “have each other’s backs”. She gives the example of Disha Ravi, the 22-year-old Fridays for Future activist in India, who was arrested and charged with sedition and criminal conspiracy. “One of the most amazing things is the way the Fridays for Future movement globally rallied around her,” says Klein. “They’ve woven this incredible truly international web of children and young adults. Frankly, its internationalism puts the adult climate movement to shame.”

Klein’s vision of activism was changed by the words of another young activist, Tokata Iron Eyes, who was only 13 when they first met at Standing Rock in Dakota. “I feel like I have my future back,” Tokata said when her Sioux community won its first battle against an oil pipeline threatening their water supply.

“This is what people are fighting for – their right to a future,” says Klein. “And it’s such a deep right. That’s realigned a lot of the writing that I do. It’s about the right to a future.”

Klein and everyone else with a 1960s, 70s or 80s childhood, was raised with a terror of nuclear war. Many people – including Klein’s family – protested against future-ending nuclear weapons. Are today’s youthful fears any different? US college students who were drafted for the Vietnam war felt their immediate future was in jeopardy too, says Klein, but she thinks that today’s young feel profoundly “unprotected” – not because of accidents or mistakes, but by the normal functioning of the political and economic system: “I grew up with nuclear fear where something could go wrong, somebody could push a button, and we would be in peril. Whereas with the climate crisis, it’s the system literally just continuing to do business as usual that brings us to collapse. The system itself is a failure. The system itself needs to change. And that is what is radicalising.”

Another young person who is radicalising Klein is her eight-year-old son, Toma. “He’s changed me in lots of ways,” she says. “He challenges our consumption. We call him the garbage police, because he hovers over to make sure that nothing is being wasted. And he got us composting at home.”

Four years ago, Klein took Toma on a work trip to Australia and a diversion to experience the wonder of the Great Barrier Reef. Their visit coincided with a bleaching event, a mass coral die-off caused by global heating. “I felt a mixture of joy and heartbreak,” wrote Klein, “because I knew that just as he was discovering the beauty of our world, it was draining away.”

Klein kept this brutal reality from her son but couldn’t shield him from the climate crisis more recently. Last autumn, Toma’s school reopened in the midst of the Covid pandemic when the area was smogged with wildfires. “And so the teachers faced this impossible dilemma: do we keep the windows open to keep air circulating because of Covid? Or do we close the windows to protect the kids with asthma from the wildfires? For kids on their first day of school, that’s what the adults around them were talking about. We shouldn’t be surprised that they’re radicalised.”

Some parents worry about how to explain global environmental crises to young children; one guide suggests that planetary ills should not be taught to under-10s. My seven and nine-year-olds are moved to desperate tears by today’s more hard-hitting David Attenborough documentaries, and Klein admits she withholds these from her son.

“In an ideal world, we would wait till 10,” says Klein. “The reality is, sometimes we just can’t protect them, because climate change is real and it’s affecting our communities.” With Toma, she’s tried to talk about pollution on a scale that he can understand: “We lay down principles – that our actions have consequences. And I mostly see my role as giving him opportunities to connect to the natural world, so that he knows what he’s fighting to protect, and whatever he is able to do comes from a place of love, and not only fear.” She’s also taken him on a (successful) local action, to stop a gas-fired power station. “I try to protect him from hopelessness. We have to give them a sense that they can affect this world, or we will lose them to nihilism and despair,” she says. But she also recognises it is “privileged” to be protective. “Many people on this planet don’t have that option because they’re so directly impacted. Think about how many little kids have been forced to migrate because of hurricanes battering their homelands in Central America.”

Activism may be uniquely young today but older people have seen multiple generations of youthful uprisings fail to dent global capitalism. How can the youth change it all? “I’m not arguing that they should do it on their own,” says Klein. “We need a mass, intergenerational movement. Young activists really bridle against this idea that their job is to give hope to older people. The fact that they are sacrificing so much of their childhood doing what they shouldn’t have to do is all the more reason for older generations to do more and take leadership from them.”

The global leader Greta Thunberg inevitably features in How to Change Everything. “I look to her as the North Star in so many ways, because she is just so unimpressed with talk,” says Klein. “Now that Trump is out of office, there’s lots of politicians saying the right thing. I just think of Greta and ‘enough with the blah blah blah’, as she said in Davos. OK, show me the carbon. Or the lack of it.”

There’s a lot of blah blah blah about how the coronavirus pandemic will change everything, too. I pessimistically fear it has swamped the youth climate movement, just as 9/11 drowned out anti-corporate globalisation protests, but Klein is confident the movement will return, “with a lot of force and probably with some surprising new tactics that we haven’t thought of”.

What the pandemic has changed, says Klein, is our understanding of how to respond to an emergency. When youth movements called for climate change to be treated as an emergency, governments responded with fine words but little urgency. “The big difference post-Covid is we now know what it means to treat an emergency like an emergency. We’ve all seen our governments do it. They can change things dramatically overnight. And that’s not something those of us born after the second world war had experienced. Our expectations and our ability to differentiate between just talk and actual change is heightened. And the pressure is going to be even greater on political leaders.”

Patrick Barkham writes for the Guardian on natural history. He is the author of Islander, The Butterfly Isles and Badgerlands.