Hans Küng, Catholic Theologian Critical of the Church, Dies at 93

A prolific writer and a prominent speaker, he promoted dialogue among religions and challenged Vatican doctrine on many fronts, provoking its censure. 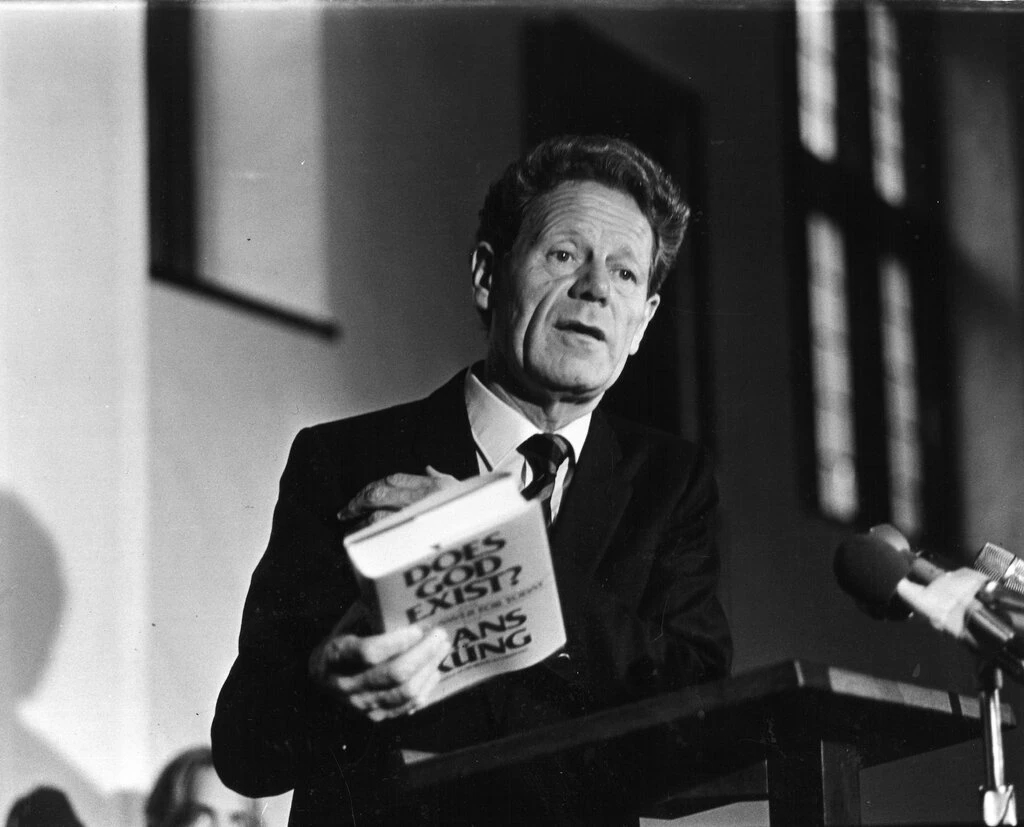 The theologian Hans Küng speaking in New York in 1980, with a copy of one of the more than 50 books he wrote. “Never again would a theologian have such influence,” a Vatican expert wrote after all Dr. Küng’s proposals at the Second Vatican Council were accepted in the council’s final documents.
Neil Boenzi/The New York Times

8 Apr 2021 – Hans Küng, a Roman Catholic theologian and priest whose brilliantly disputatious, lucidly expressed thoughts in more than 50 books and countless speeches advanced ecumenism and provoked the Vatican to censure him, died on Tuesday [6 Apr] at his home in Tübingen, Germany. He was 93.

The death was confirmed by Nadja Dornis, a spokeswoman for the Global Ethic Foundation, which promotes Dr. Küng’s ideas.

Dr. Küng, who as an 11-year-old Swiss boy knew he wanted to be a priest, stood at the center of Christianity’s great upheavals in the latter half of the 20th century. His relentless challenges to the church hierarchy caused his critics to call him the greatest threat to the church since Martin Luther, even the Antichrist.

As a liberal, he criticized church policy on governance, liturgy, papal infallibility, birth control, priestly celibacy, the ordination of women, mixed marriages, homosexuality, abortion, the meaning of hell and much else.

On some issues, Dr. Küng said, Buddhism and Judaism were more constructive than Catholicism. Serving Jesus Christ is what matters, he insisted — not serving the church that took his name.

Many Catholics supported him, or at least admired his effectiveness. Peter Hebblethwaite, a Vatican expert, wrote that all Dr. Küng’s proposals at the Second Vatican Council were accepted, some in modified form, in the council’s final documents.

“Never again would a theologian have such influence,” he wrote. 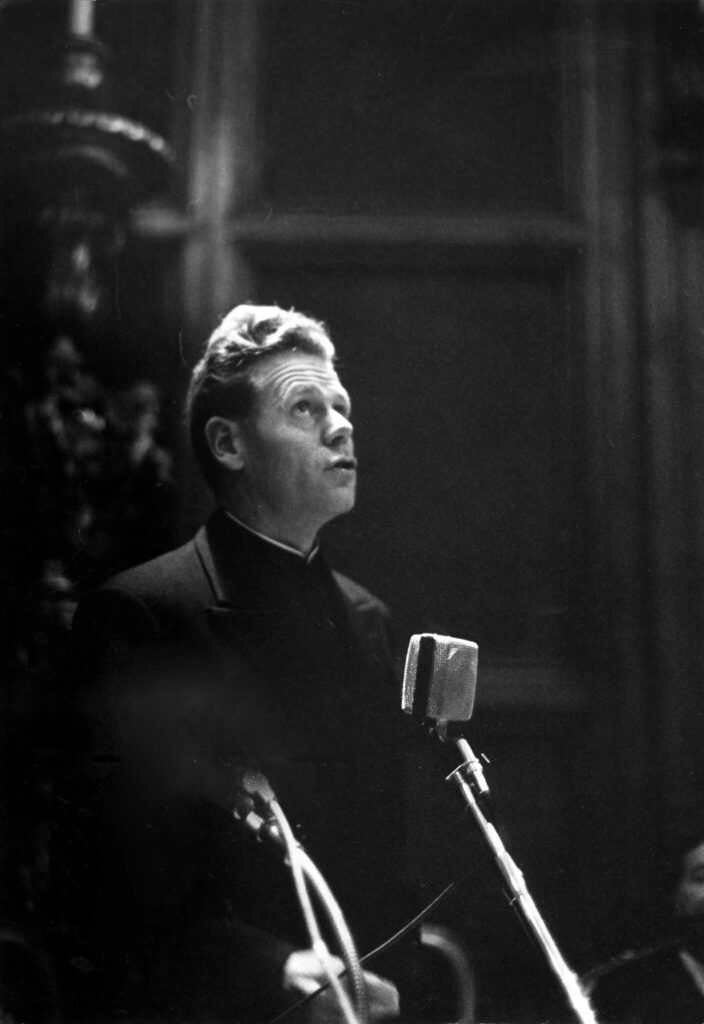 Dr. Küng speaking in 1968. Athletic and handsome, he wore crisp business suits and drove a sports car, and he preferred not to be called “Father.”
Moosbrugger/ullstein bild, via Getty Images

As a rigorous, imaginative scholar, Dr. Küng (pronounced kee-UNG) discovered profound similarities between the essential faith of Catholics and that of Protestants, seeming to remove a significant barrier to a historic rapprochement. In his later years he worked to find commonalities in the ethics of all religions as a means toward peace.

Dr. Küng emerged as a champion of reform in the 1960s at the Second Vatican Council, also known as Vatican II, where he was an official theologian (he was the youngest one there). Pope John XXIII had called the meeting to “let some fresh air into the church.”

Dr. Küng saw the conference as only a beginning. He continued to press for more revisions in church dogma, including ending the ban on birth control and vows of celibacy by priests.

His polarizing effect was evident on a tour of the United States in 1963. The Catholic University of America in Washington forbade him to speak, but he drew thousands of supporters elsewhere. Two years later, Pope Paul VI, John’s successor, responded to the mounting interest in Dr. Küng’s work by inviting him to the Vatican. Paul told Dr. Küng that he would have preferred that he had written nothing, then offered him a Vatican post.

Dr. Küng turned him down. To have taken the position, he wrote later, would have made him a conformist, even though he acknowledged that it might have been “the great opportunity of my life.”

Robert Kaiser, the Time magazine correspondent at Vatican II, wrote in The National Catholic Reporter in 2006, “If he’d played his cards differently, Hans Küng could have been pope.”

But it was unlikely that Dr. Küng could have thought, spoken or acted differently; few could foresee him relenting in his criticisms of the church. In an interview with The New York Times in 1968, he said he saw an equivalence in the Communist and Roman Catholic systems.

“Are not both absolutist, centralist, totalitarian — in short, enemies of freedom?” he asked.

Catholic theologians answered that Christ had entrusted the authentic interpretation of his divine revelation to the church with the apostle Peter, from whom all popes are said to descend. They said that the sort of democratic church Dr. Küng advocated, however meritorious, did not guarantee spiritual truth.

Dr. Küng’s self-confident manner — variously perceived as brilliant, overelaborate or disrespectful — did not always help his cause. One joke had it that he did not want to be pope because then he would not be infallible.

Dr. Küng’s problem, the priest and author Andrew M. Greeley wrote in “The Making of the Popes 1978” (1979) was the envy he aroused among Vatican officials over his popularity and success.

“Other scholars have been re-evaluating the papacy much more quietly — and have said far more radical things than Küng,” Father Greeley wrote.

It was Dr. Küng’s tightly reasoned rejection of the doctrine of papal infallibility in his book “Infallible? An Inquiry” (1970) that led to his dismissal as an official church theologian. He maintained that the doctrine, which was adopted in 1870 and applies only to those extraordinary moments when the pope speaks officially as the vicar of Christ, was not supported by scripture. He gave copious examples of papal mistakes. 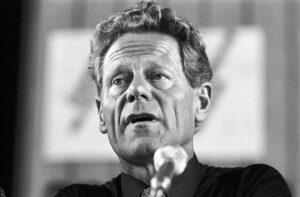 Dr. Küng in 1980. His polarizing effect was evident on a tour of the United States in 1963, when the Catholic University of America in Washington forbade him to speak there but he drew thousands of supporters elsewhere.
Ullstein Bild/ullstein bild, via Getty Images

In 1979, Pope John Paul II, Paul’s successor, approved the removal of Dr. Küng’s theological authority, meaning he could no longer teach with the church’s sanction or hold any office in church government.

But he was never dismissed as a priest, and losing his theological status turned out to mean only that he was moved to a different part of the same German university. He continued to write popular, well-reviewed, densely researched books, and to draw crowds on lecture tours. Some Catholic thinkers suggested that his new, more independent role made him a better bridge to the secular world.

Soon after Cardinal Joseph Ratzinger, a leader in the campaign against Dr. Küng, became Pope Benedict XVI in 2005, he invited Dr. Küng to his summer residence in Castel Gandolfo, outside Rome. Pope John Paul II had denied more than a dozen of Dr. Küng’s requests for a meeting.

Nevertheless, after Cardinal Ratzinger became pope, the two enjoyed a long dinner at the pope’s summer residence after agreeing not to disagree. Pope Benedict applauded Dr. Küng’s efforts to revive the dialogue between faith and the natural sciences. Dr. Küng praised the pope for reaching out to other religions.

But after Benedict resigned the papacy in 2013, Dr. Küng suggested that the pope had been out of step with “modernity” and that the church was in need of more progressive leadership.

“In this dramatic situation the church needs a pope who’s not living intellectually in the Middle Ages, who doesn’t champion any kind of medieval theology, liturgy or church constitution,” he wrote, “a pope who stands up for the freedom of the church in the world not just by giving sermons but by fighting with words and deeds for freedom and human rights within the church, for theologians, for women, for all Catholics who want to speak the truth openly. ”

Dr. Küng’s image was distinctly nonclerical. Athletic and handsome, he wore crisp business suits, not a priest’s collar, and drove a sports car. On his trips to the United States, he sometimes appeared on television talk shows, and his youthful style drew comparisons to President John F. Kennedy.

Dr. Küng preferred to be called “professor” or “doctor” or “just plain Hans Küng,” explaining that the title “Father” was not traditionally used in German-speaking lands.

Hans Küng was born in Sursee, Switzerland, on March 19, 1928, and named after his father, a prosperous shoe merchant. His mother, Emma (Gut) Küng, had been a farmer’s daughter. Hans had five younger sisters.

Dr. Küng wrote in a memoir, “My Struggle for Freedom” (2002), that his decision at 11 to become a priest reflected his admiration for a friend who had chosen that course. He recalled immediately accepting a celibate life and choosing to no longer sit beside his girlfriend (he had kissed her just once) on the train to school.

After graduating from a public high school in Lucerne, he attended the Pontifical German College in Rome for seven years, followed by more studies there at the Pontifical Gregorian University.

In 1955, to receive his licentiate in theology, he submitted a thesis on the thinking of the great Protestant theologian Karl Barth.

He was ordained a priest in 1954 and went on to do graduate work in London, Amsterdam, Berlin, Madrid and Paris. He earned a doctorate in sacred theology in 1957 at the Catholic Institute of the Sorbonne.

In 1964, Dr. Küng published a more elaborate version of the Barth study as well as an English edition, “Justification: The Doctrine of Karl Barth With a Catholic Reflection.”

With a glowing introduction from Barth himself, the book, which seemed to prove that Barth’s notion of Christian grace tallied with the Catholic notion, was a sensation among both Catholic and Protestant scholars. Both views defend the total freedom and gift of God’s grace, which, they assert, no person earns.

Cardinal Ratzinger wrote in one review, “For such a gift Hans Küng deserves the honest thanks of all who pray and work toward the unity of undivided Christianity.” 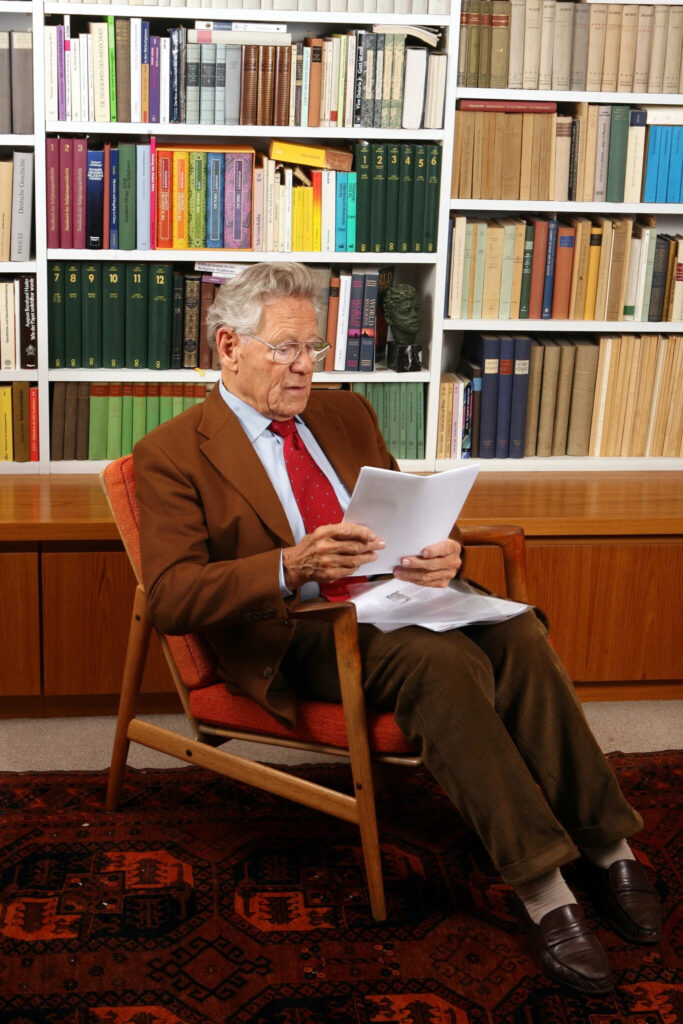 Dr. Küng in 2008. He once called himself “an idealist without illusions.
Bernd Weissbrod/picture-alliance, via Associated Press

After being removed from that faculty in 1979, he stayed on at the university as a theology professor and director of its ecumenical institute. That left him free to suggest letting laymen help elect the pope, as well as instituting a means of firing faltering popes.

Dr. Küng in recent years pushed “a global ethic” that he said all religions could endorse. The Parliament of the World’s Religions in 1993 endorsed his proposals, including a more just economic order and universal adherence to the Golden Rule.

Two years later he founded and led the Global Ethic Foundation, a research and teaching organization associated with the University of Tübingen that aims to promote ethical values worldwide and foster dialogue among religions and cultures.

The foundation said it did not have information about Dr. Küng’s survivors.

Dr. Küng once called himself “an idealist without illusions.” He also once said, “I have not easy optimism, but serious hope.”

Or, Dr. Küng added, he could speak in Latin, “so they could understand every word in Rome.”

Correction: April 7, 2021 – An earlier version of this obituary misstated the middle initial of the priest and author Andrew Greeley, who wrote about Dr. Küng in his book “The Making of the Popes 1978.” It was M, not W.

A version of this article appears in print on April 7, 2021, Section B, Page 10 of the New York edition with the headline: Hans Küng, Catholic Theologian and Relentless Critic of the Church, Dies at 93.