Particle Mystery Deepens, as Physicists Confirm That the Muon Is More Magnetic Than Predicted 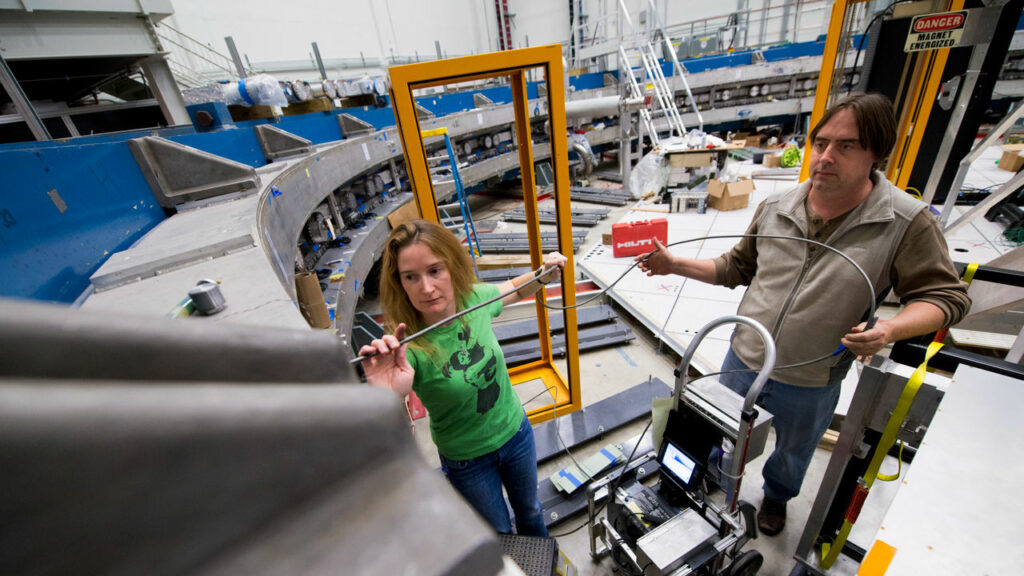 Muons twirl as they circulate in this ring-shaped accelerator at Fermilab, like race cars perpetually spinning out. REIDAR HAHN/FERMILAB

7 Apr 2021 – A potential chink in physicists’ understanding of fundamental particles and forces now looks more real. New measurements confirm a fleeting subatomic particle called the muon may be ever so slightly more magnetic than theory predicts, a team of more than 200 physicists reported this week. That small anomaly—just 2.5 parts in 1 billion—is a welcome threat to particle physicists’ prevailing theory, the standard model, which has long explained pretty much everything they’ve seen at atom smashers and left them pining for something new to puzzle over.

“Since the 1970s we’ve been looking for a crack in the standard model,” says Alexey Petrov, a theorist at Wayne State University. “This may be it.” But Sally Dawson, a theorist at Brookhaven National Laboratory, notes the result is still not definitive. “It does nothing for our understanding of physics other than to say we have to wait a little longer to see if it is real.”

For decades, physicists have measured the magnetism of the muon, a heavier, unstable cousin of the electron, which behaves like a tiny bar magnet. They put muons in a vertical mag­netic field that makes them twirl horizontally like little compass needles. The frequency at which the muons twirl reveals how magnetic they are, which in principle can point to new particles, even ones too massive to be blasted into existence at an atom smasher like Europe’s Large Hadron Collider.

That’s because, thanks to quantum uncertainty, the muon sits amid a haze of other particles and antiparticles flitting in and out of existence. These “virtual” particles can’t be observed directly, but they can affect the muon’s properties. Quantum mechanics and Albert Einstein’s theory of special relativity predict the muon should have a certain basic magnetism. Familiar standard model particles flitting about the muon increase that magnetism by about 0.1%. And unknown particles lurking in the vacuum could add another, unpredictable increment of change.

In 2001, researchers with the Muon g-2 experiment, then at Brookhaven, reported that the muon was a touch more magnetic than the standard model predicts. The discrepancy was only about 2.5 times the combined theoretical and experimental uncertainties. That’s nowhere near physicists’ standard for claiming a discovery: five times the total uncertainty. But it was a tantalizing hint of new particles just beyond their grasp.

So in 2013, researchers hauled the experiment to Fermi National Accelerator Laboratory (Fermilab) in Illinois, where they could get purer beams of muons. By the time the revamped experiment started to take data in 2018, the standard model predictions of the muon’s magnetism had improved and the difference between the experimental results and theory had risen to 3.7 times the total uncertainty.

Now, the g-2 team has released the first result from the revamped experiment, using 1 year’s worth of data. And the new result agrees almost exactly with the old one, the team announced today at a symposium at Fermilab. The concordance shows the old result was neither a statistical fluke nor the product of some undetected flaw in the experiment, says Chris Polly, a Fermilab physicist and co-spokesperson for the g-2 team. “Because I was a graduate student on the Brookhaven experiment, it was certainly an overwhelming sense of relief for me,” he says.

Together, the new and old results widen the disagreement with the standard model prediction to 4.2 times the experimental and theoretical errors. That’s still not quite enough to claim a definite discovery. But in a field in which similar hints of new physics come and go, the magnetism of the muon has remained an almost singular puzzle, says Graham Kribs, a theorist at the University of Oregon. “There’s nothing else that’s really sort of standing out for which the entire community is like, ‘Remember, we also have to deal with this.’”

The entire g-2 team shared a moment of truth when, on 25 February, the experimenters first revealed the new result to themselves. The experiment involves measuring the rate at which the muons twirl to exquisite precision. And to keep themselves from subconsciously steering the measurement to a value they’d prefer, experimenters relied on a clock ticking at a secret frequency known to only two people, both outside the collaboration. Only at the very end of the analysis did they open the envelopes containing the secret frequency—on a Zoom meeting because of COVID-19 restrictions. “Definitely there was this atmosphere of extreme tension,” says Hannah Binney, a graduate student and team member from the University of Washington, Seattle. Within seconds, she says, researchers used the secret frequency to figure out that the new result matched the old one.

The immediate responses to the new result will likely be twofold, Petrov says. First, with the experimental value confirmed, physicists will likely question the theoretical estimate anew. Starting in 2017, more than 130 theorists met in a series of workshops to hammer out a consensus value for the standard model prediction, which they published in November 2020. But Petrov says the calculation is a complicated “hodgepodge” that employs a variety of methods—including extrapolating from collider results—to account for different types of standard model particles flitting in and out of the vacuum. Theorists will now redouble their efforts to validate the consensus value and to develop computational methods that would enable them to calculate it from first principles, Petrov says.

And, of course, others will begin to concoct new theories that would go beyond the standard model and explain the muon’s extra magnetism. “This is going to be a field day for theorists,” Petrov predicts. Their musings may be a tad premature, as g-2 experimenters are still taking data and hope to reduce the experimental uncertainty by 75% within a few years. So the discrepancy could still fade. But, on the chance that the muon is really signaling the presence of something new, many theorists will be eager to start.