Ramsey Clark, Attorney General Who Became a Critic of U.S. Policies, Dies at 93

10 Apr 2021 – Ramsey Clark, who was U.S. attorney general under President Lyndon B. Johnson and then, after leaving government service, redefined himself as a relentless critic of American foreign policy and as a courtroom defender of widely reviled figures such as former Iraqi president Saddam Hussein, died April 9 at his home in New York City. He was 93. 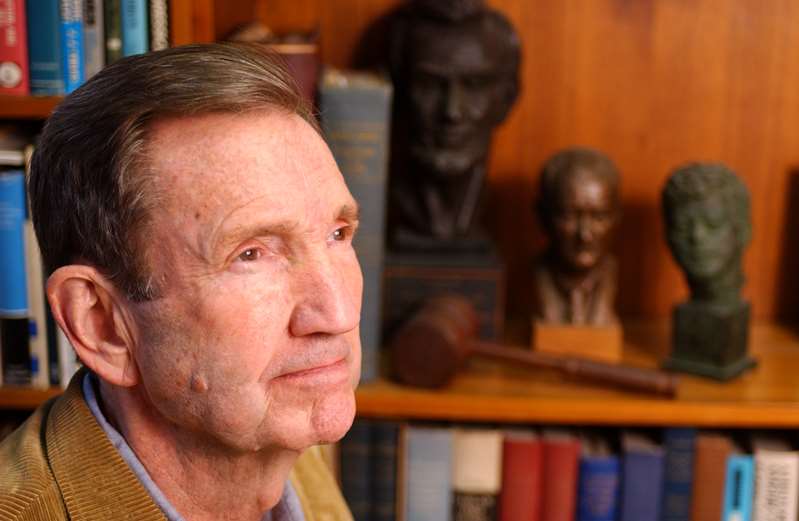 The death was confirmed by a great-niece, Sharon Welch. The precise cause was not immediately known.

The son of conservative Supreme Court Justice Tom C. Clark, Mr. Clark grew up in the lap of the political establishment and was the last surviving member of Johnson’s Cabinet. As a young man, he showed few signs of his firebrand future, but in the half-century that followed his 22-month term as the nation’s top prosecutor, he underwent a remarkable political transformation and became a persistent voice of dissent against the government.

As attorney general, Mr. Clark had prosecuted pediatrician and best-selling author Benjamin Spock for conspiracy to aid draft resisters during the Vietnam War. Within three years of leaving office, Mr. Clark had flown to Hanoi to denounce U.S. aggression and went to court to defend Philip Berrigan and other leading antiwar activists.

For a time, Mr. Clark was a darling of the left — a blunt and outspoken former Cabinet member who publicly raised questions about the morality of American interventions abroad. He attacked what he called the United States’ “sham” democracy, ruled not by the people but by the wealthy few, and he decried the nation’s “genocidal” foreign policy and “certifiably insane” military spending.

Still, Mr. Clark continued to serve occasionally in official capacities for the government. In 1979, at the request of President Jimmy Carter, he tried to negotiate the release of 53 Americans taken hostage in Tehran after the fall of the U.S.-backed shah in Iran. When he was denied entry into Iran, Mr. Clark flew home.

Then he returned to Tehran months later to take part in a “Crimes in America” conference that adopted a resolution condemning U.S. actions in Iran. Mr. Clark called the seizure of hostages — who were, at the time, more than 200 days into their incarceration — “understandable” but wrong. He urged the United States to apologize for its wrongdoings in Iran. Carter threatened to prosecute the former attorney general for violating the U.S. ban on travel to Iran.

“If you really love your country, you work very hard to make it right,” Mr. Clark later told the Los Angeles Times. “Anything else is an extreme act of disloyalty and an extreme failure of courage.”

Mr. Clark later sued the U.S. government for bombing Libya in 1986 in response to a terrorist attack on a Berlin disco. He traveled to Panama after the 1989 American invasion to document what he said was the U.S. military’s coverup of a “physical assault of stunning violence,” and he voiced opposition to U.S. war efforts against Iraq in 1990 and 2003.

Conservatives came to loathe Mr. Clark, but support for him also began to erode among left-leaning activists as he made a habit of defending a rogues’ gallery of accused terrorists and war criminals.

“I wish he didn’t do some of these things,” Leslie Cagan, a peace activist, said of Mr. Clark in a 2005 interview with the New York Observer. “He is one of the few public well-known leftists in this country, and it does make our work harder sometimes.”

His client list included political extremist Lyndon LaRouche; several followers of the Branch Davidian cult leader David Koresh; former Black Panther Mumia Abu-Jamal, who was on death row for killing a Philadelphia police officer; and Lori Berenson, an American who was imprisoned in Peru for aiding a Marxist revolutionary group.

Mr. Clark also defended Slobodan Milosevic, the former president of former Serbia and Yugoslavia, who died while being tried for genocide by a United Nations tribunal at The Hague; Elizaphan Ntakirutimana, a Rwandan pastor who was found guilty of engineering a massacre of ethnic Tutsis inside his church; and Karl Linnas, an elderly former commander of a Nazi concentration camp.

“You don’t go after septuagenarians 40 years after some god-awful crime they’re alleged to have committed,” Mr. Clark once said, speaking of Linnas. “If you do, then what it really means is, if we find you, we’ll kill you, so act accordingly. It means that we’re going to be condemned to eternal conflict, which is my great concern. We’ve got to find a way to end wars.”

His most notorious client was Hussein, who was accused not only of orchestrating the genocide of hundreds of thousands of Iraqi Kurds, but also of ordering the murder of 148 boys and men after his motorcade was fired on in 1982 near the Shiite town of Dujail.

“He had this huge war going on,” Mr. Clark told the BBC in Hussein’s defense, “and you have to act firmly when you have an assassination attempt.”

Mr. Clark called his legal work an extension of his 1960s Justice Department efforts to defend civil rights. “People are guaranteed fairness under the constitution,” he told the Dallas Morning News in 1996. “And the constitution doesn’t say you only get fair treatment under certain conditions.”

Those who knew Mr. Clark regarded him with a mix of bafflement, admiration and frustration. He raised serious questions about ensuring fair trials for society’s most untouchable criminals. But he also displayed inconsistencies that troubled his fellow pacifists and onetime allies — denouncing genocide, for example, while at the same time excusing Hussein.

“He lost the opportunity to be a really effective, influential voice on the American left, such as it is, and that was a great loss,” Mr. Clark’s onetime law partner, Melvin L. Wulf, told the New York Times in 1991. “He was and is a total enigma to me, and I don’t think anyone worked with him as closely as I.”

‘The sense of a need to help’

William Ramsey Clark was born Dec. 18, 1927, in Dallas. He spent his early years in Dallas and Los Angeles before attending Washington’s Woodrow Wilson High School. He then joined the Marine Corps and served as a courier in Europe.

He graduated from the University of Texas in 1949. That same year, he married a fellow student, Georgia Welch.

They had a daughter born with multiple disabilities, Ronda, whom Mr. Clark credited with giving him “enormous empathy for the poor, the deprived and the handicapped, the sense of a need to help.”

“She’s taught us how ignorant we all are really,” he said in a 1990 interview with the Los Angeles Times. “We think we know a lot in comparison to her, and then we look around at Beirut, at nuclearism, and 8 million infants who starved last year. Eight million.”

Mr. Clark received a combined law degree and master’s degree in history from the University of Chicago in December 1950 and spent the subsequent decade working for his family’s Dallas law firm. He joined Robert F. Kennedy’s Justice Department in 1961, following his father — who had served as attorney general, under Truman — into public service.

As an assistant attorney general in the Public Lands Division (now the Environment and Natural Resources Division), Mr. Clark built a reputation as an efficient administrator. He also had important roles in the Justice Department’s civil rights battles, including in the aftermath of riots that broke out when James Meredith, a Black student, enrolled at the University of Mississippi in 1962. He helped draft major civil rights legislation, including the Voting Rights Act of 1965 and the Fair Housing Act of 1968.

Mr. Clark was appointed to the top Justice Department position in 1967 by Johnson, a fellow Texan and old family friend. Mr. Clark’s father resigned from the Supreme Court to avoid the appearance of a conflict of interest — a move that allowed Johnson to burnish his civil rights credentials by filling the vacancy with the high court’s first African American justice, Thurgood Marshall.

Departing from his father’s politics, Mr. Clark carved an identity as one of the Cabinet’s most left-leaning members. Known in the Justice Department as “the preacher” for his stubborn adherence to principle, he was perceived by critics as soft on crime.

He implemented an unofficial moratorium on capital punishment and asked Congress to outlaw it for good. He also aggressively restricted federal wiretapping operations and repeatedly refused to authorize FBI wiretaps on the Rev. Martin Luther King Jr.

After leaving the presidency in 1969, Johnson derided his attorney general’s tendency to “go around preachin’ bleeding-heart stuff” and called the appointment of Mr. Clark his “biggest mistake.”

“I thought I had appointed Tom Clark’s son,” Johnson once said. “I was wrong.”

After leaving government service in 1969, Mr. Clark joined a prestigious Wall Street law firm. He departed soon afterward, saying he was frustrated by his inability to revolutionize the policies of American corporations from within.

He wrote the best-selling 1970 book “Crime in America” about the root causes of crime and the failures of the correctional system, and later that decade mounted two unsuccessful campaigns for the U.S. Senate from New York. In the 1974 race against Republican incumbent Jacob Javits, Mr. Clark limited his campaign contributions to $100 each and proposed cutting the defense budget by half.

“I went upstate and told hunters I thought we should abolish handguns and license long guns,” he said. He told Long Island voters that he wanted to close one of the area’s biggest employers, a manufacturer of military planes.

Surprising observers, he mounted a respectable challenge, losing to Javits by only six percentage points.

“Thank God, I didn’t win,” Mr. Clark later said. “Frankly, I would have been bored.”