Russia’s Ukraine Maneuvers Are a Response, Not a Provocation

The Ukrainian government’s push for NATO membership could provoke a dangerous escalation of the Ukrainian conflict. 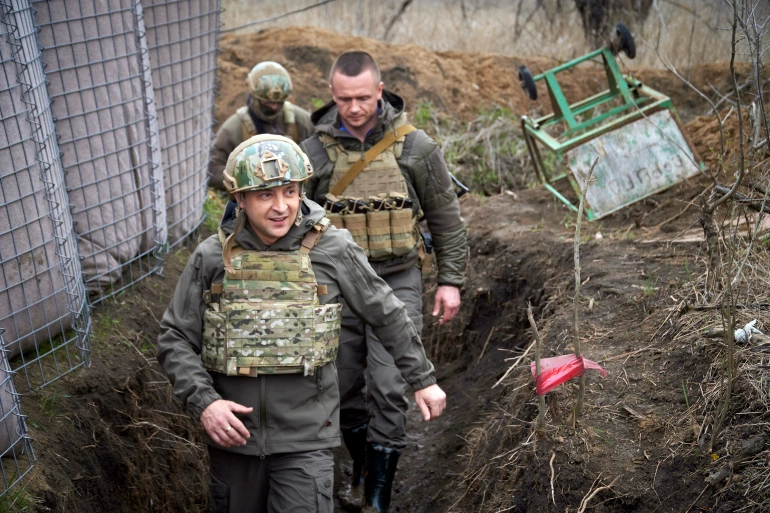 13 Apr 2021 – Over the past few weeks, Russia has been amassing troops at the Ukrainian border, triggering alarm in Kyiv and European Union capitals. Kremlin-controlled TV channels have been busy preparing the public in Russia for a fresh outbreak of war. Alarmingly jingoistic statements are being made on various talk shows, with hosts and guests suggesting the possibility of Russia seizing new chunks of Ukrainian territory or even advancing as far as Kyiv.

Western observers have been speculating that Russian President Vladimir Putin is trying to test US President Joe Biden’s resolve or that he wants to distract public attention in Russia from the plight of the first poisoned, then imprisoned opposition leader Aleksey Navalny. It is also not inconceivable that he might be entertaining the idea of replicating the “Crimea effect” by waging “a small victorious war” on the eve of parliamentary elections in September. In 2014, the annexation of Crimea resulted in a huge surge in his personal popularity.

But given Putin’s propensity to stealthy and surprising moves, the current deployment of troops is way too demonstrative to be a preparation of imminent invasion. Their enhanced visibility has made some observers conclude that they are meant as intimidation rather than outright aggression.

From the Russian perspective, however, the Kremlin is being reactive, not proactive, in the face of a newly emerging threat. The amassing of troops is the Kremlin’s heavy-handed response to what it interprets as a coordinated attempt by Biden and Ukrainian President Volodymyr Zelenskyy to upset the fragile equilibrium which underpinned a relative calm on the front line in eastern Ukraine.

A landmark event, which preceded this escalation, was the war in Nagorno-Karabakh last fall, in which Russia’s military ally, Armenia, was soundly defeated by Azerbaijan with the assistance of Turkey, a NATO member. That war demonstrated the limits of Russia’s ability and willingness to get dragged into another serious conflict. It also highlighted the vulnerabilities of an army overly reliant on Russian weapon supplies, particularly against Turkish drones.

The Atlantic Council, a hawkish NATO-linked think tank, which to a large extent drives the Ukrainian discourse in Washington, was quick to suggest that the war in Nagorno-Karabakh opened a possibility of a military solution in Donbas, while peace talks were a road to nowhere. Incidentally, both Karabakh and Ukraine talks take place at the same venue – Minsk, Belarus.

The Minsk agreements were imposed on Ukraine after it suffered a series of defeats in the war against Russia-backed Donbas separatists in 2015. If implemented in full, they essentially ensure that Russia retains a stake in Ukrainian politics, allowing it to block the country’s membership in NATO – Moscow’s main concern that drives its Ukraine policy. Kyiv has long tried to amend the agreements while threatening to leave the Minsk framework altogether, but Moscow would not budge.

The arrival of Biden’s administration coincided with Zelenskyy adopting a new assertive policy on Russia, which could not help but alarm the Kremlin.

First, his government closed TV channels associated with Viktor Medvedchuk, an oligarch seen as Putin’s man in Ukraine. The move primarily served to undermine Medvedchuk’s Opposition Platform/For Life party. This Russia-friendly force emerged as Ukraine’s most popular party at the end of 2020, not least because of Zelensky’s failure to bring peace and repeal the ethnonationalist legislation restricting the use of the Russian language, a ticking time bomb set up by his predecessor, Petro Poroshenko, in the last days of his presidency.

Meanwhile, Ukraine renewed its efforts to attain NATO membership. Three days after Biden entered the White House, Zelenskyy gave an interview to US media outlet Axios, in which he made clear Ukraine’s readiness to join the transatlantic alliance under this US administration. The interview was followed by foreign minister Dmytro Kuleba publishing an op-ed on the Atlantic Council’s website titled: Why is Ukraine still not in NATO?, which called for launching a membership plan for Ukraine.

On March 5, the same think-tank presented a list of recommendations to the Biden administration, which included granting Ukraine the status of a “major non-NATO ally” and threatening Russia with activating a NATO membership plan for Ukraine, if Moscow fails to be more cooperative on Donbas.

In the meantime, the ceasefire in eastern Ukraine – Zelenskyy’s main achievement on the peace settlement front – essentially collapsed. At the end of March, Putin spoke to French and German leaders, the co-sponsors of the Minsk peace talks, to communicate his concern about the aggravating situation. Ukraine was demonstratively excluded from the conversation. Soon after, Russia began amassing troops at the Ukrainian border.

In sharp contrast with his habitually dovish approach, Zelenskyy is not backing off. On April 6, he told NATO Secretary-General Jens Stoltenberg that NATO was “the only way to end the war in Donbas” and that the membership action plan would be “a real signal for Russia”. A real signal indeed: A few hours later, Russian defence minister Sergey Shoygu ordered a combat readiness check for the whole Russian army.

Ukraine’s NATO membership is a clear red line not just for the Kremlin, but for Russian society as a whole. It would place hostile troops just 500km (310 miles) south of Moscow, in addition to them already being stationed 600km (373 miles) to the west of the Russian capital, in Baltic countries. This would not only elicit a hostile response from the Kremlin, but it would also solidify Putin’s regime for years to come and marginalise the currently fledgeling anti-Putin opposition.

Putin is known for skillfully exploiting the unhealed trauma of World War II to mobilise support, including from people who do not like his other policies. America’s disregard for that trauma and its never-ending flirtation with radical nationalism in Eastern Europe makes it all too easy for the Kremlin to sell NATO to Russians as an existential threat. Examples of that tone-deafness are all too many. At a policy conference earlier this month, the former commander of US armed forces in Europe, Ben Hodges, made a wild claim that “it were Ukrainians, not Russians” who perished in World War II. At the same conference, a Ukrainian politician promoted the idea of Idel-Ural, a separatist project for Russia’s Volga region Hitler toyed with during the war.

Diplomats representing all parties involved are surely working hard to prevent the worst, but all of this does not bode well for millions of eastern Ukrainians trapped between Putin’s dictatorship and the American-backed ethnonationalist project for Ukraine – as promoted by Atlantic Council pundits – which defies the social and cultural reality in the post-Soviet region.

A renewed conflict will inevitably lead to renewed polarisation in Ukraine. A unifying figure who transcends the country’s east-west linguistic divide, Zelenskyy might be Ukraine’s last chance to save itself from partition and the West’s last chance to preserve Ukraine as a potential role model serving to inspire pro-democracy Russians. No one, except war-mongering hawks in Moscow, Washington and Kyiv, would gain from another blood bath in Ukraine.

Leonid Ragozin is a freelance journalist based in Riga.