The Kafkaesque Nightmare of Attorney Steven Donziger, a Literal Prisoner of the Chevron Corporation

When human rights lawyer Steven Donziger won a multibillion-dollar lawsuit against the oil giant Chevron, the company retaliated by setting out to destroy Donziger’s life. Now in his twentieth month of house arrest on the orders of a Chevron-linked judge, his Kafkaesque story is a window into the corrupt and corporate-captured US legal system. 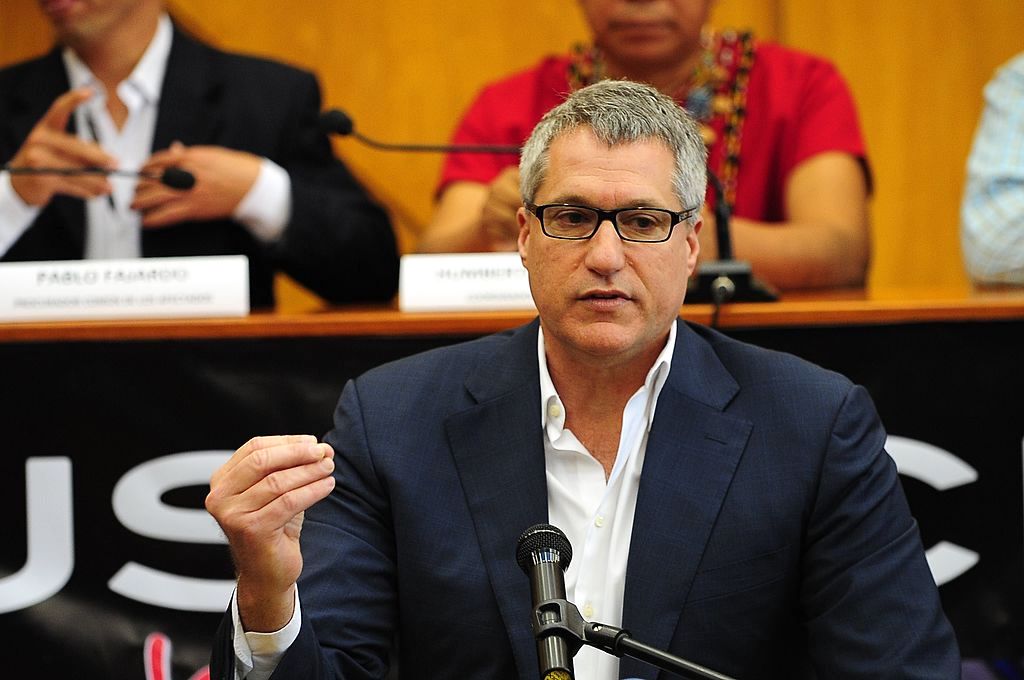 15 Apr 2021 – Human rights lawyer Steven Donziger can rightly be called America’s first corporate political prisoner. Currently living through his twentieth month under house arrest, Donziger was part of a legal team that in 2011 won a historic, multibillion dollar lawsuit against oil giant Chevron over its activities in the Ecuadorian Amazon.

Donziger, however, was afforded little time to savor this victory — soon finding himself on the receiving end of an unprecedented smear campaign and legal offensive undertaken by the company, which has ultimately seen him languish in house arrest in his New York City home for over six hundred days without a trial. This state of affairs comes after an extremely dubious ruling by a judge with tobacco-industry ties who has repeatedly praised Chevron.Donziger’s case has attracted support from around the world, with some fifty-five Nobel Laureates, hundreds of attorneys and legal organizations, and celebrities including Sting, Danny Glover, and Roger Waters condemning the corporate campaign against him. On May 10, he’ll be facing a misdemeanor contempt charge in a New York City court, the trial overseen by a judge who belongs to the Federalist Society — a right-wing group that quite literally counts Chevron among its donors.Jacobin spoke with Donziger about his work exposing Chevron’s crimes against the people of Ecuador, his case, and the dangerous precedent it sets in allowing corporations to persecute, and prosecute, their critics.

LS: All of this began because you were part of a legal team that took action — successfully, I might add — against Chevron over its activities in Ecuador. Can you tell us about that lawsuit?

SD: I got involved in the case in April of 1993 when I was invited to join a delegation of lawyers and scientists to investigate what we had been told was maybe the world’s worst oil-related catastrophe in an area of the Ecuadorian Amazon — just south of the Columbia border.

So we went there and I discovered what was really an apocalyptic scene: huge, Olympic-size pools of oil that had been left in the jungle; hundreds and hundreds of these open air, toxic waste pits that Chevron had built to dispose of waste. They would put pipes into the sides of these pits so they could easily run the cancer-causing contents into nearby rivers and streams that the local indigenous peoples and other rural farming communities relied on for their drinking water and for bathing and fishing.

It was very clear that this was deliberately designed to lower production costs by polluting. So the catastrophe that we witnessed was really disturbing on a number of levels, but I think the thing that maybe most disturbed me was that it was designed to do this. It wasn’t an accident. Over time, experts began to call this the Amazon Chernobyl, and I think that by any objective metric it’s probably the worst oil-related contamination on earth. Chevron owns it. They’re refusing to take responsibility for it, and they’re refusing to pay the people they harmed compensation for the damage, even though that has been ordered by multiple courts.

So I got involved in 1993 and then became part of a team that pursued a legal case which culminated in a successful outcome for the people of Ecuador in 2011, when the Ecuadorian court ruled that Chevron was liable and owed $9.5 billion US dollars to the affected communities for cleanup. They have not paid a dollar and have since been pursuing an attack strategy against me and other lawyers, designed to help them evade complying with the law.

Rather than pay the judgment of the Ecuadorian court, which has been affirmed on appeal by multiple appellate courts, including the Supreme courts of Ecuador and Canada, Chevron has just flat out refused to comply with the law. Chevron executives have told the indigenous peoples of Ecuador that, and they’ve threatened them with what they call a lifetime of litigation unless they drop the case. They have threatened me with a demonization strategy in various lawsuits that have crippled me financially and have led to the removal of my law license without a hearing based on false evidence put forth by a paid Chevron witness.

So, ultimately, in my view, there’s a scheme led by Chevron and its law firm, Gibson, Dunn & Crutcher, supported by Judge Kaplan to weaponize the law in the United States to undermine the judgment of the Ecuadorian court that held Chevron liable. And they’re doing that by trying to destroy and target me, and try to criminalize my work. They’re doing that through the US justice system in a way that I believe is an egregious violation of human rights and basic decency.

Judge Kaplan charged me with criminal contempt and had me locked up in my home where I’ve been now for over six hundred days without trial on a misdemeanor case — where the maximum sentence ever imposed is ninety days of home confinement.

It’s very important that people understand that these attacks on me are based, almost completely, on false evidence that Chevron put forth in the US court through Alberto Guerra — who’s a man that Chevron has paid $2 million to in cash and benefits — to testify against me with no corroborating evidence that I bribed the trial judge. That didn’t happen.

Guerra later admitted to lying repeatedly in Judge Kaplan’s court. He admits he’s corrupt. He admits he’s been paid massive sums of money by Chevron in a way that violates the ethical rules of the legal profession. Yet Judge Kaplan, who’s a former tobacco industry lawyer, has credited his testimony and leveraged it against me to lock me up without a jury trial on the theory that I have violated court orders that Chevron designed to cripple my advocacy.

One of them is that I turn over my computer and cell phone to Chevron, and I’ve appealed that. And while that was on appeal, Judge Kaplan charged me with criminal contempt and had me locked up in my home where I’ve been now for over six hundred days without trial on a misdemeanor case — where the maximum sentence ever imposed is ninety days of home confinement.

LS: You’ve been under house arrest for nearly twenty months and are set to go to trial for a misdemeanor contempt charge on May 10. As I understand it, the judge in that case has just announced she’ll be shutting down Zoom access — meaning people won’t be able to see what’s taking place. Where do things stand right now?

SD: This is a trial in name only. It’s actually an exercise by Chevron and Judge Kaplan to weaponize the law and try to criminalize me without a jury and without a neutral fact finder. So this is not a real trial to us. It’s more of an attempt by Kaplan at farce. Think about it: I’m being charged by a judge, not by a prosecutor; the prosecutor’s office refused to take the case; Kaplan appointed a private Chevron law firm — Seward & Kissel — to prosecute me in the name of the people, and my judge is a major member of the Federalist Society, which is a pro-corporate group to which Chevron itself is a major donor.

So my prosecutor has financial links to Chevron, my judge has financial links to Chevron, the charging judge, Judge Kaplan has investments in Chevron, and they’re denying me jury. So my fact finder is a judge who already locked me up for almost two years on a misdemeanor without hearing any of the evidence. She has totally prejudged the case. So the technical result of the trial on May 10 is pretty much preordained. And, if this trial happens, Judge Preska will convict me and then I’ll have an appeal, but it’s not going to trial as people understand it. There’s no real fact finder.

LS: What can people concerned about your case and the extremely dangerous precedent it sets do to help you ahead of May 10 and beyond?

SD: This is how people can help: you need to bear witness. So go to our website, FreeDonziger.org and sign up. If you’re in New York or can get to New York, try to come to the trial in person. If you can’t, we’re going to continue a pressure campaign to convince the court or have the appellate court order the trial judge to open the trial up at least to audio so that people can bear witness.

It’s basically Judge Kaplan who’s my judge, jury, and prosecutor. That’s never happened before, and it’s very dangerous and violates the rule of law. No country does it that way.

There’s a huge amount of interest around the world in attending the trial but because of COVID people can’t travel, and the courthouse is really restricted right now. They won’t open more than maybe 20-25 percent of the capacity of a courtroom to have people attend. So Judge Preska, in my mind, is using COVID to limit public scrutiny of this very embarrassing situation.

LS: You also have a petition to the Department of Justice.

SD: There are several human rights groups and lawyers who are asking the US Department of Justice (that is, the Biden administration) to basically take the case out of the hands of the private Chevron law firm, because it’s illegal to be prosecuted by a private law firm that has a conflict of interest being run by the judge who charged you. It’s basically Judge Kaplan who’s my judge, jury, and prosecutor. That’s never happened before, and it’s very dangerous and violates the rule of law. No country does it that way.

People can also help by making a donation to the legal defense firm, which is being kept in trust by a law firm in Seattle. We’ve had a lot of support, a lot of small donations, so people can give a dollar, $5, $10, $50, $100, or whatever you can. Please help us because it does take resources to deal with this: a monster fossil fuel company that is attacking me and stopping at nothing to do it. They’re using sixty law firms and two thousand lawyers.

Steven Donziger is an American attorney known for his legal battle with Chevron over the company’s pollution in the Lago Agrio oil field in Ecuador.

Luke Savage is a staff writer at Jacobin.