Fact-checkers are great, but the media business keeps trying to solve its credibility problem by misrepresenting what they do. 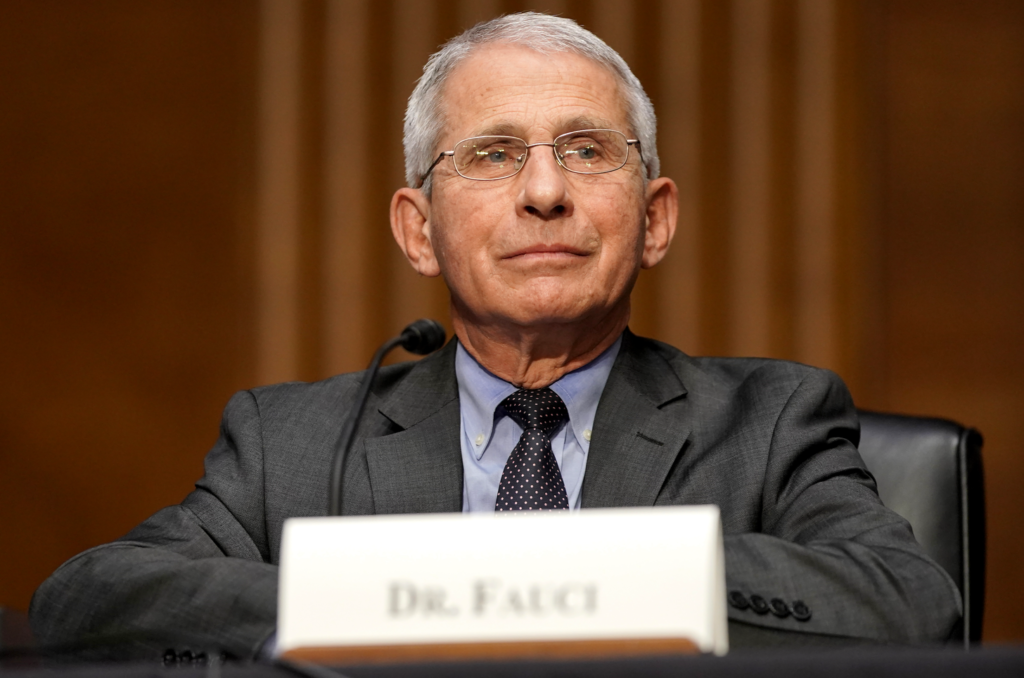 The soul of rectitude testifies in the Senate

25 May 2021 – The news business just can’t stop clowning itself. The latest indignity is an international fact-checking debacle originating, of all places, at a “festival of fact-checking.”

The Poynter Institute is perhaps the most respected think tank in our business, an organization seeking to “fortify journalism’s role in a free society,” among other things through its sponsorship of the fact-checking outlet PolitiFact. A few weeks back, it held a virtual convention called the “United Facts of America: A Festival of Fact-Checking.”

The three-day event featured special guests Christiane Amanpour, Dr. Anthony Fauci, Brian Stelter, and Senator Mark Warner — a lineup of fact “stars” whose ironic energy recalled the USO’s telethon-execution of Terrance and Phillip before the invasion of Canada in South Park: Bigger, Longer, and Uncut. Tickets were $50, but if you wanted a “private virtual happy hour” with Stelter, you needed to pay $100 for the “VIP Experience.”

During the confab, PolitiFact’s Katie Sanders asked Fauci, “Are you still confident that [Covid-19] developed naturally?” To which the convivial doctor answered, “No, I’m not convinced of that,” going on to say “we” should continue to investigate all hypotheses about how the pandemic began:

Conservatives in particular were quick to point out that Fauci last year said, “Everything about the stepwise evolution over time strongly indicates that [this virus] evolved in nature and then jumped species.” At that time last May, of course, the issue of the pandemic’s origin had already long since been politicized, with Donald Trump’s administration anxious to point a finger at China for causing the disaster. Mike Pompeo went so far as to say there was “enormous evidence” the disease had been created at the Wuhan Institute of Virology. Fauci was touted as a hero for pushing back on this and many other things.

Fauci’s new quote about not being “convinced” that Covid-19 has natural origins, however, is part of what’s becoming a rather ostentatious change of heart within officialdom about the viability of the so-called “lab origin” hypothesis. Through 2020, officials and mainstream press shut down most every discussion on that score. Reporters were heavily influenced by a group letter signed by 27 eminent virologists in the Lancet last February in which the authors said they “strongly condemn conspiracy theories suggesting that COVID-19 does not have a natural origin,” and also by a Nature Medicine letter last March saying, “Our analyses clearly show that SARS-CoV-2 is not a laboratory construct.”

The consensus was so strong that some well-known voices saw social media accounts suspended or closed for speculating about Covid-19 having a “lab origin.” One of those was University of Hong Kong virologist Dr. Li-Meng Yan, who went on Tucker Carlson’s show last September 15th to say “[Covid-19] is a man-made virus created in the lab.” After that appearance, PolitiFact — Poynter’s PolitiFact — gave the statement its dreaded “Pants on Fire” rating.

About a half-year later, in February, 2021, the WHO made a visit to China. Apparently some of the delegation left with a few doubts about the natural origin of the virus, even though the WHO’s report declared a lab-origin theory “extremely unlikely.” From there came a procession of scientists demanding that the lab origin possibility be taken seriously, including a letter signed by 18 experts in Science. When the Wall Street Journal came out with a story that a previously undisclosed U.S. intelligence report detailed how three Wuhan researchers became sick enough to be hospitalized in November of 2019, the toothpaste was fully out of the tube: there was no longer any way to say the “lab origin” hypothesis was too silly to be reported upon.

That’s not to say the “lab origin” theory is correct, at all. However, that’s irrelevant to issue at hand. Despite what you might have been led to believe, fact-checkers don’t exist to get things right 100% of the time. They’re there as a threadbare, last-ditch safety mechanism, which news organizations employ as a means of preventing public face-plants.

In any case, by May 17, just days after its “Festival of Fact-Checking,” Poynter/PolitiFact had to issue a correction to its September, 2020 “Pants on Fire” ruling on the “lab origin” story, writing:

When this fact-check was first published in September 2020, PolitiFact’s sources included researchers who asserted the SARS-CoV-2 virus could not have been manipulated. That assertion is now more widely disputed. For that reason, we are removing this fact-check from our database pending a more thorough review.

Fact-checkers probably saved my career on at least a dozen occasions. When I was just starting to report on Wall Street, Rolling Stone often had to assign multiple people to to go through every line of my articles to make sure I didn’t make a complete ass of myself. I joked once that an RS fact-checker nearly flunked the infamous line about Goldman, Sachs being “a great vampire squid wrapped around the face of humanity, relentlessly jamming its blood-funnel into anything that smells like money” by correctly pointing out that squids don’t have blood-funnels. That happened, but the bulk of the work those poor checkers did for me was a lot less humorous and more thankless. The person who had to review my pathetic explanation of a Structured Investment Vehicle (SIV) in this article probably deserved hardship pay and a lifetime supply of Thorazine. Like all writers I complain about fact-checkers, but I’d be the last one to say their jobs aren’t important.

However, the public is regularly misinformed about what fact-checkers do. In most settings — especially at daily newspapers — fact-checking, if used at all, is the equivalent of the bare-minimum collision insurance your average penny-pinching car renter buys. There’s usually just enough time to flag a few potential dangers for litigation and/or major, obvious mistakes about things like dates, spellings of names, wording of quotes, whether a certain event a reporter describes even happened, etc.

For anything more involved than that, which is most things, fact-checkers have to scramble to make tough judgment calls. The best ones tend to vote for killing anything that might blow up in the face of the organization later on. Good checkers are there to help perpetuate the illusion of competence. They’re professional ass-coverers, whose job is to keep it from being obvious that Wolf Blitzer or Matt Taibbi or whoever else you’re following on the critical story of the day only just learned the term hanging chad or spike protein or herd immunity. In my experience they’re usually pretty great at it, but their jobs are less about determining fact than about preventing the vast seas of ignorance underlying most professional news operations from seeping into public view.

Unfortunately, over the course of the last five years in particular, as the commercial media has experienced a precipitous drop in the public trust levels, many organizations have chosen to trumpet fact-checking programs as a way of advertising a dedication to “truth.” Fact-checking has furthermore become part of the “moral clarity” argument, which claims a phony objectivity standard once forced news companies to always include gestures to a perpetually wrong other side, making “truth” a casualty to false “fairness.”

Here’s how Amanpour put it at the Poynter Festival:

[Objectivity] is not about taking any issue, whether it be about genocide, or the climate, or U.S. elections, or anything else happening around the globe — Covid, for instance — and saying, ‘Well, on the one hand, and on the other hand,’ and pretending there is an equal amount of fact and truth in each basket…

Amanpour went on to note her career took off reporting in Bosnia, where one side was being “aggressed” and another side was not, and it would have been an offense against decency to say otherwise. This is a nod to the “objectivity doesn’t mean giving equal time to Republicans” bit that has become so popular in the industry of late (Fox institutionalized the same argument in reverse three decades ago).

But objectivity was never about giving equal time and weight to “both sides.” It’s just an admission that the news business is a high-speed operation whose top decision-makers are working from a knowledge level of near-zero about most things, at best just making an honest effort at hitting the moving target of truth.

Like fact-checking itself, the “on the one hand and on the other hand” format is just a defense mechanism. These people say X, these people say Y, and because the jabbering mannequins we have reading off our teleprompters actually know jack, we’ll let the passage of time sort out the difficult bits.

The public used to appreciate the humility of that approach, but what they get from us more often now are sanctimonious speeches about how reporters are intrepid seekers of truth who sit next to God and gobble amphetamines so they can stay awake all night defending democracy from “misinformation.” But once you get past names, dates, and whether the sky that day was blue or cloudy, the worst kind of misinformation in journalism is to be too sure about anything. That’s especially when dealing with complex technical issues, and even more especially when official sources seem invested in eliminating discussion of alternative scenarios of those issues.

From the start, the press mostly mishandled Covid-19 reporting. Part of this was because nearly all of the critical issues — mask use, lockdowns, viability of vaccine programs, and so on — were marketed by news companies as culture-war narratives. A related problem had to do with news companies using the misguided notion that the news is an exact science to promote the worse misconception that science is an exact science. This led to absurd spectacles like news agencies trying to cover up or denounce as falsehood the natural reality that officials had evolving views on things like the efficacy of ventilators or mask use.

When CNN did a fact-check on the question, “Did Fauci change his mind on the effectiveness of masks?” they seemed worried about the glee Trump followers would feel if they simply wrote yes, so the answer instead became, “Yes, but Trump is also an asshole” (because he implied the need to wear masks is still up for debate). By labeling whatever the current scientific consensus happened to be an immutable “fact,” media outlets made the normal evolution of scientific debates look dishonest, and pointlessly heightened mistrust of both scientists and media.

Fact-checking was a huge boon when it was an out-of-sight process quietly polishing the turd of industrial reportage. When companies dragged it out in public and made it a beast of burden for use in impressing audiences, they defamed the tradition.

We know only a few things absolutely for sure, like the spelling of “femur” or Blaine Gabbert’s career interception total. The public knows pretty much everything else is up for argument, so we only look like jerks pretending we can fact-check the universe. We’d do better admitting what we don’t know.