The Right to Crash Cars into People

How Republicans across the country came to endorse a terrorist tactic against protesters. 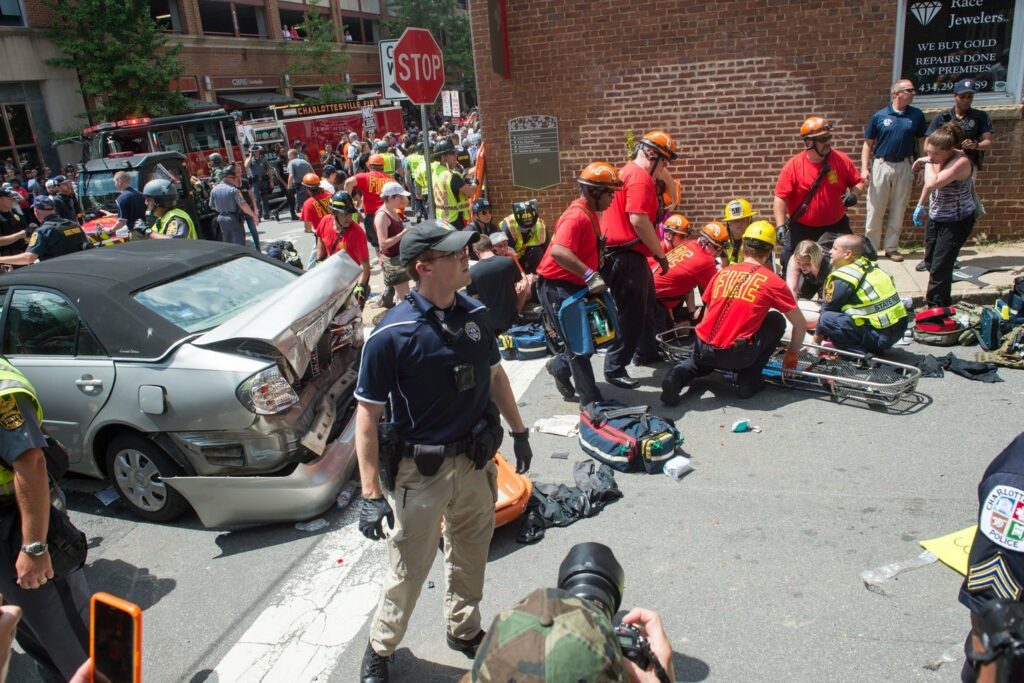 A woman receives first aid after a car ran into a crowd of demonstrators at the Charlottesville “Unite the Right” rally four years ago.

24 Apr 2021 – Earlier this week, Florida Republicans enacted a law they claimed would prevent riots in the state. Its real purpose, of course, was to discourage protesting and punish demonstrators. One of the bill’s provisions has received a fair amount of national attention, as it seems to give Floridians permission to attack protesters with their cars. The bill doesn’t exactly make it legal to run someone over, but it does shield drivers from civil liability if they injure or kill protesters on Florida roads.

In isolation, it’s hard to understand the purpose of such a curious provision. What problem does it solve? As the Florida American Civil Liberties Union pointed out, very few recent protests in the state involved violence or even vandalism, and police and prosecutors were already well equipped (some would say, more than well equipped) to handle whatever rioting might occur. If demonstrators blocking roads and snarling up traffic were a serious problem in Florida in need of a legislative remedy, surely thoughtful legislators could come up with a more effective or ethical response than making it less personally risky for people to injure or kill those demonstrators with cars. But efficacy and ethics don’t really seem to be guiding the decisions of Republican-run state legislatures lately.

To understand what’s really behind the bill, recall that it comes less than four years after a 20-year-old neo-Nazi named James Alex Fields Jr. deliberately drove a Dodge Challenger into a crowd of people counterprotesting the “Unite the Right” rally in Charlottesville, Virginia. Fields injured scores of people and killed a woman named Heather Heyer. The obvious and immediate response to this intentional attack was nearly universal shock and horror. Fields was charged with murder and convicted. But since just before that attack, and even more so after it, Republican elected officials across the country have been trying to make it easier for certain people to run over certain other people.

Ari Weil, a researcher at the Chicago Project on Security and Threats, counted six states that considered laws shielding drivers who attack protesters in 2017, but most of those “hit and kill” bills (as the ACLU refers to them) went nowhere. It took a few more years for the right-wing propaganda apparatus to fully numb conservative consciences, and prepare them to openly endorse an idea as plainly depraved as this one. In the meantime, the car attacks kept coming: In 2020, Weil tracked “72 incidents of cars driving into protesters across 52 different cities,” over the span of just over a month. The online far right memed about running over demonstrators regularly, and cops openly encouraged it in social media comments. Cops also, in cities such as New York and Detroit, participated in the practice themselves. In Boston last year, Police Sergeant Clifton McHale was recorded on a police body camera bragging about hitting demonstrators with a police cruiser. He was placed on administrative leave when that footage was surfaced by reporter Eoin Higgins. He is now, Higgins reports, back on desk duty.*

Now lawmakers seem to have overcome whatever reticence they may once have felt about formally endorsing automobile attacks. Five states besides Florida introduced similar bills this year, granting some form of immunity to people running into demonstrators. The Iowa measure passed the state House and awaits Senate approval. Oklahoma Governor Kevin Stitt just signed another version into law in his state. This one shields attacking drivers from criminal liability.

The impetus for the Oklahoma bill, according to the Republican lawmaker who authored it, was an incident in which a pickup truck driver drove into a Black Lives Matter demonstration in Tulsa, paralyzing one person. The driver claimed to be scared and, notably, was not charged with a crime. That is to say that it was apparently already legal to drive into protesters in Oklahoma; these politicians merely helped clarify that fact.

A few years ago, most people would have seen “politically motivated vehicle attacks” as a terrorist tactic pioneered by ISIS. Now American police regularly carry out these kinds of attacks, and Republican policymakers have officially endorsed the practice.

There’s something very telling about how the car (or police cruiser, or truck, or SUV) has been enshrined into law as an instrument of state-sanctioned violence. American conservatives are creating, really, a sort of Second Amendment for cars. Not the Second Amendment in terms of the literal text in the Constitution, but the Second Amendment as existing doctrine. The legal framework conservative politicians and jurists spent years crafting and refining to facilitate politicized and racialized gun violence in this country is now expanding to another of America’s omnipresent and deadly institutions.

Just as the heavily armed patriot is encouraged to consider himself deputized to carry out violence on behalf of the police (the only legitimate arm of the state in his eyes anyway), now certain drivers are permitted to harm certain people in defense of the social order. These drivers might have to claim afterward that they were ramming their multi-ton vehicles into pedestrians because they feared for their own safety, but it increasingly seems like they will be able to get away with simply saying, “They were in the way.”

It is a natural progression. The state has always used the automobile as a vital tool to manage and punish poor and Black Americans, whether that meant demolishing Black neighborhoods for highway projects or using traffic stop revenue to fund municipal governments. As Sarah A. Seo argues, the automobile is practically responsible for modern policing itself, as the need to regulate the use of cars without punishing certain “law-abiding” citizens “led directly to the problem of discriminatory policing against minorities.” A large majority of American interactions with police come in the form of traffic stops and crashes. The car was already a “symbol of freedom” only for certain Americans, and a means of oppressing and policing others. It is now just openly also a literal weapon used by the state to prevent people from protest and dissent. It’s as if the right absorbed a left-wing critique of American automobile culture and decided the problem with the whole idea was that the violence wasn’t literal enough.

Even if this progression follows a certain twisted logic, it was far from inevitable. Americans should be horrified at the speed with which this practice spread and then was normalized. While these laws may claim to protect only those responsible for “unintentional” crashes, they are effectively legalizing the attempted murder of people demonstrating for racial justice. As an Oregon cop put it in 2016, under a photo of Black Lives Matter demonstrators: “When encountering such mobs remember, there are 3 pedals on your floor. Push the right one all the way down.” In a few states, with maybe more to come, that’s simply policy now.

* A previous version of this article misstated that Clifton McHale was suspended without pay for bragging about hitting demonstrators with a police cruiser. He was put on administrative leave.