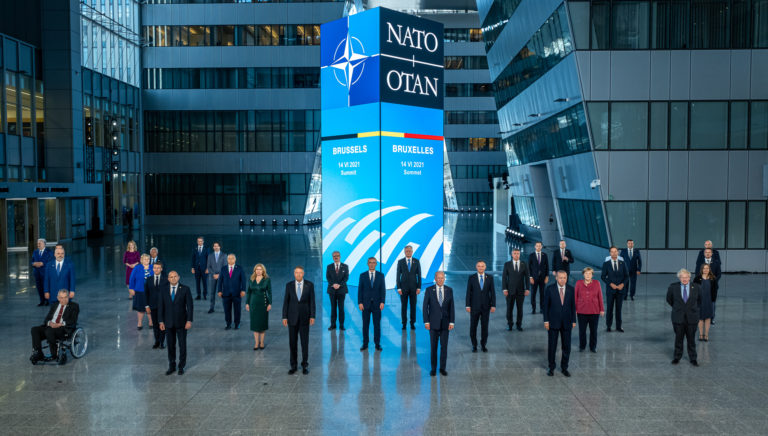 16 Jun 2021 – The North Atlantic Treaty Organisation (NATO) summit in Brussels on Monday [14 Jun] reminds us once again of what a hoax the United States had perpetrated on the former Soviet leader Mikhail Gorbachev in 1990 by assuring him that the western alliance would expand “not one inch eastward” once Moscow allowed German Unification and disbanded the Warsaw Pact.

Briefing Book #613 dated December 12, 2017 at the US National Security Archive located at the George Washington University in Washington, DC says as follows:

“U.S. Secretary of State James Baker’s famous “not one inch eastward” assurance about NATO expansion in his meeting with Soviet leader Mikhail Gorbachev on February 9, 1990, was part of a cascade of assurances about Soviet security given by Western leaders to Gorbachev and other Soviet officials throughout the process of German unification in 1990 and on into 1991, according to declassified U.S., Soviet, German, British and French documents posted today by the National Security Archive at George Washington University.

“The documents show that multiple national leaders were considering and rejecting Central and Eastern European membership in NATO as of early 1990 and through 1991, that discussions of NATO in the context of German unification negotiations in 1990 were not at all narrowly limited to the status of East German territory, and that subsequent Soviet and Russian complaints about being misled about NATO expansion were founded in written contemporaneous memcons and telcons at the highest levels.

“The documents reinforce former CIA Director Robert Gates’s criticism of “pressing ahead with expansion of NATO eastward [in the 1990s], when Gorbachev and others were led to believe that wouldn’t happen.” read more

It is this cold-blooded treachery and back-stabbing by the Bill Clinton Administration that rankles most in the Russian mind today, as the NATO enters the Black Sea and slouches toward Russia’s western borders. read more…

Suffice to say, Washington’s post-Cold War diplomacy in Europe has met with astounding success. The heart of the matter is that today the US critically depends on NATO:

The NATO brings to mind the classic paradigm of someone all dressed up and nowhere to go. It has to constantly reinvent a reason for its existence. Russia has been providing that reason — although, Moscow has no intentions of capturing territories beyond its borders. Of course, there is no question of a war between the NATO and Russia, either, since the latter is a thermonuclear power that can destroy the US many times over.

The NATO summit’s final communique issued yesterday once again puts Russia on the alliance’s crosshairs. It develops the theme in six paragraphs that are based on a self-serving narrative (Para. 9 to 15). And the alliance’s entire build up for the foreseeable future devolves upon tackling this perceived “Russian threat.”

Meanwhile, the Brussels communique for the first time in the alliance’s history also brings in China’s rise as posing a potential challenge. The US has been pressing for this in the recent years and has succeeded in including some references to China in the communique. (Paras 56-57.) The communique makes the following points with regard to China:

But, typically, the communique softens the blow by dissimulating a conciliatory attitude, saying NATO maintains “a constructive dialogue” and welcomes “opportunities to engage” with China in information exchange on respective policies and activities, to enhance awareness and discuss potential disagreements.

The communique urges China “to engage meaningfully in dialogue, confidence-building, and transparency measures regarding its nuclear capabilities and doctrine.  Reciprocal transparency and understanding would benefit both NATO and China.”

Make no mistake, this is Washington’s hand writing the NATO communique. Hence this mixed message. The fact of the matter is that many European allies would feel uneasy. For, China poses no military threat to the western alliance. The Europeans visualise a challenge from China largely in the economic sphere — trade, investment, technology, setting up global standards and so on.

China appears to have anticipated the US’ shenanigans. China’s mission to the EU promptly reacted with facts and figures, pointing out that in 2021, Beijing’s military spending stood at $209 billion in comparison with the alliance’s $1.17 trillion, which is over half of the entire global military expenditure and 5.6 times that of China. The statement said, “We will unswervingly defend our sovereignty and development interests, and keep a close eye on NATO’s strategic adjustments and policies toward China.”

An editorial in the Global Times said, “This NATO summit can be seen as a key point in the US and Europe’s attitude toward China in the security arena. Washington has raised the curtain for a political mobilisation campaign to use the NATO bloc to carry out strategic competition with China.

“The US wants to create a narrative that equates its own hegemony to the collective strategic advantage of the West and form a consensus among 30 countries. As long as NATO countries are bound by a common hatred for China, the interest links between Western countries and China will lose its moral basis and the US could force small European countries to serve its China strategy, politically exploiting them for US interests.”

QUAD is a shaggy-dog story

Beijing’s diplomatic countermove will be to strengthen China-European Union cooperation. It works to China’s advantage that the US does not have the sort of clout to dictate policies to the EU as it has on the NATO platform. (German Chancellor Angela Merkel has already counselled caution about NATO closing the door on China.)

What is Washington’s strategy in creating a China vector for NATO, which was in the first instance formed for the security of the Euro-Atlantic space?

Here the parallels are striking with the mid-1990s when the US turned its back on the assurances given to Gorbachev and proceeded with the NATO expansion in anticipation of a Russian resurgence in a conceivable future.

The US anticipates that within the coming decade, China must be stopped from overtaking it as the number one global power. The US needs an alliance system to cope with China’s emergence. The QUAD is a shaggy-dog story, in reality.

Second, to assuage the Russian apprehensions regarding the NATO’s eastward expansion, Bill Clinton administration had offered to Boris Yeltsin that Moscow would be consulted on the NATO plans. Thus was born the NATO-Russia Council. But it was an empty gesture as the US anyway went ahead and did whatever it wanted with NATO expansion.

Similarly, the NATO claim that it has a “constructive dialogue” with China is sheer sophistry. The NATO will go through the charade of a dialogue for a while to calm Chinese nerves before taking the gloves off within 2-3 years at the most.

Third, NATO’s expansion in the 1990s was helpful for Washington to create a window to forge a unified strategic posturing with European allies vis-a-vis Russia. Similarly, the US has begun working hard for the past year or two to get the European allies on board its strategy toward China. The NATO becomes the hub where this work in progress is best handled.

Fourth, the NATO expansion in the 1990s inevitably complicated Russia’s aspirations to become part of a new common security space between Vancouver and Vladivostok. On the contrary, the US secured a say in Russia’s bilateral relations with the NATO countries.

Similar US strategy is at work here to complicate China’s relations with its European partners. Already, the US could block its major NATO allies from partnering with China in 5G technology. The US aims to vanquish China’s BRI projects in Europe on security grounds.

Equally, per NATO guidelines, China can be eventually denied access to western technologies altogether. The point is, while the 30 heads of state and government have expressed concern over China’s “coercive policies”, “opaque ways”, its “use of disinformation” and have upfront called on Beijing to “uphold its international commitments and to act responsibly in the international system.”

Finally, as in the case with Russia, the US is pushing China toward an infructuous arms race. Of course, this creates the rationale for increased defence spending by NATO countries, which would in turn promote exports of US military technology to Europe.

Lockheed Martin’s F-35 Lightning II are expected to sell in the hundreds, if not thousands, to the US’ allies through 2035. Already, the planned initial buyers include Japan (147 aircraft), South Korea (80) and Australia (upto 100).

The NATO is a lucrative hunting ground for the American arms industry. The bigger the NATO’s threat perceptions, the greater the scope for US exports of weaponry.

In the final analysis, NATO’s naming of China as a systemic challenge would have profound implications for international security. Prima facie, it will draw China and Russia even closer together.

As the US strategic containment of China intensifies, Beijing will come under pressure to boost its deterrence and rapidly increase the number of commissioned nuclear warheads and the DF-41s, the strategic missiles that are capable of long-range strikes and have high-survivability.

China will be on guard as regards its sovereignty and will prepare for an intense showdown. Hu Xijin, the editor-in-chief of Global Times, wrote recently, “In this scenario, a large number of Dongfeng-41, and JL-2 and JL-3 (both intercontinental-range submarine-launched ballistic missile) will form the pillar of our strategic will. The number of China’s nuclear warheads must reach the quantity that makes US elites shiver should they entertain the idea of engaging in a military confrontation with China.”

There is an African proverb, ‘When elephants fight, it is the grass that suffers.’ To be sure, the Asian region is becoming the theatre where the US-China tensions will play out. Inevitably, this would cast shadows on the region’s extraordinary prospects for growth and development. The prospects for the ‘Asian Century’ may diminish. And that can only work splendidly for the US, but Asian countries themselves will be the poorer for it.