The American Working Class Must Come to Assange’s Defense!

10 Jun 2021 – Julian Assange’s father and brother, John and Gabriel Shipton, are touring the United States to call for the WikiLeaks founder’s release. They are visiting several American cities including Miami, Boston, Philadelphia, Milwaukee, San Francisco and Denver, before finishing in Washington DC.

Assange is a multi-award-winning journalist. His most significant work, carried out through WikiLeaks with the heroic whistleblower Chelsea Manning, is the publication of the Iraq and Afghan war logs and the US diplomatic cables in 2010 and the Guantanamo files in 2011. These releases exposed war crimes, torture, coup plots and corruption by the US and its allies across the globe.

For this reason, Assange has been subjected to more than a decade of vicious uninterrupted persecution by the imperialist powers. He is currently in London’s Belmarsh maximum-security prison, fighting extradition to the US, where he faces a potential 175-year sentence for charges under the Espionage Act. 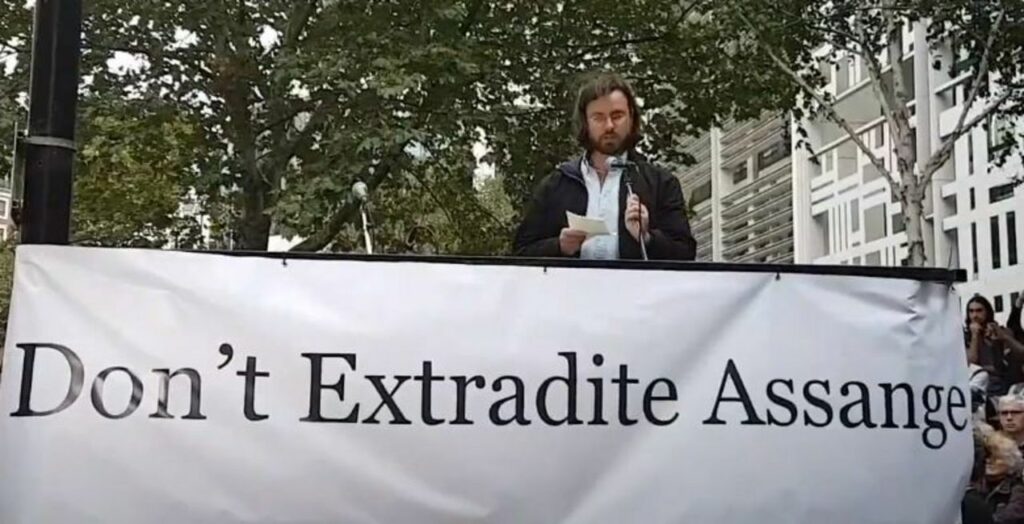 On January 4, UK judge Vanessa Baraitser barred Assange’s extradition to the US on the grounds that doing so would be “oppressive” by virtue of his mental health and risk of suicide in the US prison system. However, Baraitser upheld every other aspect of the American government’s flagrantly anti-democratic case for extradition. The ruling therefore placed Assange’s case in a holding pattern while the outcome of former US president Donald Trump’s fascist coup plot was still unclear. Assange has since been denied bail and kept in Belmarsh while the US prepares its appeal to the High Court.

His continued incarceration is inhuman. The only charge Assange faces has been ruled out of order by the British court, yet the same court has ordered that he remain in prison. He is kept in a ten-square-yard cell for 22 hours a day, allowed out to take a shower, exercise and collect food and anti-depressants.

Stella Moris, Assange’s partner, recently described him as “barely hanging on inside Belmarsh… this feels like an endless punishment. At times he is in such despair he thinks he is a burden, so suicide is a very real fear.”

Moris continued, “He needs human interaction and mental stimulation. I have seen him in a terrible state, unable to even string a sentence together.

“It’s tough, navigating life inside. The prison has its own criminal justice system and he has been in trouble [with his guards] for the smallest things such as asking for a spoon when he wasn’t entitled to one.” 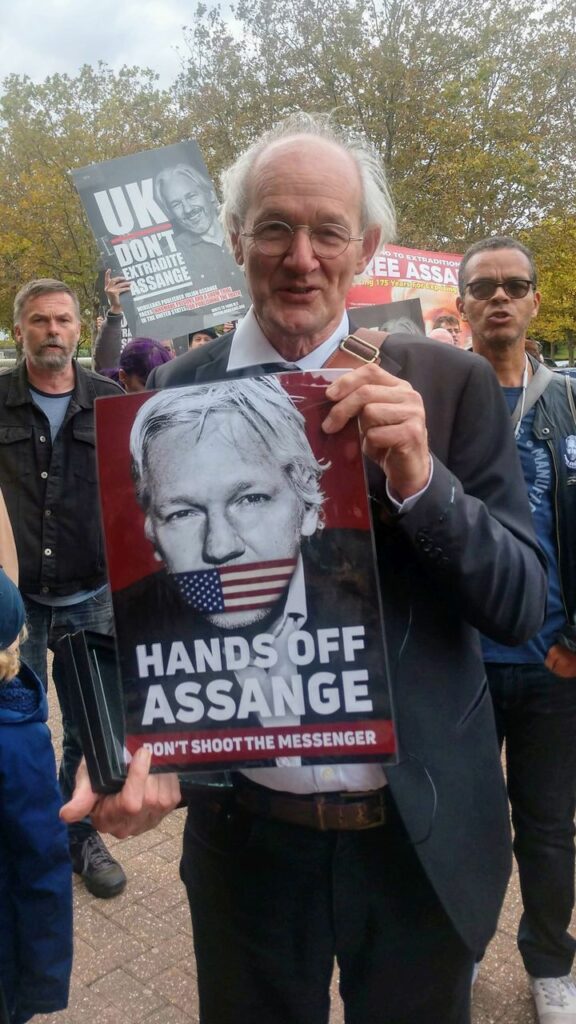 The Shiptons’ visit to the US, which follows tours of Australia and Europe, is a recognition that, should the appeal verdict go against Assange, the main front in the campaign for his freedom will be fought in America.

There is no reason to exclude such a rotten ruling. One of the first acts of the incoming Biden administration was to signal its determination to continue the pursuit of Assange instigated by Trump. The British state will therefore feel far more at ease shipping the WikiLeaks founder to America than it did when Trump’s coup hung in the balance.

The threat of extradition that has prompted the American tour in defence of Assange brings the question of questions in his defence campaign to the fore: which social force can secure his release?

The tour of the US by the Shiptons highlights the most politically consequential feature of Assange’s case—his systematic slandering and isolation by the media and the pseudo-left groups.

Nowhere is this truer than in America. For the best part of a decade, the major news organisations ganged up to slander the WikiLeaks founder as a hacker, terrorist, sexual predator, or Russian agent. This has not been fundamentally reversed by the eleventh-hour acknowledgement of the chilling implications of his case for democratic rights by the New York Times and other publications. Such protests as have been made are framed as humble appeals to President Biden that do not risk so much as embarrassing his administration. 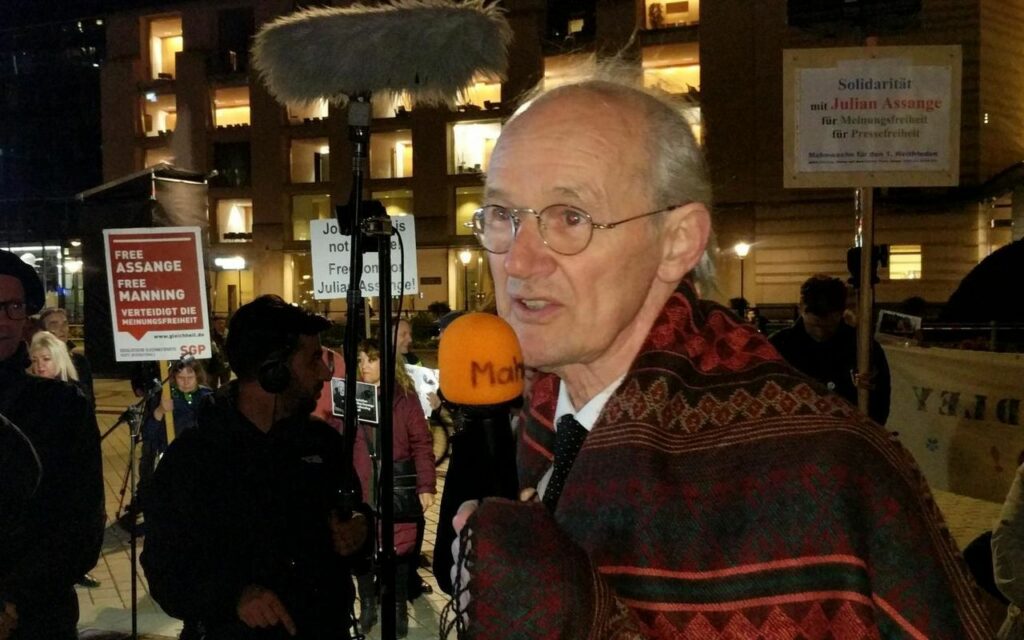 The wholesale degeneration of the US media into an appendage of the national security state will be thrown into sharp relief this Sunday—the 50th anniversary of the first release of the Pentagon Papers by the New York Times. At that time, the paper was prepared to publish documents leaked by whistleblower Daniel Ellsberg detailing the disastrous state of the US invasion of Vietnam, and to defend itself against state prosecution in court.

Pseudo-left organisations like Socialist Alternative joined the witch-hunt of Assange by lending credence to the Swedish state’s fabricated claims of sexual assault, or else kept quiet like Jacobin and the Democratic Socialists of America. Jacobin’s stony silence has only been recently broken with two comments published before Biden took office, and an interview in April quoting former CIA whistleblower Jeffrey Sterling that Assange will not receive a fair trial. The warnings belatedly made of the threat posed to press freedoms and democratic rights only underscore a politically criminal refusal to mobilise anyone in Assange’s defence.

No faith whatsoever can be placed in such soporific gestures tailored to the political imperative of supporting the Democrats. The US ruling class is determined to see Assange destroyed as a pre-emptive strike against mass opposition to its imperialist warmongering.

The only force which can secure Assange’s release is a movement of the international working class, whose American contingent must play a leading role.

Yesterday, John and Gabriel Shipton were in Boston to receive the 2021 Sacco-Vanzetti Memorial Award for Social Justice from the Community Church of Boston, on behalf of Assange. The award is entirely appropriate.

Nicola Sacco and Bartolomeo Vanzetti were Italian anarchists framed for murder and executed in the 1920s, at the height of a red scare which saw the arrests of thousands of left-wing figures. This included the use of the Espionage Act to imprison and censor socialists, originally for their opposition to the imperialist slaughter of the First World War.

A massive global campaign was launched to secure Sacco and Vanzetti’s release. But over time the campaign’s organisers side-lined efforts to organise a fightback by the working class in favour of respectful appeals to “progressive” politicians, elements of the state and judiciary. In the words of Max Shachtman, who soon after played a role in founding the American Trotskyist movement, “Because it failed or refused to understand the intensely class nature of the case, the defense succumbed to the demands of the lawyers; it exchanged the movement of the workers for the motions of the lawyers; it sold the class birth-right of Sacco and Vanzetti for a mess of liberal milk and pap.”

The World Socialist Web Site stands in the tradition of those who sought Sacco and Vanzetti’s freedom by the only means possible—class struggle. Now as then, Assange’s fate rests in the hands of American workers and their class brothers and sisters internationally.

Under conditions in which the Biden administration and the US media are spewing the poison of the Wuhan lab lie in preparation for military confrontations with China, in which news of COVID-19 outbreaks is suppressed, and striking workers suffer a press blackout, the fight for truth and democratic rights against lies and war will grip the working class masses. The campaign to free Assange is the spearhead of this struggle.