The Pentagon Papers at 50: Press Freedom and Whistleblowers Still at Risk

17 Jun 2021 –Legendary whistleblower Dan Ellsberg leaked the Pentagon Papers fifty years ago, a courageous act of truth-telling for which he later faced life in prison. He hasn’t stopped since. Last May, just weeks after turning 90 years old, Ellsberg made yet another disclosure of classified national security information. He was speaking on a panel at the University of Massachusetts’ “Truth, Dissent, & the Legacy of Daniel Ellsberg” conference with whistleblower Edward Snowden, which one of us [Amy] moderated. 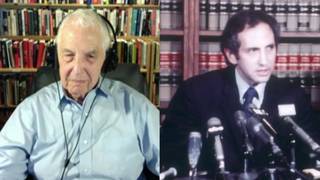 “Let me tell a truth that I’ve had for 50 years,” Ellsberg said, before reading from a secret 1958 report describing the willingness of U.S. officials to launch a nuclear war. “I copied that study. It was in my top-secret safe in 1969. And I’ve had it ever since,” he continued.

Ellsberg was working at the RAND Corporation and as a consultant to the Kennedy administration. He was also a U.S. Marine officer, and participated in combat missions in Vietnam.

In 1969, inspired by the growing anti-war and draft resistance movements, Ellsberg photocopied the Pentagon Papers, a secret, 7,000-page history of U.S. decision-making during the Vietnam war. Unable to find a U.S. Senator willing to take the documents, he leaked them to the New York Times.

The Times published its first Pentagon Papers piece on June 13th, 1971. Two days later, a federal court granted President Richard Nixon’s request for an injunction, blocking further publication. After Ellsberg’s identity as the leaker became public, he and his wife Patricia went underground, as he continued to distribute copies of the documents to other newspapers.

Nixon’s national security adviser, Henry Kissinger, called Ellsberg “the most dangerous man in America.” Nixon, in a recorded Oval Office conversation with his Attorney General, said, “we’ve got to keep our eye on the main ball. The main ball is Ellsberg. We’ve got to get this son of a bitch.”

On June 30th, the Supreme Court ruled in favor of the New York Times, barring government censorship of the press and allowing continued publication of the Pentagon Papers.

Nixon intensified his campaign targeting the whistleblower, afraid of what he might release next. As Ellsberg recounted on Democracy Now!, “He burglarized my former psychoanalyst’s office, sent 12 Cuban assets of the Bay of Pigs up to incapacitate me totally on the steps of the Capitol. On May 3rd, he overheard me on illegal, warrantless wiretaps.” When the Nixon administration’s misconduct was revealed, the judge threw out the espionage case against him.

Dan Ellsberg’s example has encouraged other whistleblowers, among them Edward Snowden, who, while a contractor at the National Security Agency (NSA), participated in the development of the government’s secret, global, dragnet surveillance program. He leaked a massive trove of documents in 2013, and has lived in exile in Russia ever since.

At the conference on May 1st, Snowden said of whistleblowers who inspired him, “They had stood up at great personal risk to tell the public an essential truth that was being intentionally denied to them for political purpose. Eventually, you believe that this is what looks more right than going back into the office and perpetuating a system of injustice quietly, day after day.”

Snowden continued, “Reality Winner and Daniel Hale and Chelsea Manning, Thomas Drake, Terry Albury and others who have come forward in the last decades have vindicated Daniel Ellsberg’s approach…because the abuse of power is not something that’s going away.”

Reality Winner was an NSA contractor when she leaked information to the press describing alleged Russian interference in the 2016 elections. Imprisoned for over four years, she was released on June 2nd to a half-way house for the remaining months of her sentence. Her family is demanding a pardon.

Daniel Hale pled guilty to leaking documents about the U.S. drone program of targeted assassinations in Afghanistan, Syria and Iraq, which he participated in while in the Air Force. He will be sentenced in mid-July.

Ellsberg’s May 1st disclosure was about a 1958 conflict over several small islands, between mainland China and Taiwan. The U.S., Ellsberg revealed, drew up plans to launch nuclear weapons against China to support Taiwan. The report predicted that a U.S. first-strike on China would provoke a nuclear counter-strike by the Soviet Union, killing millions.

At 90, Ellsberg is still tirelessly advocating for the rights of whistleblowers and a free press, calling on the Biden administration to drop its case against Julian Assange, the Wikileaks founder who published leaked information documenting war crimes, and its prosecution of Daniel Hale.

He concluded his recent interview on Democracy Now!, “I’ve certainly been led, more than almost anyone, to appreciate the necessity of our First Amendment, the protection of the freedom of the press, the freedom of thought. You can’t have democracy without it.”