Clash of Paradigms: The Threat to Our Food Supply 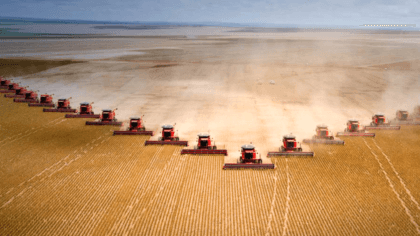 15 Jul 2021 – Since the pandemic we’ve been hearing more about “systems change,” a concept that has been floated ever since the advent of systems theory (a la Fritjof Capra et. al.)

Systems theory describes the natural world as a system applicable to social systems as well. Clearly something is wrong with “our system” to have landed us where we now find ourselves, whether we label it capitalism or democracy or, most inclusively, patriarchy. We must change our way of life to arrest climate change for the survival of the human species. The pandemic, with its year-long work stoppage and economic slowdown, seemed to provide an opportunity to reflect upon where we are and to reimagine a future. Here is Joanna Macy: “We are in a space without a map. With the likelihood of economic collapse and climate catastrophe looming, it feels like we are on shifting ground, where old habits and old scenarios no longer apply.”

Somehow this concept of transformation has reached the World Economic Forum. Klaus Schwab, founder and director of the WEF, has redirected its entire web of partnerships toward seeing “the opportunity” to make fundamental change. Schwab refers to the “system” and uses a lot of familiar green-worthy terms to describe it in his book, published last July, Covid-19; The Great Reset. Words like “interdependence”, “equity”, and of course the ubiquitous “sustainable.”

But even with all the resonant language, this is not truly the kind of systems change ecologists and progressives have been talking about. Rather, this is a fundamental, global transformation that will protect and invigorate the existing system and those who benefit from it.

Now we are seeing this framework applied to the food system, the complex chain of services that conveys food to our tables. That system revealed its inherent failures at the onset of the pandemic. Industrialized agriculture, which relies heavily on long distance food delivery, poorly paid farm workers, monoculture, and chemical inputs that strip the soil of its productive capacity, the whole system stopped.

After the initial lockdowns resulted in the dumping of huge quantities of vegetables and dairy products that rotted for lack of transport and stable outlets like restaurants and schools, local farmers took up the slack; and the revival of CSAs (Community Supported Agriculture) helped to keep fresh food on our tables. For a while it did seem that the pandemic was a boost to the kind of fundamental changes we needed to make toward localized people-based economic systems.

Industrialized agriculture has contributed hugely to the thickening carbon cloud hovering over our heads. Depending on how you calculate it (and a recent study indicates that it has been vastly underestimated) ag is responsible for anywhere from 30-50 percent of GHG emissions from transportation to the disgusting feedlot production of meat.

Small family farms, which actually feed about 80 percent of the world’s population, contribute little to that choking mass. In fact, during the last decade, we have learned that a certain kind of food production as practiced on small organic farms actually provides the best – and in fact the only – known method of drawing down carbon from the atmosphere. Along with forests, crops remove carbon dioxide from the atmosphere, releasing the oxygen and processing the carbon through photosynthesis, not only to grow the carbohydrates that feed us but nourishing millions of microbes in the roots that actually enrich the soil. It’s an elegant win-win, so natural – one might say “organic” — that the French government actually proposed at the Paris COP in 2015 that if the world would dedicate 0.4 percent of its land base to growing plants – without unnecessary chemical inputs – we could reverse carbon emissions entirely.

That was apparently too radical for the representatives at the international climate meeting to contemplate, given the thousands of acres of land currently dedicated to monocropping vast quantities of food inoculated with pounds of chemical inputs mostly derived from fossil fuels. Perhaps it was the ugly head of private property rights that at least so far has made the French proposal inconceivable.

Many family farmers adopted these methods, which rely on initial deposits of rich compost and other practices to put the carbon back into the ground, calling it “regenerative” agriculture because it enriches the soil, retains moisture, and enhances food production while encouraging the diversity of the surrounding natural environment.

But the mainstream food system has continued its cancerous growth.

Ag has become increasingly dominated by a few huge companies which own not only the seed but the fertilizer, the tractors, the processing plants, and even many of the grocery stores. This takeover has been facilitated not only by chemical inputs but by the discovery that genes could be modified using genetic materials from other organisms to resist insects and respond only to certain inputs produced by the same companies. The huge outcry against GMOs did not eliminate them and indeed the science of genetic modification has continued to develop.

The upcoming Summit even its planning stages has already become a battlefield between these two types of farming, conventional and regenerative (now known as agroecology) and the two paradigms that support them. While the world focuses on other things – the vaccines, the weather, the production of nuclear weapons and so forth – powerful forces have moved into play to gain increased control over the food supply.

Though not named as sponsor, the WEF has deftly formed a partnership with the United Nations in accord with in its plans to “build back better” by engaging “multistakeholders” in the process of transforming the global economic system. Under the banner of your family-friendly UN (and with access to its huge database) it has brought numerous specialists from its own ranks into the field of play. In the pre-summit Dialogues, where nothing controversial is discussed, the Specialists, though a noticeably mixed group of women and people of color, are frequently associated with the WEF.

Also in the background is Bill Gates, one of the world’s most powerful financiers is working his dollars from behind the curtain. Agnes Kalibata, the woman who is the Special UN Envoy to the summit – that is to say, its director — is also the head of the Alliance for a Green Revolution in Africa (AGRA), a “nonprofit” funded by the Bill and Melissa Gates Foundation.

Gates by the way now owns more farmland acreage than anyone else in America.

This sleight of hand has come under fire from civil society, particularly the organization of European small farmers Via Campesina, the Committee for Food Safety (CFS), and Slow Food as well as a number of scientists. The new partnership, they charge, is illegal and undemocratic, inasmuch as it was arranged without a vote of the General Assembly. The role of AGRA is particularly grievous, as its many promises for the benefits of a “Green Revolution” were failures. Sadly, only a handful of American farm groups have stepped up to express their opposition.

Critics argue that the FSS has also bypassed two established organizations that have represented farmers for a long time, especially the Committee for Food Safety and, to a lesser extent, the FAO; both have supported agroecology as the necessary direction for farming. Although it calls itself a “People’s Forum” and invites everyone to participate, the FSS has failed to include a fair representation of food producers.

Why does all this matter and what the hell is the point, you might ask. Well, it has taken me hours and days to sort through the complicated tangles of this gigantic shift in global power, and if it fully aggrandizes all that it intends, the food on your table won’t even come from a giant pesticide-laden field, but from a laboratory.

Bill Gates is heavily invested in a number of companies including Impossible Foods and GingkoBioworks who are moving into the vegan market with products created by digital engineering of proteins like meat and dairy. This is actually fake food. Scientists now can move into cellular DNA and change it, using the new CRISPR technology I believe. Gates has been quoted as saying that the citizens of wealthy countries should give up eating meat altogether. While I appreciate that his desire to become a climate hero might be sincere, it’s alas, the wrong solution.

Consumers may well be deceived that these products are good for the climate and healthier than meat, but the components of these fake burgers will be made from genetically modified soya from pesticide-laden fields – nothing particularly organic or healthy.

Such engineered foods, produced in vast laboratories, protected by convenient intellectual property rights and scant regulation, trucked and flown all over the world according to neoliberal trade rules and packaged to look like ordinary hamburgers are not the solution to the hunger crisis or the climate crisis. They are just another gift to the corporate capitalist monopolistic system that already produces most of our food and lots of other stuff as well, facilitated by Big DATA supplied by Google and Amazon, with the emerging 5G cell phone network that will permit the tracking of consumer preferences. With robots at work in the fields, the new agriculture has been called “farms without farmers.” In a scenario from 1984, the Corporation appears to be hell-bent on taking over and ruling the messy disorganized fragmented world of global society that we used to call home. As Henry Kissinger once said, “Control food and you control the world.”

The big question for us is, how will the outcome of this summit affect our local family farmers? Will it drive up prices and squash the already meager profits of farmers struggling to hold onto their already over-priced lands in a real estate market driven by corporate investors? What, if anything, can we do to protect the local farmers whose fresh produce, meats and dairy fed so many of our families during the pandemic? And with climate change bringing mega-drought and the omnipresent threat of its evil twin, forest fire, how are we going to protect our own food supply?

Stephanie Hiller is a free lance writer who blogs at “Particle Beams”. She is an adjunct instructor at Santa Rosa Junior College, where she teaches autobiographical writing to older adults. She lives in Sonoma.