The Rise of Space Junk and the Fall of Reason 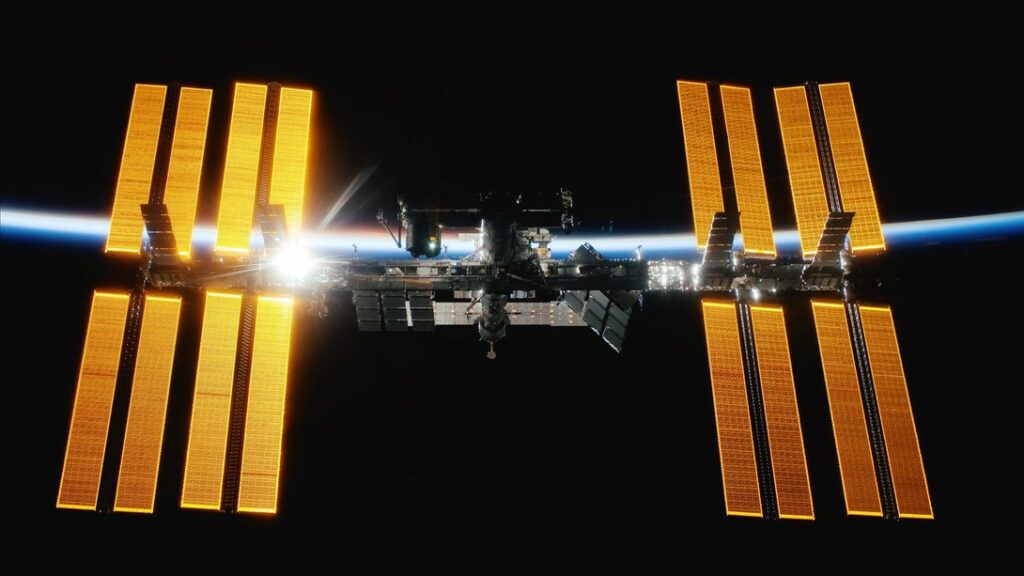 Astronauts in the International Space Station regularly have to avoid catastrophic collisions with space debris.
Image from Wall Street International.

23 Jul 2021 – Above our heads, man-made satellites wage war against the stars.

On Earth, a handful of CEOs plan to put hundreds of thousands of satellites in low Earth orbit—in addition to the 5,0001 satellites already launched.

Altogether, these satellites will outnumber the stars visible to the naked eye tenfold.

In a previous article, I described mega-constellations of satellites for telecommunications and discussed astronomers’ deep concerns about them. I’m a star-gazer myself. Learning about the environmental impacts of this unprecedented space program continues to shock me.

Elon, honey, can you take out the space trash tonight?

Since the 1950s, communication satellites have been used for long-distance voice and data transfer. Most satellites never come back to Earth; at the end of their useful life, they become garbage. Today, millions of objects orbit the Earth. Most of them no longer function: they’re space junk.

Moriba Jah2 from Austin University explains that some objects are as tiny as a speck of paint; some are as big as a school bus. Less than one percent of these objects are tracked. Objects smaller than 10 cm (four inches) cannot be tracked.

There are no traffic rules in space3. In 2020, the inhabited International Space Station (ISS) nearly had three catastrophic collisions with space debris. Satellite operators do not always share information and their opinions on the location of space debris can differ.

In 2019, a European Space Agency (ESA) satellite risked colliding with one of Elon Musk’s Starlink satellites—but the Agency could not reach Starlink’s operators. The ESA’s satellite had to change orbit, quickly.

When space becomes too crowded with debris, a series of collisions occur. Each collision produces more debris, increasing risk of yet more collisions. Called the Kessler Syndrome4, we can only manage it by actively removing our telecom junk from space.

Nature’s1 May 2021 report reveals that each of Elon Musk’s satellites operates for only five to six years—less than a personal computer. Musk swears he’ll take out his trash by having dead satellites re-enter the atmosphere and turn into dust.

So, beside his 42,000 functioning satellites, expect an additional 4,200 de-orbiting satellites at all times. Expect 8,400 new satellites launched each year to replace the ones that no longer work.

Every day, Starlink alone can produce about six tons of electronic waste that re-enters the Earth’s atmosphere. This junk increases the risk of cascading collisions with untracked debris. Indeed, “a major fragmentation event from a single satellite could affect all [satellite] operators in LEO [Low Earth Orbit]”.1

Make a wish on a falling satellite!

During satellites’ re-entry into the atmosphere, pieces large enough to harm people, wildlife and property can fall. NASA recommends a human casualty risk lower than 1/10,000 per satellite re-entry. However, launching permits do not consider the cumulative or combined risks of launching hundreds of thousands of satellites.

Operators do not always respect safety standards1. Scientists find that pieces larger than 10 cm might not fully disintegrate when they fall back to Earth5, and yet SpaceX claims that their next-generation satellites will completely turn into dust. No agency has tested this claim; and no agency can require other satellite operators to turn their debris into dust.

If you watch a falling satellite, make a wish that everyone will stay safe!

During a satellite launch, rocket fuels (e.g. hydrazine) and rocket parts that contain hazardous substances may fall into the ocean and harm marine life.1

In the upper atmosphere, high temperatures (generated by friction) lead to the formation of ozone-consuming chemicals.6 Ozone provides a protective layer around the Earth. Depleting it can increase people’s exposure to the sun’s ultra-violet light and cause skin cancer.

Forty years ago, NASA scientist Michael Zolensky was looking for comet and asteroid dust in the high atmosphere. Mostly, he found particles of rocket exhaust, spacecraft protection paints and aluminium. Do space engineers know this?

Martin Ross of The Aerospace Corporation confirms a lack of interdisciplinary communication. Scientists and engineers need to talk—but “that usually doesn’t happen.”

But solid-fuel rockets cause the most damage to the ozone layer—because of their hydrogen chloride and alumina emissions1.

A solar flare can showcase Northern Lights over Hawaii and knock out all satellites | Image from Wall Street International.

Deploying 5G networks that use millimetre wave frequencies on the Earth’s surface could significantly jam satellite weather and climate observations8.

Besides Earth-based 5G radio-frequencies, even higher frequencies used by future satellite constellations could interfere with weather observations. Facebook’s constellation is still experimental, but it might use frequencies near 88.2 gigahertz, which weather-observing satellites9 currently use.

Radiation all over (and above) the Earth’s surface

The magnetosphere (the magnetic envelope surrounding the Earth) shields our planet from solar and cosmic particle radiation. How/does microwave radiation emitted by satellites impact it?

The Van Allen belts surround and protect the Earth with electric charges. Could satellites’ microwave radiation emission drain the belts’ electrons into the atmosphere, and change its electric properties?

How are the Schumann resonances, the electromagnetic “heartbeat” of the atmosphere to which living beings on Earth are attuned, affected by satellites’ emissions?

There are very few studies of millimetre waves’ impacts on plants and animals10. Consequently, predicting the effects of tens of thousands of satellites beaming millimetre waves on biodiversity is nearly impossible. As long as we fail to limit deployments, we risk increasing loss of biodiversity.

Unlike Earth-based networks, satellite constellations will virtually radiate even areas with low population density. There will be no place for humans and wildlife to escape microwave radiation—or its potentially harmful effects.

The Earth’s gigantic electric circuit allows a permanent flow of electrons from the ionosphere to the planet’s surface, and back to the ionosphere when lightning strikes.

According to Eastern medicine, this electric current flows supportively through our chakras and meridians. The potential health effects of satellites beaming radiation from the ionosphere—and interfering with the Earth’s natural electromagnetic fields—have not been studied.

The Moon is the Earth’s only natural satellite | Image from Wall Street International.

The 1967 Outer Space Treaty defines countries’ liability regarding the consequences of launching rockets from their soil. Despite good intentions, this treaty allows nations and corporations to fill space with unlimited numbers of spacecraft.

New ITU rules require an operator to put satellites in service shortly after filing the application. Such policies favour large companies who can produce satellites industrially and meet these time requirements.

Ever-increasing space debris can be limited by disintegrating (de-orbiting) satellites in the atmosphere. However, there are no binding rules for satellite operators. Current guidelines are obsolete and inappropriate for mega-constellations.

Aaron Boley, from the University of British Columbia, reported that these emergent mega-constellations will need better governance—and fast. Could aerospace engineers evaluate and mitigate cumulated risks from mega-constellations? Could potential risks to the environment, climate and health be weighed along with risks from falling satellite debris? Is the ITU up to these tasks?

What matters more: allowing wealthy corporations to build whatever they want, unabated—or respecting Heaven and Earth and limiting telecom growth?

A solar flare could turn off the sat-lights

Solar flares11 are among the most violent events in our solar system. They occur when the sun’s magnetic field brutally and suddenly changes, emitting huge amounts of electrically-charged particles at thousands of kilometres per second.

When a powerful solar flare hit the Earth in 1859, it created a solar storm that set North American telegraph offices on fire and showcased Northern Lights over Hawaii12.

If a similar flare reached the Earth today, it would knock out all satellites—and satellite-dependent Internet access and banking systems. It could shut down power grids for months!13 Back in the year 774, a solar flare 20 times larger may have hit our planet.

In 1989, a much milder event caused a large-scale 9-hour power outage in Quebec, and satellites lost control. While we now can predict major solar flares a few days before they hit us and preventively shut down power grids, satellites remain vulnerable.

However, their impacts on the environment have hardly been studied—while first reports mention substantial effects on climate change. Rocket launches produce a variety of substances with highly potent greenhouse effects. Dust produced from the disintegration of satellites could also accelerate global warming.

Some constellation operators propose using many less satellites—which could provide a much better balance between quality of service, environmental impacts and cost.

Space is an under-regulated realm. Large, private corporations can deploy technology without limits—and then hold nations liable for their mistakes. Given the unknown consequences of deploying satellite mega-constellations on the environment, health and astronomy, we urgently need international regulations designed by subject-matter experts.

Consumers can demand that local Internet service providers provide speedy, reliable and affordable wired broadband. Driven by knowledge of climate change and the Earth’s limited resources, entrepreneurs and engineers should make the best possible use of the technology and infrastructure we already have.

Launching thousands of satellites might meet the goals of a few greedy billionaires, but not of a sustainable society.

Miguel Coma is an engineer in telecommunications and an Information Technology architect. After over two decades of professional activity in various industries, he began to write, speak and consult about our digital environmental footprint. He believes in peoples’ potential to use technology wisely and create sustainable progress.