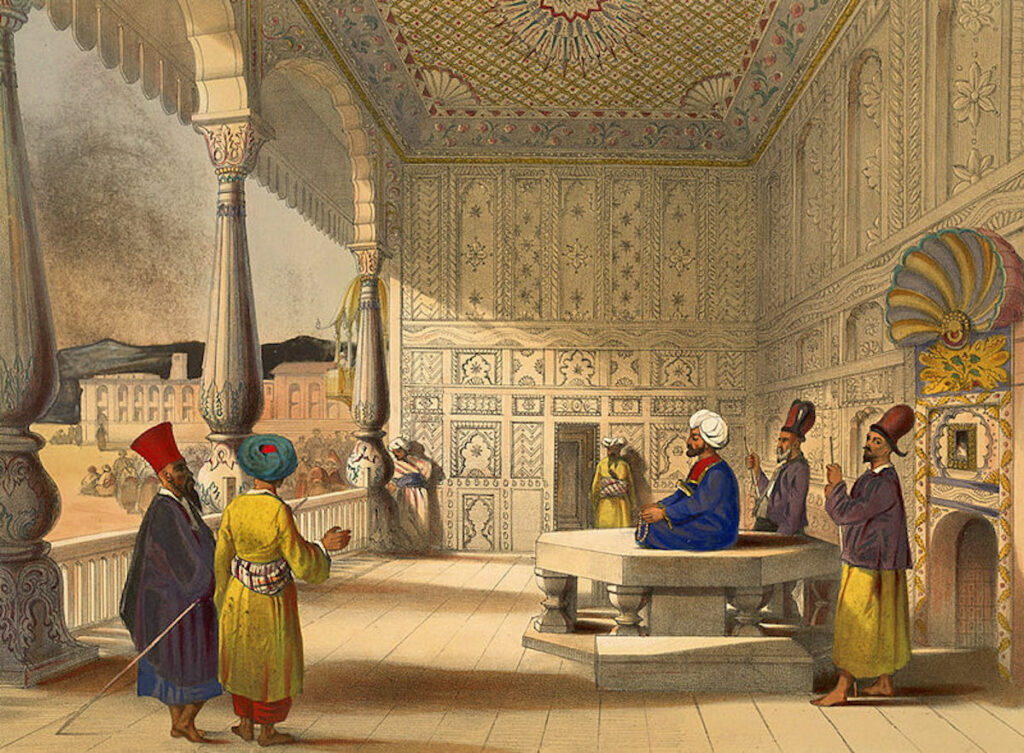 The Great Game: This lithograph by British Lieutenant James Rattray shows Shah Shuja in 1839 after his enthronement as Emir of Afghanistan in the Bala Hissar (fort) of Kabul. Rattray wrote: ‘A year later the sanctity of the scene was bloodily violated: Shah Shuja was murdered.’ Photo: Wikipedia

13 Jul 2021 – Chinese Foreign Minister Wang Yi is on a Central Asian loop all through the week. He’s visiting Turkmenistan, Tajikistan, and Uzbekistan. The last two are full members of the Shanghai Cooperation Organization, founded 20 years ago.

The SCO heavyweights are of course China and Russia. They are joined by four Central Asian “stans” (all but Turkmenistan), India and Pakistan. Crucially, Afghanistan and Iran are observers, alongside Belarus and Mongolia.

And that leads us to what’s happening this Wednesday in Dushanbe, the Tajik capital. The SCO will hold a 3 in 1: meetings of the Council of Foreign Ministers, the SCO-Afghanistan Contact Group, and a conference titled “Central and South Asia: Regional Connectivity, Challenges and Opportunities.”

At the same table, then, we will have Wang Yi, his very close strategic partner Sergey Lavrov and, most importantly, Afghan Foreign Minister Mohammad Haneef Atmar. They’ll be debating trials and tribulations after the hegemon’s withdrawal and the miserable collapse of the myth of NATO “stabilizing” Afghanistan.

Let’s game a possible scenario: Wang Yi and Lavrov tell Atmar, in no uncertain terms, that there’s got to be a national reconciliation deal with the Taliban, brokered by Russia-China, with no American interference, including the end of the opium-heroin ratline.

Russia-China extract from the Taliban a firm promise that jihadism won’t be allowed to fester. The endgame: loads of productive investment, Afghanistan is incorporated to Belt and Road and – later on – to the Eurasia Economic Union (EAEU).

The SCO’s joint statement on Wednesday will be particularly enlightening, perhaps detailing how the organization plans to coordinate a de facto Afghan peace process farther down the road.

In this scenario, the SCO now has the chance to implement what it has been actively discussing for years: that only an Asian solution to the Afghan drama applies.

Sun Zhuangzhi, executive director of the Chinese Research Center of the SCO, sums it all up: the organization is capable of coming up with a plan mixing political stability, economic and security development and a road map for infrastructure development projects.

The Taliban agree. Spokesman Suhail Shaheen has stressed, “China is a friendly country that we welcome for reconstruction and developing Afghanistan.”

On the Silk Road again

After economic connectivity, another SCO motto encouraged by Beijing since the early 2000s is the necessity to fight the “three evils”: terrorism, separatism and extremism. All SCO members are very much aware of jihadi metastases threatening Central Asia – from ISIS-Khorasan to shady Uighur factions currently fighting in Idlib in Syria, as well as the (fading) Islamic Movement of Uzbekistan (IMU).

The Taliban is a way more complex case. It’s still branded as a terrorist organization by Moscow. Yet on the new, fast-evolving chessboard, both Moscow and Beijing know the importance of engaging the Taliban in high-stakes diplomacy.

Wang Yi has already impressed upon Islamabad – Pakistan is a SCO member – the need to set up a trilateral mechanism, with Beijing and Kabul, to advance a feasible political solution to Afghanistan while managing the security front.

Here, from China’s point of view, it’s all about the multi-layered China-Pakistan Economic Corridor (CPEC), to which Beijing plans to incorporate Kabul. Here is a detailed CPEC progress update.

Building blocks include the deal struck between China Telecom and Afghan Telecom already in 2017 to build a Kashgar-Faizabad fiber optic cable system and then expand it toward a China-Kyrgyzstan-Tajikistan-Afghanistan Silk Road system.

Directly connected is the deal signed in February among Islamabad, Kabul and Tashkent to build a railway that in fact may establish Afghanistan as a key crossroads between Central and South Asia. Call it the SCO corridor.

All of the above was solidified by a crucial trilateral meeting last month among China-Pakistan-Afghanistan Foreign Ministers. Team Ghani in Kabul renewed its interest in being connected to Belt and Road – which translates in practice into an expanded CPEC. The Taliban said exactly the same thing last week.

Wang Yi knows very well that jihadism is bound to target CPEC. Not Afghanistan’s Taliban, though. And not the Pakistani Taliban (TTP), as quite a few CPEC projects (fiber optics, for instance) will improve infrastructure in Peshawar and environs.

Afghanistan in trade connectivity with CPEC and a key node of the New Silk Roads could not make more sense – even historically, as Afghanistan was always embedded in the ancient Silk Roads. Crossroads Afghanistan is the missing link in the connectivity equation between China and Central Asia. The devil, of course, will be in the details.

Then, to the West, there’s the Iranian equation. The recently solidified Iran-China strategic partnership may eventually lead to closer integration, with CPEC expanded to Afghanistan. The Taliban are keenly aware of it. As part of their current diplomatic offensive, they have been to Tehran and made all the right noises towards a political solution.

Tehran – an observer at the SCO and on the way to becoming a full member – is actively talking to all Afghan actors. No fewer than four delegations were visiting last week. The head of Kabul’s team was former Afghan Vice President Yunus Qanooni (a former warlord, as well), while the Taliban were led by Sher Mohammad Abbas Stanikzai, who commands their political office in Doha. This all implies serious business.

There are already 780,000 registered Afghan refugees in Iran, living in refugee villages along the border and not allowed to settle in major cities. But there are also at least 2.5 million illegals. No wonder Tehran needs to pay attention. Zarif once again is in total synch with Lavrov – and with Wang Yi, for that matter: a non-stop war of attrition between the Kabul government and the Taliban could lead only to “unfavorable” consequences.

The question, for Tehran, revolves around the ideal framework for negotiations. That would point to the SCO. After all, Iran has not participated in the snail-paced Doha mechanism for over two years now.

A debate is raging in Tehran on how to deal practically with the new Afghan equation. As I saw for myself in Mashhad less than three years ago, migration from Afghanistan – this time from skilled workers fleeing the Taliban advance – may actually help the Iranian economy.

The director general of the West Asia desk at Iran’s Foreign Ministry, Rasoul Mousavi, goes straight to the point:  “The Taliban yield” to the Afghan people. “They are not separated from Afghanistan’s traditional society, and they have always been part of it. Moreover, they have military power.”

On the ground in western Afghanistan, in Herat – linked by a very busy highway corridor across the border to Mashhad – things are more complicated. The Taliban now control most of Herat province, apart from two districts.

Legendary local warlord Ismail Khan, now in his mid-70s, and carrying an overloaded history of fighting the Taliban, has deployed militias to guard the city, the airport and its outskirts.

Yet the Taliban have already vowed, in diplomatic talks with China, Russia and Iran, that they are not planning to “invade” anyone – be it Iran or the Central Asian “stans.” Taliban spokesman Suhail Shaheen has been adamant that cross-border trade in different latitudes, from Islam Quilla (in Iran) to Torghundi (in Turkmenistan) and across northern Tajikistan will “remain open and functional.”

In a fast-evolving situation, the Taliban now control at least half of Afghanistan’s 400 districts and are “contesting” dozens of others. They are policing some key highways (you can’t go on the road from Kabul to Kandahar, for instance, and avoid Taliban checkpoints). They do not hold any major city, yet. At least 15 of 34 regional capitals – including strategic Mazar-i-Sharif – are encircled.

Afghan news media, always very lively, have started to ask some tough questions. Such as: ISIS/Daesh did not exist in Iraq before the 2003 US invasion and occupation. So how come ISIS-Khorasan emerged right under NATO’s noses?

Within the SCO, as diplomats told me, there’s ample suspicion that the US deep state agenda is to fuel the flames of imminent civil war in Afghanistan and then extend it to the Central Asian “stans,” complete with shady jihadi commandos mixed with Uighurs also destabilizing Xinjiang.

This being the case, the non-withdrawal withdrawal – what with all those remaining 18,000 Pentagon contractors/mercenaries, plus special forces and CIA black op types – would be a cover, allowing Washington a new narrative spin: the Kabul government has invited us to fight a “terrorist” re-emergence and prevent a spiral towards civil war.

The protracted endgame would read like win-win hybrid war for the deep state and its NATO arm.

Well, not so fast. The Taliban have warned all the “stans” in no uncertain terms about hosting US military bases. And even Hamid Karzai is on the record: enough with American interference.

All these scenarios will be discussed in detail this Wednesday in Dushanbe. As well as the bright part: the – now very feasible – future incorporation of Afghanistan to the New Silk Roads.

Back to the basics: Afghanistan returns, in style, to the heart of the 21st Century New Great Game.