The former British diplomat, who is going to prison for contempt of court, has published his last blog post until he is free in eight months. 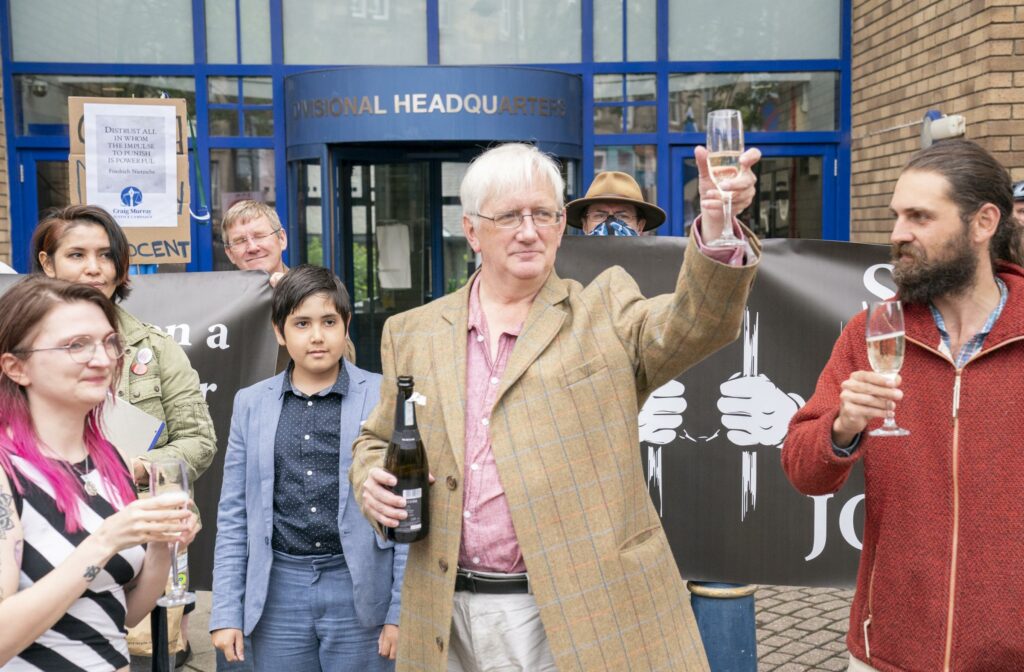 Former ambassador to Uzbekistan Craig Murray drinks champagne with his family before handing himself into St Leonard’s police station.

1 Aug 2021 – I want to make one or two points for you to ponder while I am in jail. This is the last post until about Christmas; we are not legally able to post anything while I am imprisoned. But the Justice for Craig Murray Campaign website is now up and running and will start to have more content shortly. Fora and comments here are planned to stay open.I hope that one possible good effect of my imprisonment might be to coalesce opposition to the imminent abolition of jury trials in sexual assault cases by the Scottish Government, a plan for which Lady Dorrian – who wears far too many hats in all this – is front and centre. We will then have a situation where, as established by my imprisonment, no information at all on the defence case may be published in case it contributes to “jigsaw identification”, and where conviction will rest purely on the view of the judge.

A tearful farewell to Craig Murray with his supporters singing ‘Auld Lang Syne’ as he hands himself in to the police at St Leonards Police Station, Edinburgh to begin his 8 month sentence for reporting on the Alex Salmond case. Journalism under threat in Scotland and the UK. pic.twitter.com/X38Rf8opwA

My point is simply this. You cannot judge the validity of a system simply by high conviction rates. What we want is a system where the innocent are innocent and the guilty found guilty; not where an arbitrary conviction target is met.

The answer to the low conviction rates in sexual assault trials is not simple. Really serious increases in resources for timely collection of evidence, for police training and specialist units, for medical services, for victim support, all have a part to play. But that needs a lot of money and thought. Just abolishing juries and telling judges you want them to convict is of course free, or even a saving.

The right to have the facts judged in serious crime allegations by a jury of our peers is a glory of our civilisation. It is the product of millennia, not lightly to be thrown away and replaced by a huge increase in arbitrary state power. That movement is of course fueled by current fashionable political dogma which is that the victim must always be believed. That claim has morphed from an initial meaning that police and first responders must take accusations seriously, to a dogma that accusation is proof and it is wrong to even question the evidence, which is of course to deny the very possibility of false accusation.

That is precisely the position which Nicola Sturgeon has taken over the Alex Salmond trial; to be accused is to be guilty, irrespective of the defence evidence. That people are oblivious to the dangers of the dogma that there should be no defence against sexual assault allegations, is to me deeply worrying. Sexual allegation is the most common method that states have used to attack dissidents for centuries, worldwide and again especially in authoritarian regimes. Closer to home, think of history stretching from Roger Casement to Assange and Salmond.

Why would we remove the only barrier – a jury of ordinary citizens – that can stop abuse of state power?

I am worried that this abolition of juries will have been enacted by the Scottish Parliament, even before I am out of jail. I am worried Labour and the Lib Dems will support it out of fashionable political correctness. I am worried an important liberty will disappear.

I want to touch on one other aspect of liberty in my own imprisonment that appears not understood, or perhaps simply neglected, because somehow the very notion of liberty is slipping from our political culture. One point that features plainly in the troll talking points to be used against me, recurring continually on social media, is that I was ordered to take down material from my blog and refused.

There is an extremely important point here. I have always instantly complied with any order of a court to remove material. What I have not done is comply with instructions from the Crown or Procurator Fiscal to remove material. Because it is over 330 years since the Crown had the right of censorship in Scotland without the intervention of a judge.

It sickens me that so many Scottish Government backed trolls are tweeting out that I should have obeyed the instructions of the Crown. That Scotland has a governing party which actively supports the right of the Crown to exercise unrestrained censorship is extremely worrying, and I think a sign both of the lack of respect in modern political culture for liberties which were won by people being tortured to death, and of the sheer intellectual paucity of the current governing class.

But then we now learn that Scotland has a government which was prepared not only to be complicit in exempting the Crown from climate change legislation, but also complicit in hushing up the secret arrangement, so I am not surprised.

What is even more terrifying in my case is that the Court explicitly states that I should have followed the directions of the Crown Office in what I did and did not publish, and my failure to not publish as the Crown ordered is an aggravating factor in my sentencing.

If the Crown thinks something I write is in contempt and I think it is not, the Crown and I should stand as equals in court and argue our cases. There should be no presumption I ought to have obeyed the Crown in the first place. That Scottish “justice” has lost sight of this is disastrous, though perhaps as much from stupidity as malice.

My next thought on my trial is to emphasise again the dreadful doctrine Lady Dorrian has now enshrined in law, that bloggers should be held to a different (by implication higher) standard in law than the mainstream media (the judgement uses exactly those terms), because the mainstream media is self-regulated.

This doctrine is used to justify jailing me when mainstream media journalists have not been jailed for media contempt for over half a century, and also to explain why I have been prosecuted where the mainstream media, who were provably responsible for far more jigsaw identification, were not prosecuted.

This is dreadful law, and my entire legal team are frankly astonished that the Supreme Court refused to hear an appeal on this point. This excellent article by Jonathan Cook explains further the chilling implications.

Those articles which the Court ordered me to take down, have been taken down. But I was not ordered to take down this one, which was found not to be in contempt of court. I was also not ordered to take down my affidavits, which though slightly redacted are still extremely valuable. I swore to the truth of every word and I stick by that. At the time I published these, far less was known about the Salmond affair than is known now, and I believe you will find it well worth reading them again in the light of your current state of wider knowledge – absolutely nothing to do with learning identities, but to do with what really happened on the whole plot to destroy Alex Salmond (something the judgement states I am allowed to say).

Finally I urge you to consider this truly remarkable speech from Kenny MacAskill MP. Scotland’s former Justice Secretary, and consider its quite staggering implications. It tells you everything you want to know about the British Establishment’s capture of the Scottish government, that the mainstream media felt no need to report the main points he was making, which constitute a simply astonishing outline of corrupt abuse of power.

An explanation: this blog is going dark because I cannot by law publish from prison or conduct a business from prison. Access to this blog has always been free and open and subscriptions have always been a voluntary contribution and not a purchase. It is understood that all new and continuing subscriptions from today, until we go live again, are voluntary contributions to the welfare of my family and not in exchange for anything.

I am afraid one off contributions to the defence fund are also still urgently needed. Legal costs so far paid amount to over £200,000 and continue to rise as we head towards the European Court of Human Rights in Strasbourg, which has to be via another Scottish Court called the nobile officium. Astonishingly, over 13,000 individuals from over 120 countries have contributed to the legal defence fund. People all over the world value freedom and realise the terrible precedents established by this case must be overturned.

Craig Murray is an author, broadcaster and human rights activist. He was British ambassador to Uzbekistan from August 2002 to October 2004 and rector of the University of Dundee from 2007 to 2010.