A report by health data analytics group, Airfinity, projects “unprecedented” sales and profits for Pfizer and Moderna in 2022. According to the People’s Vaccine Alliance, the companies are pricing their vaccines by as much as $41 billion above the estimated cost of production. 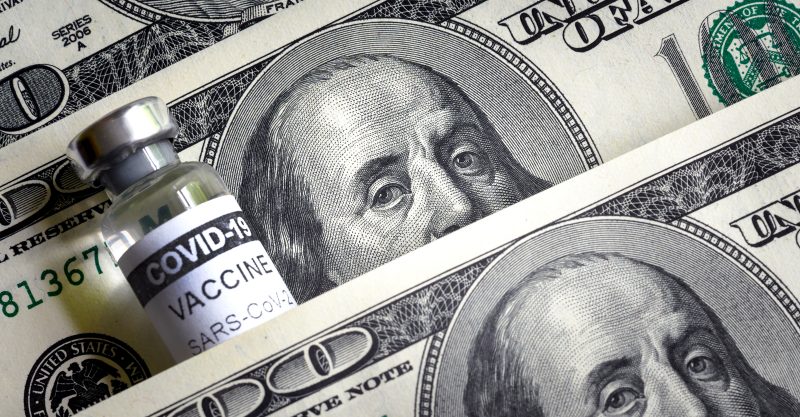 19 Oct 2021 – Vaccine makers Pfizer and Moderna are projected to generate combined sales of $93.2 billion in 2022 nearly twice the amount they’re expected to rake in this year, said Airfinity, a health data analytics group.

Airfinity put total market sales for COVID vaccines in 2022 at $124 billion, according to the Financial Times.

Pfizer vaccine sales are predicted to reach $54.5 billion in 2022, and Moderna’s will hit $38.7 billion. The estimates blow the earlier figures — $23.6 billion for Pfizer and $20 billion for Moderna — out of the water.

Sales of the mRNA shots will continue to rise in 2022 due to boosters and countries stockpiling to ward off variants, Airfinity said.

In April, Pfizer predicted 2021 COVID vaccine sales of $26 billion. After second-quarter results were reported, Pfizer upped the figure to $33.5 billion. Bernstein analyst Ronny Gal said the company could ring up an additional $10 billion in vaccine sales in 2021.

“The numbers are going to be much higher. The guidance of $33.5B reflects contracts signed to today which reflect total commitment to sell 2.1 million doses (at average price of $15.95). Pfizer notes they expect to manufacture 3 million doses. Presumably much of those will be sold as well, albeit at lower average price as consumption shifts to emerging markets. This is probably another $10 billion.”

“The second quarter was remarkable in a number of ways,” Pfizer CEO Albert Bourla said. “Most visibly, the speed and efficiency of our efforts with BioNTech to help vaccinate the world against COVID-19 have been unprecedented, with now more than a billion doses of BNT162b2 having been delivered globally.”

On a conference call, Bourla said that while “it’s very early to speak” about the company’s sales expectations for next year, he put Pfizer’s 2022 production capacity at 4 billion doses.

According to ActionAid International — a global federation working for a world free of poverty and injustice — Moderna, Pfizer and BioNTech are reaping “astronomical and unconscionable profits” due to their monopolies of mRNA COVID vaccines.

Thanks to patent monopolies for COVID vaccines — development of which was supported by $100 billion in public funding from taxpayers in the U.S., Germany and other countries — the three corporations earned more than $26 billion in revenue in the first half of the year, at least two-thirds of it as pure profit for Moderna and BioNTech.

The Alliance also estimated the three corporations are over-charging, pricing their vaccines by as much as $41 billion above the estimated cost of production.

Silverman said pharmaceutical companies are prioritizing their own profits by enforcing their monopolies and selling their  vaccines to the highest bidder. “Enough is enough — we must start putting people before profits,” Silverman said.

According to an analysis by the People’s Vaccine Alliance, based on work by MRNA scientists at Imperial college, Moderna and Pfizer-BioNTech have charged up to 24 times the potential cost of production for their vaccines.

Analysis of production techniques for Pfizer-BioNTech and Moderna, which were developed only thanks to $8.3 billion of public funding, suggest these same vaccines could be made for as little as $1.20 a dose.

Despite benefiting from a multi-billion-dollar public investment in the development of their vaccines, pharma giants have not paid their fair share of taxes, ActionAid International reported.

BioNTech, the German startup that produced the recipe for Pfizer’s vaccine, paid a significantly higher tax rate of 31% in Germany while reaping a 77% profit margin.

Moderna expects total vaccine sales of $20 billion in 2021. So far this year, Moderna has paid only $322 million in taxes, despite earning billions in profit.

Pfizer’s vaccine now accounts for more than a third of the company’s overall revenue base. Pfizer sold more than $11 billion in vaccines in the first half of this year, and is now projecting $33.5 billion in total vaccine sales for 2021 — making the vaccine one of the top selling pharma products this year and potentially in the history of the pharmaceutical industry.

Pfizer has stated its vaccine profit margins are less than 30%, but because the company doesn’t disclose it’s expenses, it was not possible to independently verify its profit margins, ActionAid International reported.

Johnson & Johnson (J&J) said it made $502 million in sales from its COVID vaccine in the third quarter, according to an earnings report released Tuesday.

The company also said it has maintained its vaccine sales outlook for the year, and it plans to ship as much as it can through the rest of the year, CFO Joseph Wolk said on “Squawk Box.”

J&J’s report experienced criticism due to how the company handled the opioid crisis and development of a comparatively less-effective COVID vaccine under outgoing CEO Alex Gorsky.

The FDA panel placed no restrictions on who should receive an additional J&J dose, unlike it did with mRNA vaccines, which are authorized only for use for certain high-risk groups. VRBPAC said the second shot should be given no earlier than two months after the first.