26 Dec 2021 – One of South Africa’s giants in the fight against the apartheid regime in the 20th century, Desmond Tutu remained a critical voice in the country’s politics throughout his life. 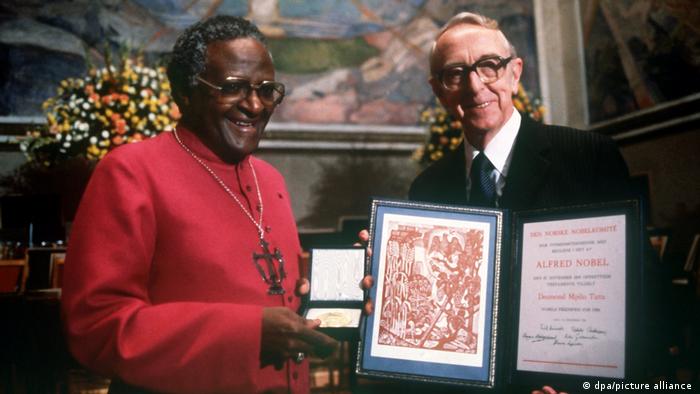 Archbishop Desmond Tutu, who died on Sunday [26 Dec] aged 90, was one of South Africa’s most important Nobel Laureates and a tireless opponent of apartheid.

In April 1993, South Africa was a powder keg. Three years earlier, after decades of oppression of the black population, President Frederik Willem de Klerk had announced reforms. Many political prisoners, among them Nelson Mandela, were released, and their parties and organizations were no longer outlawed. But negotiations on a new democracy had stalled.

Then, a white right-wing radical murdered prominent politician and freedom fighter Chris Hani, pushing the country to the brink of civil war. At Hani’s funeral, which was attended by over 100,000 people, Desmond Tutu defused a tense situation by leading the crowd in a chant: “We will be free! All of us — black and white together!”

It was in these difficult moments in South Africa’s history that Desmond Tutu showed his strength. Throughout his life, he followed his ideals without wavering and fought for the Rainbow Nation — a term for South Africa he coined himself — in the name of peace and nonviolence.

Born in the mining town of Klerksdorp in 1931, Tutu first job was as a teacher, but he quit after the government implemented policies that undermined the education of black students.

Tutu opted for a new career in the church, becoming the first black Anglican bishop of Johannesburg and, later, the Archbishop of Cape Town.

He never stopped fighting for the abolition of racial segregation. He sympathized openly with the goals of Nelson Mandela’s party, the African National Congress (ANC), which wanted to build a democratic South Africa, undivided by race. In 1984, Tutu was awarded the Nobel Peace Prize for his nonviolent efforts against the apartheid regime.

But a different event proved much more important to him: The day in April 1994, when he cast his vote in South Africa’s first free, democratic elections.

“It’s an incredible day for all of our people,” a visibly jubilant Tutu told members of the press outside the polling station. “And I mean all of our people — black and white. Because as of now, we won’t be able to say ‘that illegal regime.’ It will be our government.”

His cheerful, lighthearted nature — which he retained throughout the often frustrating years of the struggle for justice — endeared the archbishop to many South Africans. He had originally planned to retire to the US after the election to spend more time with his grandchildren there. But after President Nelson Mandela asked him to head the Truth and Reconciliation Commission, which was set up to come to terms with the crimes of apartheid, he decided to stay. 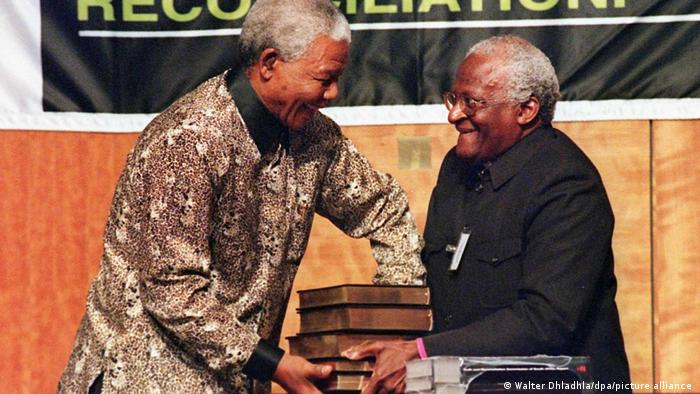 Tutu and the commission tried to find a middle ground between victors’ justice and amnesty, appealing for reconciliation and forgiveness. Over the next three years, thousands of victims were given the chance to describe their suffering. Perpetrators asked for forgiveness.

Clad in a purple robe, Tutu often struggled to hold back tears. But he always directed attention away from himself, emphasizing that the focus had to be on the victims.

Once the commission was over, Tutu continued to speak out against injustice in the world, from the war in Iraq, to autocratic regimes. He didn’t spare South Africa’s neighbors. “He is an angry, even embittered little bishop,” Zimbabwe’s longtime ruler Robert Mugabe once said following Tutu’s remarks on his leadership.

The archbishop wasn’t always popular among many in South Africa’s ruling ANC party either — especially when he railed against the government’s relationship with Mugabe, its hesitancy in the fight against AIDS, and what overpaid political elites.

Disillusioned with South African politics, he later said it was no longer a given to vote ANC: “People are asking questions, which is a good thing. That’s what a democracy is.”

In 1997, Desmond Tutu was diagnosed with prostate cancer. Three years later, on his 79th birthday, he officially withdrew from all public duties. In his typical upbeat way, he explained he simply wanted more time to drink rooibos tea with his wife.

But he wouldn’t — or couldn’t — stay completely out of politics. In 2014, he called for a boycott of mining and oil companies. Climate change, he said, should be fought with the same vigor that apartheid was fought in the 1980s. An ardent supporter of gay rights, he said he would rather go to hell than worship a homophobic god.

His daughter Mpho Tutu van Furth married a woman in the Netherlands in December 2015. As a priest in the Anglican Church of South Africa, she was forbidden to continue her duties in the church. Already in failing health, her father attended her second wedding ceremony in South Africa in May 2016, when same-sex marriage was legalized.

In 2020, during the Black Lives Matter protests in the US, Tutu said it was an “inconvenient truth” that the lives of certain groups in society were considered more valuable than those of others. Tutu’s words of caution followed the violent death of African-American George Floyd during a police operation in the US.