How Nonviolent Action Is Protecting the Earth

Nonviolence toward the Earth is neither a lofty dream nor a utopian vision. It is practical, necessary and our only choice. 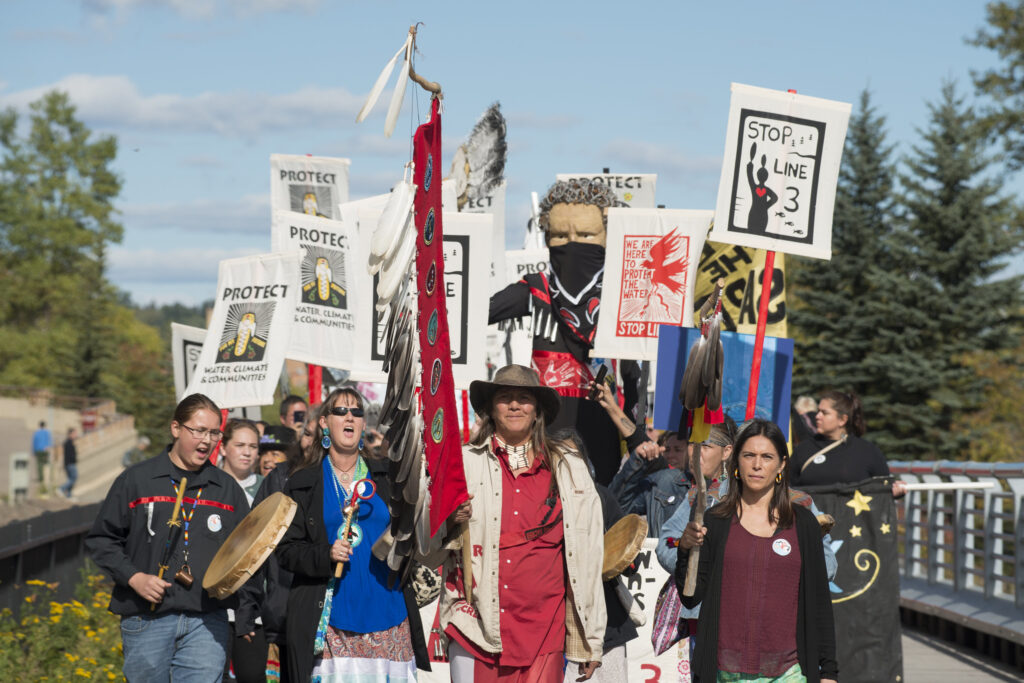 18 Jan 2022 – In our efforts to build a culture of active nonviolence, Pace e Bene/Campaign Nonviolence has always urged people to practice nonviolence toward oneself, all others (including socially, culturally, economically and politically) and toward the Earth.

Violence toward the planet and ecosystems takes uncountable forms: blowing up mountains for coal mines, churning out pollutants and toxins from smokestacks, landfills of plastic and garbage spilling into the Pacific Gyre, clearcutting the rainforest to raise cattle and soybeans, wiping out continent-wide swaths of insects with pesticides and monocrops, oil wells erupting into the oceans, fracking that pumps toxins into aquifers, spewing greenhouse gases into the atmosphere that heat up the planet to devastating levels — to name just a few of our destructive habits.

If we do not change our behavior, our species will not be able to continue on this planet.

In the transition from violence to nonviolence, stopping, blocking and dropping fossil fuel infrastructure projects is critically important. It’s a major form of nonviolent direct action used by climate activists. This past year saw some long-awaited victories, including a blow against tar sands extraction when the Keystone XL Pipeline was cancelled, a Black-led effort to thwart the Byhalia Pipeline, the PennEast Pipeline was ended after a seven-year campaign, and Mi’kmaq First Nation grandmothers stopped the Alton Natural Gas Storage Project. Fracking was banned in the five states of the Delaware River Basin. Los Angeles voted to shut down its 1,600 oil and gas wells. Quebec banned all oil and gas extraction in the province. Jordan Cove Energy Project was defeated. Denmark blocked all new oil extraction projects.

When it comes to thwarting fossil fuels (and indeed, defending their long-standing approach of nonviolent relationship with non-human beings), Indigenous Peoples have been at the forefront — and their decades of efforts have added up impressively. A new report shows that Indigenous-led campaigns have been responsible for stopping and stalling 3 billion tons of greenhouse gas emissions — the equivalent of 25% of the U.S. and Canada’s annual emissions.

In another arena of climate action, divestment campaigns have been picking up steam, making the point that it’s immoral (and counterproductive) to profit from violence toward the planet. A new report shows that divestment campaigns have shifted $40 trillion away from fossil fuels, including major portfolios from Harvard University, New York State Pension Fund, Rutgers University, the state of Maine, University of Minnesota, Europe’s largest pension fund, the Ford Foundation and Boston City Council. Meanwhile, renewable energy use is smashing records and must exponentially grow as we make a rapid climate transition.

But practicing nonviolence toward the Earth doesn’t just mean halting the violent and abusive systems through which we exploit and extract. Nonviolence toward the Earth also describes how we repair the harms we have caused, make space for other species to flourish, clean up our mess, acknowledge the sentience of other beings, and recognize the necessity of health for all parts of the interconnected web with which we are inextricably bound.

To this end, restoration and regeneration are key components of moving into nonviolence with the Earth. One good example is the largest seagrass replanting effort that is bearing fruit in Virginia. It took two decades, 75 million seeds, over 9,000 acres and an army of volunteers, but the ecosystem is flourishing and supporting fish, crustaceans and myriads of other sea creatures. A similar 20-year effort has led to the Atlantic Rainforest offering a bright spot in restoration efforts as the area regrows from clear-cut pastures to full-grown forest. Thanks to some far-ranging, visionary restoration projects and native plant efforts, the Colorado River, famous for no longer reaching the ocean, actually did meet its final destination this year. Dam removals also saw an uptick, with 69 dams demolished on rivers across the United States. Building on a successful program, the U.S. doubled the largest — and healthiest — marine sanctuary in the Gulf of Mexico, expanding protections for thousands of sea creatures.

Nonviolence toward the Earth also describes how we repair the harms we have caused.

Addressing the dire need for homo sapiens to rethink its relationship with other animal species, the United Kingdom passed bold new laws for the protection of pets and farm animals, and also recognized the sentience of octopi, squid and lobsters. After years of pressure from animal rights activists, the Islamabad Zoo is closing down and transforming into an animal conservation sanctuary. Kazakhstan bolstered protections for rare animals in an effort to cut down on poaching and trafficking. (Kazakhstan also celebrated rebounding populations of endangered saiga antelope herds.) In Nepal, thanks to the human practices of conservation, community and collaboration, the rhino population is climbing. In Finland, where reindeer are a leading cause of death for motorists and vice versa, a creative solution is saving both species’ lives: spraying the antlers with reflective paint.

Sometimes, in order to adopt a more nonviolent relationship to other creatures, humans need to engage nonviolent conflict transformation among their own factions — as was the case in Denmark. When the first wolf pack in 200 years re-established its family in the forests, it set off antagonistic conflict between environmentalists and the hunters and farmers who feared the wolves. It took a concerted effort of using “high conflict skills” to de-escalate the situation and protect the wolves. The approach was rooted in nonviolent conflict transformation, showing that navigating our human conflicts is an essential step for rewiring our relationship to other species.

Other examples of how people can practice nonviolence toward the Earth include halting toxic pollution (such as these efforts around chemical dispersants and contamination from jet fuel tanks); banning glyphosate pesticides, halting old-growth and other logging, legally recognizing the Rights of Nature and legal personhood for rivers and other natural systems, legally establishing the causes of the climate crisis as human rights violations, phasing out gas-powered vehicles, redesigning cities for low-traffic and car-free neighborhoods, ending the use of single-use plastics (as Chile, Azerbaijan, Turkey, and Georgia have done), transitioning farmland to organic practices, and much more.

In order to meet the demands of the climate crisis, stories like these need to become the norm, rather than the exception. They serve to show the way forward, however, and to activate our imaginations in the direction of the way of life we must embody. Nonviolence toward the Earth is neither a lofty dream nor a utopian vision. It is practical, necessary and our only choice.