Plus Zelensky on the Frontlines? 27 Feb 2022 – The ongoing geopolitical and military conflict situation between the Russian Federation and the Republic of Ukraine is being used for fake news production by Western press and social media platforms, as is becoming evident.

Biased reports, publications of old photographs, and even simulations and video games serve as “source” for the mainstream media and social media accounts of great influence. With the publication of fake news, they are trying to show an “indignation” against war, something that was never seen against all the atrocities perpetrated or promoted by governments such as that of the United States.

In the case of the conflict in Ukraine, one of the fake news that was dismantled hours after it was broadcast consists of images of bombings and the alleged activation of anti-aircraft defense systems in Ukrainian territory. It was revealed that the bombings were from scenes of a video game called ArmA 3.

Photos, videos and stories abound in social media platforms and other digital platforms, seeking sustenance by appealing to values ​​such as tenderness, patriotism, and courage. For this reason, images associated with fear, love and the fragility of children are being disseminated.

On the other hand, some photographs of the Ukrainian President, Volodymyr Zelensky, dressed in a military uniform, were circulated to claim that he was in “the frontlines of battle in defense of his country.” However, those photographs were revealed to have been published in early December last year.

Ukraine has been at war for eight years, against the People’s Republics of Donetsk and Lugansk in the Donbass region that had seceded from Ukraine after the 2014 coup. Many of the images of that conflict have been manipulated to affirm that all those have been happening since February 24, when Russia’s special military operation began.

Similarly, a photo of Ukrainian boys and girls greeting Ukrainian soldiers was circulated as recent, but was later confirmed to be a photograph of an advertisement of the Ukrainian Ministry of Defense that has been around for several years.

Moreover, photos and videos from other conflicts in other regions, including of wars carried out or promoted by the US in Syria, Libya and Palestine, have been presented as images from the current conflict in Ukraine.

Another such incident was that of a video where a man can be seen crying while saying goodbye to his daughter and wife. The scene was used to dramatize the farewell of a supposedly Ukrainian family, when in reality it was about a Russian man of the Donbass bidding farewell to his family that was being evacuated to Russia at the start of the Ukrainian bombing of the region days before the Russian military moved in.

Zelensky on the frontlines?

A similar incident happened with the Ukranian President Volodymyr Zelensky who in a speech on February 25 announced his pledge to remain in Kiev. Soon after his speech, several images with Zelensky in military uniform went viral in social media platforms, claiming that he was at the frontlines of war. One of the images got more than 33,000 shares on Facebook in just a few hours.

The India Today Anti Fake News War Room (AFWA) found the photos to be old and not related to the ongoing Ukraine-Russia conflict. With the help of a reverse image search, the Indian news outlet found the original image posted on Getty Images. According to the description on Getty Images, the image was from Zelensky’s visit to the front-line positions of the Ukrainian military in Donbass on December 06, 2021. 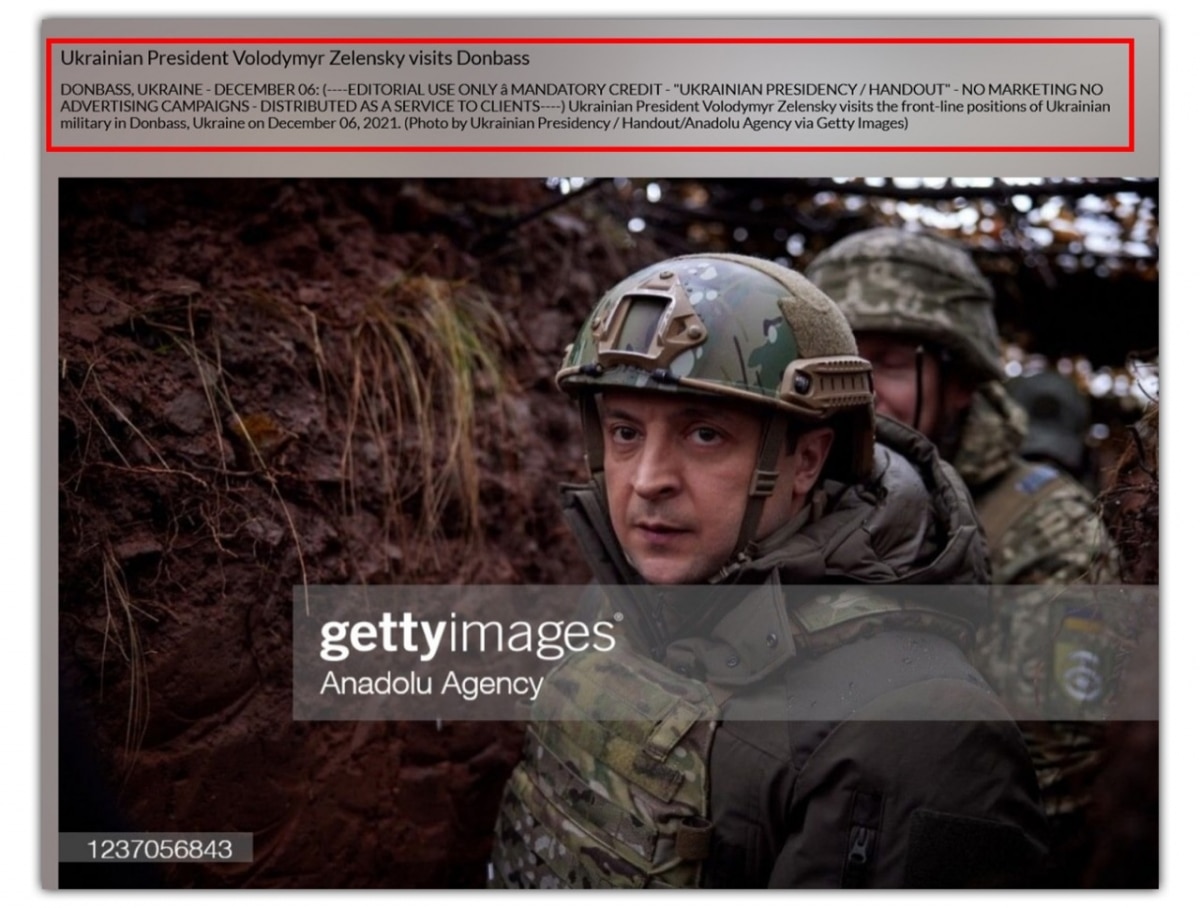