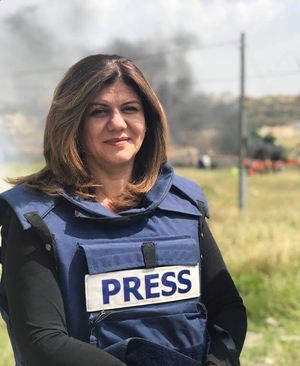 12 May 2022 – Yesterday, Palestinian-American journalist Shireen Abu Akleh was reporting for Al Jazeera on Palestinians living under Israeli occupation, as she had for over 25 years. On that morning, she was covering an Israeli army assault on the Jenin refugee camp in the West Bank. Shireen and another reporter were against a stone wall, wearing blue helmets and blue flak jackets clearly emblazoned with the word “PRESS.” Shireen was killed by a single shot to the head. A videographer immediately turned a camera towards Shireen’s body, slumped forward on the ground. Witnesses said she was killed by Israeli fire, likely a sniper who specifically targeted the space between her protective vest and helmet.

“They shot us for no reason,” Al-Quds reporter Ali al-Samudi said from a hospital in Jenin. He was shot in the back but survived. “We, a group of journalists, were there wearing our full press uniforms…We were obvious.” Israel first blamed Palestinians for the shooting, then later admitted its own soldiers might have been responsible.

Shireen was a beloved journalist, known throughout the Arabic-speaking world for her decades of tireless reporting on Palestine. As news of her death spread, crowds turned out in a spontaneous outpouring of anger and grief. People gathered outside her home in the Beit Hanina neighborhood of occupied East Jerusalem. Israeli soldiers then raided the home in an act both pointless and cruel. In Gaza City, mourners gathered and lit candles amidst the rubble of what was the al-Jalaa tower. The eleven-story building housed Al Jazeera and The Associated Press until a year ago, when an Israeli missile leveled it.

“Shireen was very brave. She was a kind reporter. She had an infectious laugh,” journalist Dalia Hatuqa, a close friend of Shireen, said on the Democracy Now! news hour, not long after her friend’s death. “She gave voice to the struggles of Palestinians. During the height of the Intifada, she became a mainstay in every Palestinian home…I recall Israeli soldiers going around Ramallah and mimicking her, shouting from their bullhorn her famous closing line, ‘Shireen Abu Akleh, Al Jazeera, Ramallah.’”

Shireen Abu Akleh is only the latest journalist killed while reporting on Israel’s occupation of Palestine. The Palestinian News and Information Agency lists 86 journalists killed by Israel, from 1972 to the present. In late April, the International Federation of Journalists and the Palestinian Journalists’ Syndicate filed a complaint with the International Criminal Court, alleging Israeli war crimes against journalists. They will add Shireen’s death to the complaint.

“Attacks on journalists in order to squelch the story at the root are a part of colonial information control. The British Empire did this everywhere in Ireland, in India, in Egypt and Palestine,” Columbia University history professor Rashid Khalidi said on Democracy Now! “The Israelis have been doing it systematically and very effectively, shooting at journalists, intimidating journalists on the ground in Palestine, and then bullying editors and producers here in New York and in the United States…They make stuff up to prevent the truth, which is that this is a brutal occupation that’s only sustained by brute force against the will of an entire people. It’s supported by us, the United States, these are American weapons being used. This is American money that supporting this. It’s essential for the Israelis to blur, to occlude, to hide.”

Shireen Abu Akleh was given a state funeral in Ramallah. Her image was projected on walls across the city. Two photos circulated on social media, one showing Al Jazeera Jerusalem Bureau Chief Walid al-Omari introducing Shireen on camera as a young reporter in 1997, and the other taken this week, with Walid holding up her blood-soaked vest after her death.

Last year Shireen recounted her experiences at Al Jazeera in a short video. She said,

“I’ll never forget the amount of destruction or the feeling that death was so close to us.
We would barely see our homes, we would carry our cameras and move across the military checkpoints and uneven roads. We would spend our nights in hospitals or with people we did not know and despite the dangers and the threats, we were keen to continue our job.”

“All that was in 2002 when the West Bank was stormed by the Israelis in a way that was not seen since 1967. In the difficult moments I overcame my fear because I chose journalism to be close to the people. It might not be easy for me to change the reality but at least I was able to convey the people’s message and voice to the world.”

“I am Shireen Abu Akleh.”

The killing of journalists and media workers the world over – from Palestine to Mexico to Ukraine – all too often with absolute impunity, must end.