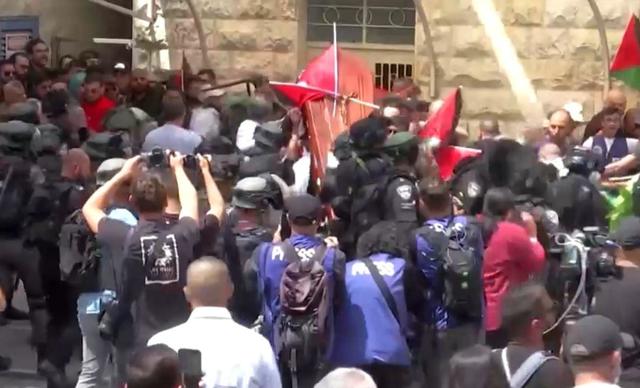 13 May 2022 – Israeli forces have attacked a funeral procession for a Palestinian American journalist shot dead this week, kicking and hitting people with batons and causing mourners carrying her coffin to lose balance and drop it to the ground.

Palestinian flags – which are rarely seen – were openly waved by many of the thousands of people who circumvented roadblocks in occupied East Jerusalem to join the funeral procession on Friday for Al Jazeera reporter Shireen Abu Aqleh. Mourners sang the Palestinian national anthem and chanted “Palestine! Palestine!”.

Police said mourners were “disrupting public order”. Footage showed the coffin on mourners’ shoulders outside St Joseph’s hospital in East Jerusalem as police rushed in and attacked people. The sound of a stun grenade could be heard and the windows of the hearse were smashed in.

Israel forbids public displays of Palestinian flags and often prevents people from hoisting them at rallies and protests in the city.

Rima Baqleh, a Palestinian sociologist from Jerusalem who attended the same church as Abu Aqleh, said: “This is unacceptable to attack her coffin and to disrespect the funeral. Shireen had covered the story of Palestine since she was a girl and she wanted always for Jerusalem to be liberated. I think today Shireen managed to liberate Jerusalem – to carry the Palestinian flag in the hands of thousands of people down the road to her burial.”

The EU said it was appalled by the “unnecessary” force used by the Israeli police, while the White House described footage of the scene as “deeply disturbing”.

“EU and likeminded partners attended the funeral of Shireen Abu Akleh in occupied East Jerusalem. Appalled by the violence in the St Joseph hospital compound and the level of unnecessary force exercised by Israeli police throughout the funeral procession,” the EU said in a tweet. Police said they had held talks with Abu Aqleh’s family in order to “enable a respectable funeral”. They added: “Unfortunately, under the auspices of the funeral and taking cynical advantage of it, hundreds of people began disrupting public order before [the funeral] even began. As the coffin was about to exit the hospital, stones began to be thrown at officers from the hospital’s plaza, and the officers were forced to use riot dispersal means.”

They released a video in which an officer outside the hospital grounds is seen addressing the crowd. “If you don’t stop these chants and [Palestinian] nationalistic songs we will have to disperse you using force and we won’t let the funeral take place,” the officer says.

The police presence was heavy throughout the day, with roadblocks set up on the roads from Palestinian neighbourhoods and entrance denied at some points in the Old City, including to accredited journalists. About 150 police were stationed around St Joseph’s hospital, including horse-mounted units.

Abu Aqleh’s coffin left the hospital grounds by vehicle and arrived at a Jerusalem church inside the Old City for her funeral.

Abu Aqleh’s brother Anton remained with her body throughout the day, encouraging others to ensure she was buried peacefully and without delay. He held her coffin as it was carried from the church to the nearby Christian cemetery in Mount Zion, trailed by a press vest laid on an orange stretcher.

The crowd of Christian and Muslim Palestinian mourners sang pro-Palestine chants but there was little presence of any political factions.

“It is a sad day not only for me but for all the Palestinian people all over the country. She lived with us through her presence on TV, she was one of our family,” said Aaya Odeh, a 26-year-old lawyer who had travelled from Nazareth, 90 miles from Jerusalem. “I felt that I am losing my mother, I grew up watching her on TV. The one who killed her should be punished and should be brought to justice. The Israelis are undermining Palestinian people and they have no value for their souls.”

Abu Aqleh was shot in the head on Wednesday morning in the West Bank city of Jenin during what her colleagues at the scene said was a burst of Israeli fire on a small group of journalists covering an expected Israeli military raid.

The Israeli military said its troops shot back after coming under “massive fire” in Jenin and that “there is a possibility, now being looked into, that reporters were hit – possibly by shots fired by Palestinian gunmen”.

However, the Israeli military chief, Lt Gen Aviv Kochavi, later appeared to back away from those assertions, saying: “At this stage we cannot determine by whose fire she was harmed and we regret her death.”

Video of the incident showed Abu Aqleh was wearing a helmet and body armour clearly marked “press”. Ali Samodi, a producer for Al Jazeera who was shot in the back, told the Guardian from his hospital bed that contrary to claims made by Israeli officials, there were no gunmen standing near the journalists when they were targeted.

Agence France-Presse contributed to this report.