The Shameful UN ‘List of Shame’: Equating the Israeli Perpetrator and the Palestinian Victim 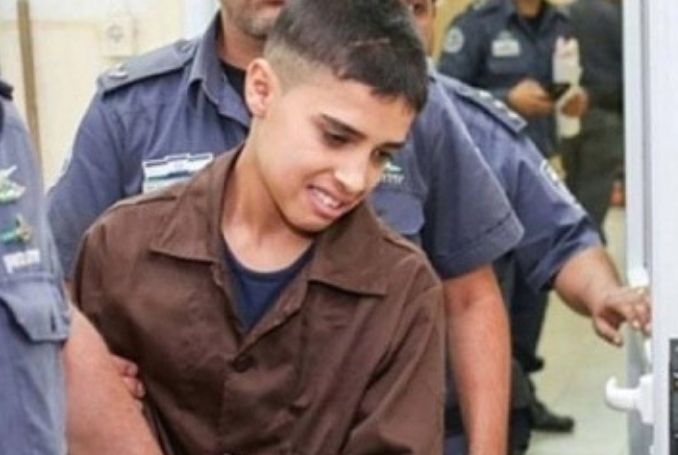 Ahmad Manasra was tried and indicted in Israeli military court when he was 13 years old. (Photo: File)

21 Jul 2022 – “We regret we failed to protect you.” This was part of a statement issued by United Nations human rights experts on 14 July, urging the Israeli government to release Palestinian prisoner Ahmad Manasra. Only 14 years old at the time of his arrest and torture by Israeli forces, Manasra is now 20 years old. His case is a representation of Israel’s overall inhumane treatment of Palestinian children.

The experts’ statement was forceful and heartfelt. It accused Israel of depriving young Manasra “of his childhood, family environment, protection and all the rights he should have been guaranteed as a child.” It referred to the case as ‘haunting’, considering Manasra’s “deteriorating mental conditions”. The statement went further, declaring that “this case … is a stain on all of us as part of the international human rights community”.

Condemning Israel for its ill-treatment of Palestinian children, whether those under siege in war-stricken Gaza, or under military occupation and apartheid in the rest of the occupied territories in the West Bank and East Jerusalem, is commonplace.

Yet, somehow, Israel was still spared a spot on the unflattering list, issued annually by the United Nations Secretary-General, naming and shaming governments and groups that commit grave violations against children and minors anywhere in the world.

Oddly, the report does recognize Israel’s horrific record of violating children’s rights in Palestine. It details some of these violations, which UN workers have directly verified. This includes “2,934 grave violations against 1,208 Palestinian children” in the year 2021 alone. However, the report equates between Israel’s record, one of the most dismal in the world, and that of Palestinians, namely the fact that 9 Israeli children were impacted by Palestinian violence in that whole year.

Though the deliberate harming of a single child is regrettable regardless of the circumstances or the perpetrator, it is mind-boggling that the UN Secretary-General Antonio Guterres found it appropriate to equate the systematic violations carried out by the Israeli military as a matter of course and the 9 Israeli minors harmed by Palestinian armed groups, whether intentionally or not.

To deal with the obvious discrepancy between Palestinian and Israeli child victims, the UN report lumped together all categories to distract from the identity of the perpetrator, thus lessening the focus on the Israeli crimes. For example, the report states that a total of 88 children were killed throughout Palestine, of whom 69 were killed in Gaza and 17 in the West Bank and East Jerusalem. However, the report breaks down these murders in such a way that conflates Palestinian and Israeli children as if purposely trying to confuse the reader. When read carefully, one discovers that all of these killings were carried out by Israeli forces, except for two.

More, the report uses the same logic to break down the number of children maimed in the conflict, though of the 1,128 maimed children, only 7 were Israelis. Of the remainder, 661 were maimed in Gaza and 464 in the West Bank, including East Jerusalem.

The report goes on to blame “armed Palestinian groups” for some of the Palestinian casualties, who were allegedly injured as a result of “accidents involving children who were near to military training exercises”. Assuming that this is the case, accidents of this nature cannot be considered “grave violations” as they are, by the UN’s own definition, accidental.

The confusing breakdown of these numbers, however, was itself not accidental, as it allowed Guterres the space to declare that “should the situation repeat itself in 2022, without meaningful improvement, Israel should be listed.”

Worse, Guterres’ report went further to reassure the Israelis that they are on the right track by stating that “so far this year, we have not witnessed a similar number of violations”, as if to suggest that the right-wing Israeli government of Naftali Bennett and Yair Lapid has purposely changed its policies regarding the targeting of Palestinian children. Of course, there is no evidence of this whatsoever.

On June 27, Defence for Children International-Palestine (DCIP) reported that Israel “had been intensifying its aggression” against children in the West Bank and East Jerusalem since the beginning of 2022. DCIP confirmed that as many as 15 Palestinian children were killed by Israeli forces in the first six months of 2022, almost the same number killed in the same regions throughout the entirety of the previous year. This number includes 5 children in the occupied city of Jenin alone. Israel even targeted journalists who attempted to report on these violations, including Palestinian journalist Shireen Abu Akleh, who was killed on May 11, and Ali Samoudi, who was shot in the back on the very same day.

Much more can be said, of course, about the besiegement of hundreds of thousands of children in the Gaza Strip, known as the ‘world’s largest open-air prison’, and many more in the occupied West Bank. The lack of basic human rights, including life-saving medicine and, in the case of Gaza, clean water, hardly suggests any measurable improvement in Israel’s track record as far as Palestinian children’s rights are concerned.

If you think that the UN report is a step in the right direction, think again. 2014 was one of the most tragic years for Palestinian children where, according to a previous UN report, 557 children were killed and 4,249 were injured, the vast majority of whom were targeted during the Israeli war on Gaza. Human Rights Watch stated that the number of killed Palestinians “was the third-highest in the world that year”. Still, Israel was not blacklisted on the UN ‘List of Shame’. The clear message here is that Israel may target Palestinian children as it pleases, as there will be no legal, political or moral accountability for its actions.

This is not what Palestinians are expecting from the United Nations, an organization that supposedly exists to end armed conflicts and bring about peace and security for all. For now, the message emanating from the world’s largest international institution to Manasra and the rest of Palestine’s children will remain unchanged: “We regret we failed to protect you.”