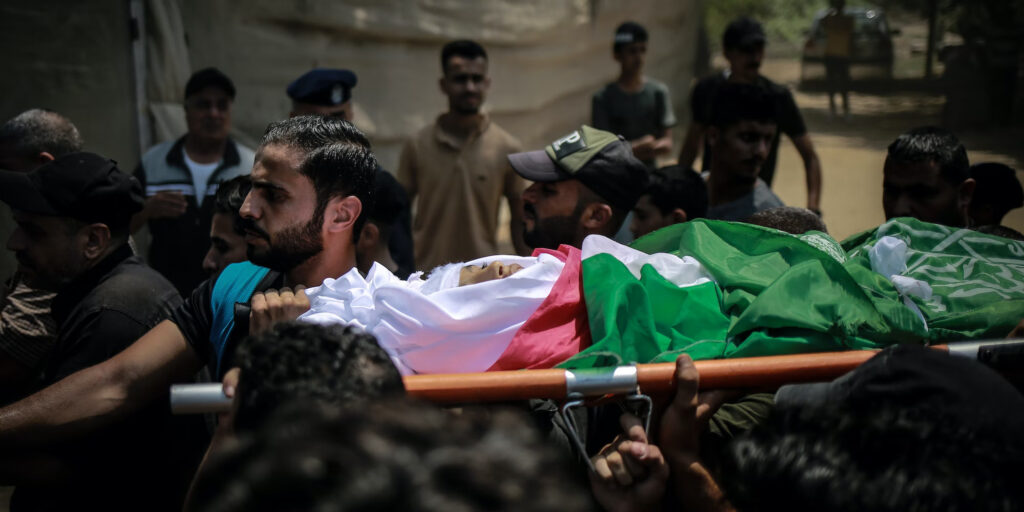 A child killed in the Israeli bombing of Gaza is carried during the funeral in Gaza City on Aug. 8, 2022.
Photo: Hosam Salem

By shying away from graphic images of death, news organizations sanitize the violence of Israeli aggression against Palestinians.

This article includes graphic images and depictions of death.

10 Aug 2022 – When a ceasefire on Sunday [7 Aug] night ended a three-day Israeli offensive in the Gaza strip, over 350 Palestinians were wounded and 46 were dead, including 16 children, according to Palestinian officials. Media coverage in the U.S. was mainly led by photographs of smoke-filled skies or Gazans walking amid piles of rubble. While the photos were accurate and recent, the safety of selecting these images, rather than graphic ones, effectively portrayed a reality for American audiences far removed from what had truly unfolded on the ground.

To look at the totality of images that are made during a news event is an experience most Americans, with the exception of photo editors in newsrooms, rarely experience. As the Palestinian death toll climbed over the weekend, images from photojournalists based in Gaza poured into massive databases like Getty Images and AP Images. A quick search for “Gaza” on Getty Images, for example, returns hundreds of recent photographs, a near-endless grid of brutality from the last week.

In many images, children killed by Israeli bombs are displayed prominently. These images show funerals, the faces of the deceased uncovered, their bodies held aloft and marched through the streets. In some photographs, mourners are seen taking their own images of the bodies on their cellphones — proof of what horrors have occurred. Mourners carry the body of Palestinian Khalil Abu Hamadeh at his funeral ceremony at Jabalia camp in the northern Gaza Strip on Aug. 7, 2022.

These graphic images are arrayed, on photo databases, next to the nongraphic images that are almost always selected for publication by U.S. news organizations: Rockets flying through the sky at night, quiet moments of children surveying the damage done to their homes, and black smoke rising over the horizon. 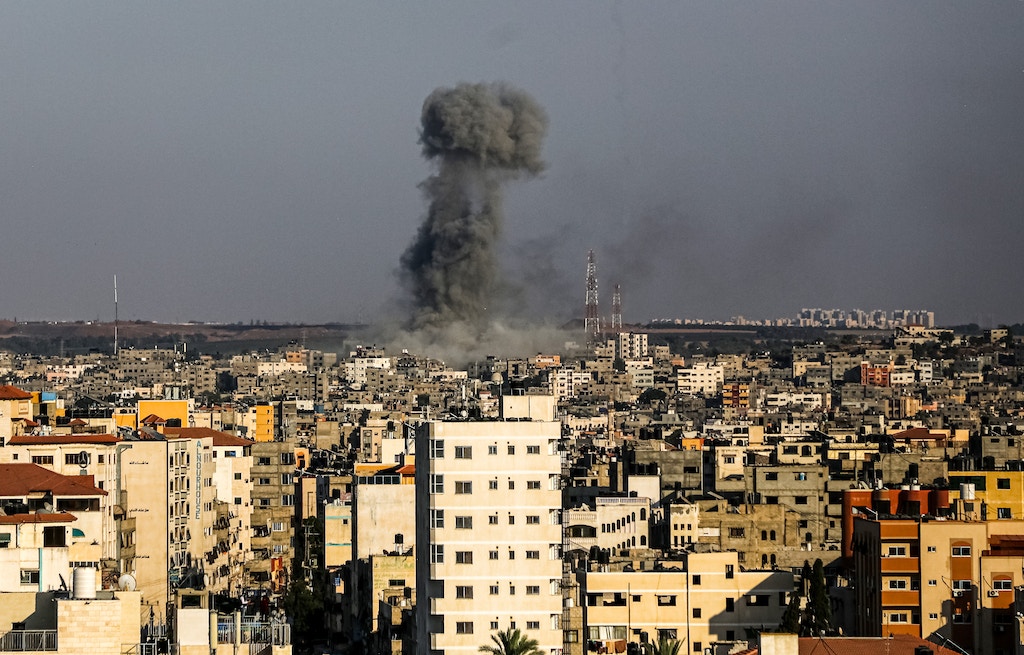 Smoke rises above the site of an Israeli airstrike in Gaza City on Aug. 7, 2022.

In Gaza, photojournalists routinely photograph within hospitals and morgues. This access to urgent care facilities, rare in the United States, provides an opportunity for journalists to directly document the wounded and dead. On Getty Images, images of children’s bodies, wrapped in white fabric, piling up at the morgue are abundant and uncensored. While shocking and deeply upsetting, they do show very clearly what bombing dense residential areas produces.

“I can still see the grieving people weeping after their homes were destroyed,” Palestinian photojournalist Hosam Salem told The Intercept. “I can’t handle it anymore. Even after these three days of Israeli attacks are over, I have become more drained than before. In Gaza, there are no stories that can give us life; all we can say is how death has taken our lives and the lives of those around us.” 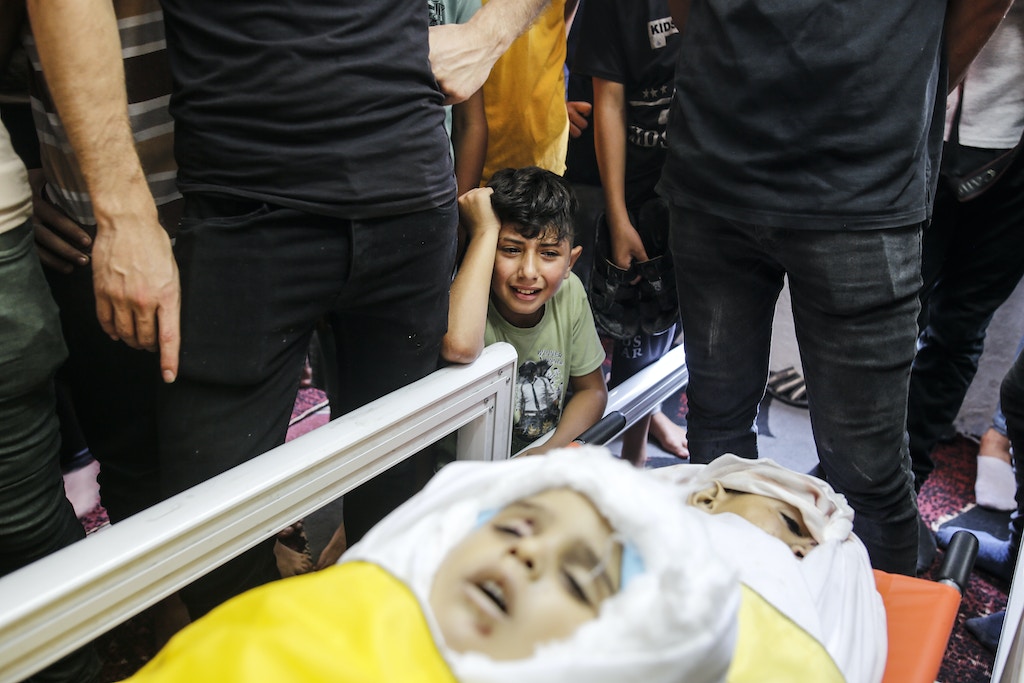 A Palestinian boy weeps next to the bodies of four Palestinian cousins killed by an Israeli airstrike in Gaza Strip, on Aug. 8, 2022. Photo: Sameh Rahmi/NurPhoto via Getty Images

Yet these images are not the defining feature of the unequal conflict in which no Israelis were killed. Instead, they are rarely published at all.

“In general, the majority of coverage by international and American media is weak and often does not show scenes where innocent women and children were killed,” Soliman Hijjy, a Palestinian visual journalist working in Gaza, told The Intercept.

In the case of one of the 16 children killed, 5-year-old Alaa Qaddoum, one report, in the New York Times, included a photograph made after her death. This was the exception, though the photo was not featured prominently; it was placed near the end of the article. Other outlets, from the Washington Post to NBC News, did not publish the image, even as they mentioned the girl’s killing. What we are left with is, in essence, a sanitized and avoidant understanding of world events as newsrooms uniformly opt for images that do not include any graphic content. Social media platforms, like Twitter and Facebook, have enforced this shift away from publishing depictions of violence by implementing “sensitive media” policies that discourage newsrooms from prominently displaying images of atrocities — lest they lose page views. The body of 5-year-old Alaa Qaddoum, after she was killed in an Israeli airstrike on Aug. 5, 2022, in Gaza City. Photo: Hosam Salem

There is no consensus on how to deal with images of intense violence. Individual newsrooms make decisions on a case-by-case basis, often after sorting through troves of images filed to major distribution platforms where none of the images are blurred or censored. On Getty Images, only within the caption information is there sometimes an “editor’s note” warning the viewer about what they’re already looking at: “Image depicts death.” Most media outlets, including this one, issue an editor’s note or content warning before surprising viewers with depictions of graphic violence.

It is not just Palestinian bodies that are erased from mass media accounts of massacres; school shootings in America have become visually defined by makeshift memorials and candlelit vigils rather than graphic images, and the same is true for the bloodshed that occurs overseas. But there are exceptions. When Russia attacked Ukraine earlier this year, visual documentation of Russian atrocities began to dominate the news cycle. The crimes by Russia were so shocking that, in a rare move, the New York Times printed an especially graphic image by photojournalist Lynsey Addario on its front page. Addario called the paper “brave” for publishing her evidence of war crimes.

Critics have noted a stark contrast in global interest in the suffering of the Ukrainian people as opposed to the suffering of others, as well as the ways in which the Russian invasion was covered, factually, as an unprovoked act of aggression, rather than a more generic “conflict” — the kind of framing used for not just Israeli attacks on Palestine, but in other war zones too. This week, for instance, there were more “graphic” images in the Washington Post depicting a massacre that took place earlier this year in Bucha, Ukraine, than were published of the dead in Gaza over the weekend. 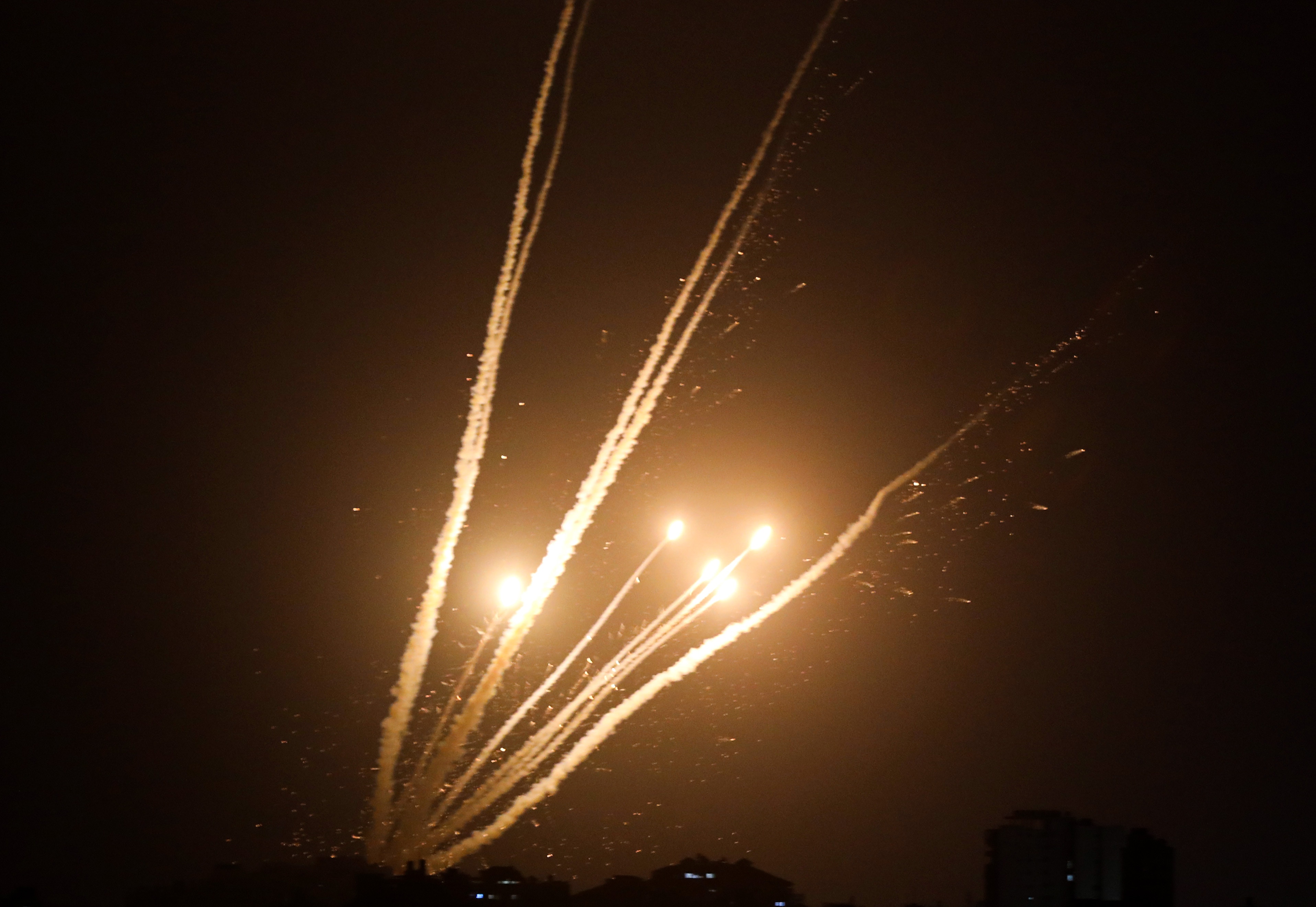 Rockets fired from Gaza City toward Israel, in response to Israeli airstrikes on the Gaza Strip are seen on Aug. 7, 2022. Photo: Yousef Masoud/SOPA Images/LightRocket via Getty Images

The problem with the representation of Palestinian life and death goes well beyond the images selected to tell the story. Palestinians — and many foreign observers — have long condemned the international media for sanitizing Israeli crimes and deferring to Israel’s narrative. In a letter signed by more than 500 journalists following yet another Israeli bombing campaign on Gaza last year, the authors (including several Intercept reporters) argued that coverage of Israel and Palestine regularly amounts to “journalistic malpractice.”

“The asymmetry in context does not just extend to the language we use; stories tend to disproportionately amplify Israeli narratives while suppressing Palestinian ones,” the group wrote. “Obfuscating Israel’s oppression of Palestinians fails this industry’s own objectivity standards.”

“We don’t want anything more than for people to know the facts. We don’t have a complicated narrative.”

Ahmed Abu Artemah — a Palestinian writer and human rights activist who in 2018 was one of the organizers of the “Great March of Return,” a peaceful protest movement by the fence separating Israel from Gaza — told The Intercept that Israel operated on the assumption that they would have an ally in most of the international media.

“This is complicity,” Abu Artemah said. “We don’t want anything more than for people to know the facts. We don’t have a complicated narrative. Our demand is only that people watch the facts, watch the reality, see the footage of what’s happening.” A man kisses the face of a child killed by Israeli airstrikes, during a mass funeral in Burij on Aug. 8, 2022, in Gaza City. Photo: Mohammed Dahman/Getty Images

Across newsrooms, the safe choices of showing an abstracted violence (calm moments of smoke and rubble) over overt violence (death, injury, or mourning) fall in line with the framework of the coverage itself, which in Gaza’s case regularly downplays the impact of civilians in favor of a narrative about Palestinian militancy — even as the same kind of militancy is depicted as resistance in Ukraine.

Mohammed Mhawesh, an independent Palestinian journalist and researcher based in Gaza, argued in an interview with The Intercept that coverage of the latest Gaza assault, which Israeli officials admitted was “pre-emptive,” focused almost exclusively on Israel’s ostensible justification for the attack rather than its impact. And even though the majority of victims were not engaged in acts of resistance, the portrayal of Palestinian resistance, he added, stands in stark contrast with that of the Ukrainian people.

“For the past months, newspapers and websites and social media have been filled with stories of Ukrainian resistance and heroism, stories about soldiers blowing up bridges to delay the approach of Russian tanks and sacrificing themselves in the process. We have seen civilians attacking armed vehicles with whatever they have, and common people receiving weapons training and digging trenches,” Mhawesh said. “And yet, if any of these stories took place in Palestine rather than Ukraine, they would of course not be perceived as acts of heroism and resistance. They would only be classified and condemned as terror.”

Mhawesh stressed the comparison was not intended to diminish the resistance of the Ukrainian people, but to “uphold the right to resist the occupation and military invasion of any land, by any nation.”