Experts say the recent closure of six Palestinian civil society groups will further block ties to international institutions from which they receive most of their funding. 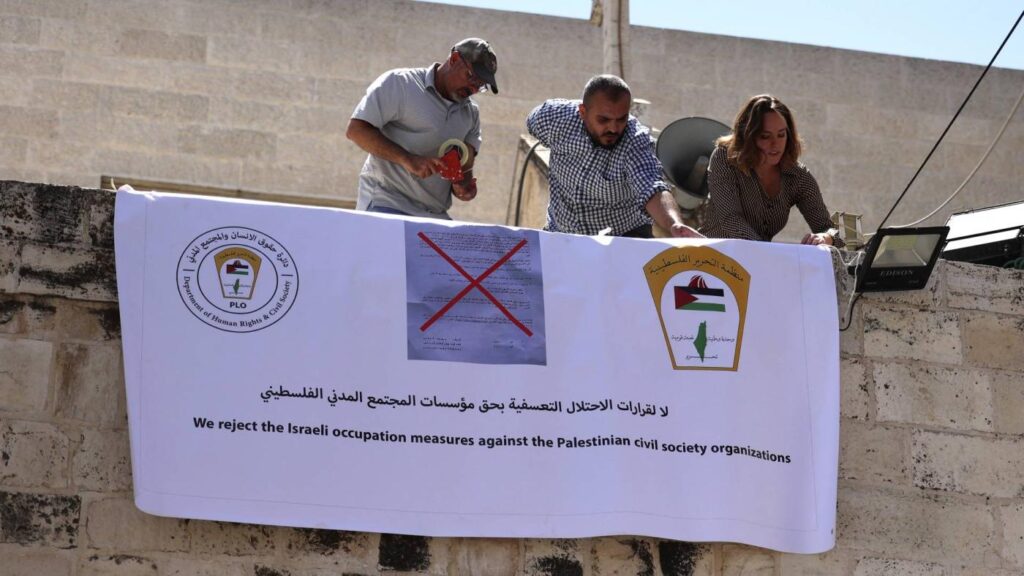 Activists hang a banner outside the Palestinian Al-Haq Foundation in the West Bank city of Ramallah after Israel raided and closed an entrance to their offices, on 18 August 2022 (AFP)

23 Aug 2022 – Israel’s assault on Palestinian civil society, most recently with overnight raids on Palestinian NGOs, has posed serious questions as to what extent these groups will be able to continue operating with the outside world.

So far, European governments, the UN and the US have said they would maintain their relationships with the organisations despite Israel’s moves to outlaw them. However, experts say that as long as Israel is able to impede their operations domestically, they soon may have no ability to work with international institutions and could cease to exist altogether.

“The raid and closure of the organisations’ offices and the targeting of the general directors already makes it harder for these organisations to normally continue with their work and cooperation with other states and institutions,” attorney Rabea Eghbariah of Adalah, the Legal Center for Arab Minority Rights in Israel, told Middle East Eye.

For months, Israel has been working to outlaw these groups. In October, Israel declared all of the groups, except UHWC, “terrorist groups” – a claim repeatedly denied by the NGOs.

Israel then delivered classified intelligence dossiers to Europe and the US, explaining the claims that the groups had ties to the Popular Front for the Liberation of Palestine (PFLP), a leftist political party with a paramilitary branch.

So far, the European Union has rejected Israel’s actions, saying in a nine-member joint statement that they would “continue to stand by international law and support [civil society organisations] that have a role to play in promoting international law, human rights, and democratic values”.

The United Nations also condemned Israel’s move, with UN experts calling on the international community to continue, and even increase, its funding of the groups.

Eghbariah added that while Israel’s designation does not have any international jurisdiction – and so far no other country has followed Israel’s lead – the terror labelling may still “expose third parties to liability under Israeli law and deter international actors from cooperating with, platforming or funding these institutions”.

The attorney for Adalah, which is representing the six organisations, added that the issuance of travel bans, prison sentences, and the seizure of funding all are real and tangible obstacles that could impede the groups’ work at home and abroad.

Travel bans have already been used against the directors of two organisations – Sahar Francis of Addameer and Ubai Aboudi of Bisan – when they were refused entry to the US. Meanwhile, Khaled Quzmar, general director of DCI-Palestine, was arrested by Israel over the weekend.

Civil society organisations, a key pillar in the social and economic development of Palestinians living in territories occupied since 1967, obtain most of their funding from donor states abroad.

So when Israel moved to label the groups as “terrorists”, many experts saw it as a plan to cut off their international funding streams.

“Most people looked at these designations when they first came out 10 months ago and understood this to be an effort to cut off international funding to them. If you cut off international funding to them, they’re no longer able to function,” Lara Friedman, president of the Foundation for Middle East Peace, told Middle East Eye.

The concerns turned into a reality when in May 2021, European donors of two of the groups – Al-Haq and PCHR – halted payments to them after receiving classified Israeli intelligence claiming that the six prominent Palestine-based NGOs were using EU money to fund the PFLP.

In June, following a 13-month suspension of funding, the EU announced it would resume funding after it found “no suspicions of irregularities and/or fraud” and “did not find sufficient ground to open an investigation”.

But even though the donors have recommitted to funding the Palestinian NGOs, Israel’s domestic actions against them may make it difficult for Palestinian civil society to utilise or even obtain the funds they need to operate.

“It does mean that these organisations wouldn’t be able to have bank accounts even in the Palestinian banks,” Adam Shapiro, Director of Advocacy for Israel-Palestine at Democracy for the Arab World Now (Dawn), told Middle East Eye.

“European countries that are funding these organisations have said that they will resume their funding. Now, that in principle, that’s fine,” Shapiro said.

But in practice, it can wreak havoc with the mechanism for funding.

“So even though these European countries might want to continue funding, I think they have to find a way to practically get their money into these organisations.”

On Monday afternoon, 11 advocacy groups led by Dawn sent a joint letter to the Biden administration calling on Washington to demand that Israel reverse its closure of the six Palestinian NGOs.

“The US government’s failure to censure Israel’s human rights violations while continuing to provide it with matchless military and political support is understood as US acquiescence to these actions,” the letter said.

The United States, one of Israel’s closest allies, has met the country’s targeting of the Palestinian groups with a mixed and relatively muted response.

‘How long do you keep this process open before these organisations really can’t function anymore?’
–– Lara Friedman, Foundation for Middle East Peace

In a report by The Guardian on Monday, a CIA assessment “doesn’t say that the groups are guilty of anything”, in response to Israel’s dossier pertaining to the six Palestinian groups’ alleged terror links.

Yet despite this, the US has yet to condemn Israel’s actions against the group or call for a reversal of the terror label.

On Monday, State Department Spokesperson Ned Price declined to comment on the CIA’s reported assessment but said that the US government had analysed Israel’s evidence for the terror charge.

“We have not followed through with any designations, nor have we changed our approach to these organisations,” he said.

“We continue to seek additional information from our Israeli partners.”

Friedman said that by not offering a clear rejection of Israel’s actions, “it’s like being guilty until proven innocent”.

“It’s as if we’re going to basically operate in a space where we’re never going to stand up to Israel on this,” she told MEE.

“How long do you keep this process open before these organisations really can’t function anymore? At which point taking a position is irrelevant.”

Umar Farooq is a journalist based in Washington DC. He writes about social and political issues facing Muslim communities in the US, as well as foreign policy related to the Middle East.