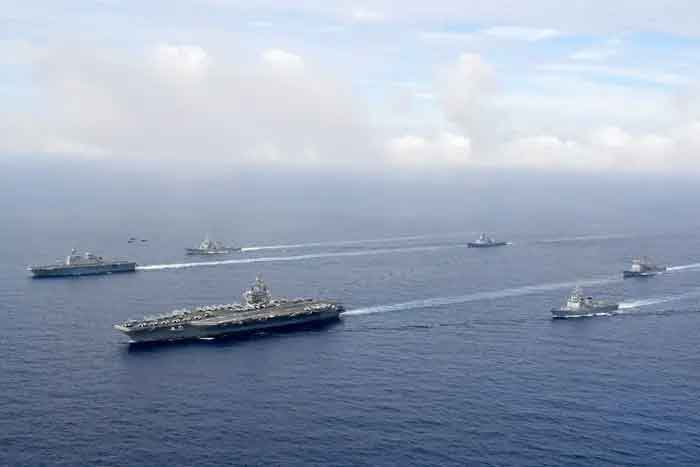 U.S. Navy ships and planes will transit the Taiwan strait in the next two weeks.

5 Aug 2022 – U.S. National Security Council spokesman John Kirby condemned Chinese military drills in the area and said the Pentagon had ordered the aircraft carrier USS Ronald Reagan and her escorts to remain near Taiwan to “monitor the situation.”

The USS Reagan and her accompanying ships are based in Japan and were deployed to the East China Sea in recent days, as House Speaker Nancy Pelosi paid a visit to Taipei against Chinese objections. China has responded to Pelosi’s visit by launching extensive drills around Taiwan and firing a dozen missiles across the island.

According to Kirby, amid heightened tensions, U.S. President Joe Biden decided it would be “prudent” to order the U.S. aircraft carrier strike group to stay in the area “for a little bit longer than they were originally planned.”

The spokesman also condemned the Chinese missile tests as “irresponsible” and “at odds with our longstanding goal of maintaining peace and stability across the Taiwan strait and in the region.”

“We will not be deterred from operating in the seas and skies of the Western Pacific, consistent with international law, as we have for decades, supporting Taiwan and defending a free and open Indo-Pacific,” he said.

As part of that effort, the U.S. will “conduct standard air and maritime transits through the Taiwan strait in the next two weeks,” Kirby added.

Chinese military drills off the coast of Taiwan have prompted the U.S. Air Force to postpone a test of its nuclear deterrent on Thursday.

A Minuteman III intercontinental ballistic missile (ICBM) was scheduled for a test launch from the Vandenberg Air Force Base in California, but was put on hold, reportedly to avoid inflaming tensions with Beijing.

“This is a long-planned test but it is being postponed to remove any misunderstanding given the PRC’s actions around Taiwan,” the official told WSJ, using an acronym for the People’s Republic of China.

Known as “Glory Trip,” the Minuteman III test is conducted every few months to assess the missile’s reliability. Thursday’s test was the second this year to be delayed due to world events.

Another test in early March was postponed to reduce the risk of catastrophic “misinterpretation or miscommunication” with Russia over the ongoing conflict in Ukraine. Moscow had placed its nuclear deterrent on alert over “aggressive statements” by NATO and the U.S.-led alliance’s sanctions war against Russia.

While the March test was eventually cancelled altogether, one US official told the WSJ the August one might be delayed by up to ten days.

The Chinese military has conducted a long-range live fire exercise in the Taiwan Strait and used precision weapons to strike “specific areas” in the eastern part of the waterway, it said on Thursday.

The war games, reported by the Eastern Theater Command of the Chinese People’s Liberation Army, are part of maneuvers launched in zones surrounding the self-governed Chinese island in reaction to a visit by U.S. House Speaker Nancy Pelosi this week.

The military said the exercises “achieved the expected results,” but offered no further details.

Beijing, which warned the U.S. against going through with the trip by the third-ranking U.S. official, earlier announced a series of military exercises in six areas surrounding the island, including the Taiwan Strait, a key maritime traffic route. They are due to run until Sunday. Ships and aircraft have been advised to keep away from the designated training zones.

Chinese media reported that the drills may include firing DF-17 missiles, which are tipped with hypersonic glider warheads, and described them as a demonstration that China could fully blockade Taiwan, if it wished to.

Beijing considers Taiwan to be part of its territory and has declared peaceful reintegration as its strategic goal. The island was the last stronghold of nationalist forces during the 1940s civil war in China, which was won by the Communists.

The U.S. formally acknowledges that only one Chinese nation exists and recognizes the government in Beijing as leading it. However, Washington has maintained informal relations with Taipei even after rapprochement with Beijing in 1979. The Chinese government has accused the US of eroding the status quo with actions such as Pelosi’s visit.

Some airlines have cancelled flights to Taipei and rerouted others using nearby airspace that has been closed to civilian traffic during Chinese military exercises.

The airspace involved is comparatively small, but the disruption is hampering travel between Southeast Asia and Northeast Asia.

Korean Air Lines Co Ltd said it had cancelled flights between Seoul and Taipei on Friday and Saturday, and would delay a flight on Sunday due to the exercises.

Singapore Airlines Ltd said it had cancelled its Friday flights between Singapore and Taipei due to “evolving airspace restrictions” and would continue to monitor the situation in case more adjustments were needed.

Japan’s ANA Holdings Inc and Japan Airlines Co Ltd are still operating flights to Taipei as normal, spokespeople for the airlines said, but are avoiding the affected airspace on those flights, as well as on routes to Hong Kong and Southeast Asia.

Hong Kong’s Cathay Pacific Airways Ltd said on Thursday its flights were avoiding designated airspace zones around Taiwan, in a move that could lead to more flying time for some flights.

Flight tracking service FlightRadar24 showed Taiwanese carriers China Airlines Ltd and EVA Airways Corp were still flying to and from the island as of Friday morning, as was Philippine Airlines and cargo carriers FedEx Corp and United Parcel Service Inc, though avoiding the areas affected by the military drills.

Emirates was still scheduled to fly to Taipei on Friday, according to its website.

Taiwan, along with mainland China and Hong Kong, is one of the few places in the world that still requires quarantine for arrivals because of COVID-19, triggering reduced demand for travel to the island that means there are far fewer flights than before the pandemic.

The airspace involved is minor in its impact on the global aviation industry compared to the decision by most airlines to bypass overflight of other places like Russia, Ukraine, Afghanistan, North Korea, Iraq and Syria.

The avoidance of Russian airspace, for example, has led to a near four-hour increase in flight times between Finland and Japan.

Taiwan said on Wednesday it was negotiating with neighboring Japan and the Philippines to find alternative aviation routes, the official Central News Agency (CNA) reported.