Europe, More Than Putin, Must Shoulder the Blame for the Energy Crisis

14 Sep 2022 – The same arrogant, self-righteous posturing from the West that fuelled the Ukraine war is now plunging Europe into recession. 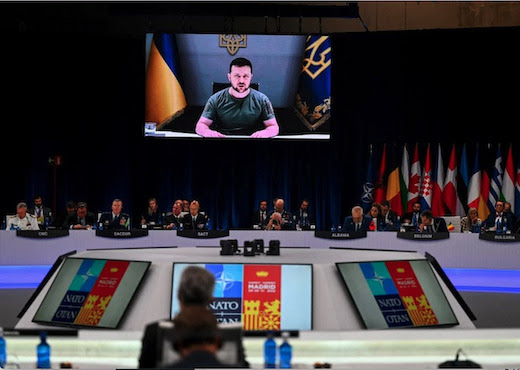 Outraged western leaders are threatening a price cap on imports of Russian natural gas after Moscow cut supplies to Europe this month, deepening an already dire energy and cost-of-living crisis. In response, Russian President Vladimir Putin has warned that Europe will “freeze” this winter unless there is a change of tack.

In this back-and-forth, the West keeps stepping up the rhetoric. Putin is accused of using a mix of blackmail and economic terror against Europe. His actions supposedly prove once more that he is a monster who cannot be negotiated with, and a threat to world peace.

Denying fuel to Europe as winter approaches, in a bid to weaken the resolve of European states to support Kyiv and alienate European publics from their leaders, is Putin’s opening gambit in a plot to expand his territorial ambitions from Ukraine to the rest of Europe.

Or so runs the all-too-familiar narrative shared by western politicians and media.

Putin is using energy as a weapon by cutting supply and manipulating our energy markets.

The @EU_Commission is preparing proposals to help vulnerable households and businesses to cope with high energy prices.

It is also the reason why there has been no exit ramp – a path to negotiations – even as Russia has taken vast swaths of Ukraine’s eastern and southern flanks – territory that cannot be reclaimed without a further massive loss of life on both sides, as the limited Ukrainian assault around Kharkiv has highlighted.

The western media has to carry a major share of the blame for these serial failures of diplomacy. Journalists have amplified only too loudly and uncritically what US and European leaders want their publics to believe is going on. But maybe it is time that Europeans heard a little of how things might look to Russian eyes.

The media could start by dropping their indignation at “insolent” Moscow for refusing to supply Europe with gas. After all, Moscow has been only too clear about the reason for the shutdown of gas supplies: it is in retaliation for the West imposing economic sanctions – a form of collective punishment on the wider Russian population that risks violating the laws of war.

The West is well practised in waging economic war on weak states, usually in a futile attempt to topple leaders they don’t like or as a softening-up exercise before it sends in troops or proxies.

Iran has faced decades of sanctions that have inflicted a devastating toll on its economy and population but done nothing to bring down the government.

Meanwhile, Washington is waging what amounts to its own form of economic terrorism on the Afghan people to punish the ruling Taliban for driving out US occupation forces last year in humiliating fashion. The United Nations reported last month that sanctions had contributed to the risk of more than a million Afghan children dying from starvation.

There is nothing virtuous about the current economic sanctions on Russia either, any more than there is about the blackballing of Russian sportspeople and cultural icons. The sanctions are not intended to push Putin to the negotiating table. As US President Biden made clear in March, the West is planning for a long war and he wants to see Putin removed from power.

Rather, the goal has been to weaken his authority and – in some fantasy scenario – encourage his subordinates to turn on him. The West’s game plan – if it can be dignified with that term – is to force Putin to over-extend Russian forces in Ukraine by flooding the battlefield with armaments, and then watch his government collapse under the weight of popular discontent at home.

But in practice, the reverse has been happening, just as it did through the 1990s when the West imposed sanctions on Iraq’s Saddam Hussein. Putin’s position has been bolstered, as it will continue to be whether Russia is triumphing or losing on the battlefield.

The West’s economic sanctions against Russia have been doubly foolish. They have reinforced Putin’s message that the West seeks to destroy Russia, just as it previously did Iraq, Afghanistan, Libya, Syria and Yemen. A strongman is all that stands between an independent Russia and servitude, Putin can plausibly argue.

And at the same time, the sanctions have demonstrated to Russians how truly artful their leader is. Economic pressure from the West has largely backfired: sanctions have barely made an impression on the value of the rouble, while Europe looks to be heading into recession as Putin turns off the gas spigot.

It will doubtless not only be Russians quietly rejoicing at seeing the West get a dose of the medicine it so regularly force-feeds others.fuel

But there is a more troubling dimension to the West’s conceit. It was the same high-handed belief that the West would face no consequences for waging economic warfare on Russia, just as earlier assumed it would be pain-free for Nato to station missiles on Moscow’s doorstep. (Presumably, the effect on Ukrainians was not factored into the calculations.)

The decision to recruit ever-more east European states into the Nato fold over the past two decades not only broke promises made to Soviet and Russian leaders, but flew in the face of advice from the West’s most expert policy-makers.

Guided by the US, Nato countries closed the military noose around Russia year by year, all the while claiming that the noose was entirely defensive.

Nato flirted openly with Ukraine, suggesting that it too might be admitted to their anti-Russia alliance.

The US had a hand in the 2014 protests that overthrew Ukraine’s government, one elected to keep channels open with Moscow.

With a new government installed, the Ukrainian army incorporated ultra-nationalist, anti-Russia militias that engaged in a devastating civil war with Russian communities in the country’s east.

And all the while, Nato secretly cooperated with and trained that same Ukrainian army.

At no point in the eight long years of Ukraine’s civil war did Europe or the US care to imagine how all these events unfolding in Russia’s backyard might look to ordinary Russians. Might they not fear the West just as much as western publics have been encouraged by their media to fear Moscow? Putin did not need to invent their concern. The West achieved that all by itself.

The encirclement of Russia by Nato was not a one-off error. Western meddling in the coup and support for a nationalist Ukrainian army increasingly hostile to Russia were not one-offs either. Nato’s decision to flood Ukraine with weapons rather than concentrate on diplomacy is no aberration. Nor is the decision to impose economic sanctions on ordinary Russians.

These are all of a piece, a pattern of pathological behaviour by the West towards Russia – and any other resource-rich state that does not utterly submit to western control. If the West were an individual, the patient would be diagnosed as suffering from a severe personality disorder, one with a strong impulse for self-destruction.

Worse still, this impulse does not appear to be open to correction – not as things stand. The truth is that Nato and its US ringmaster have no interest in changing.

Their purpose is to have a credible bogeyman, one that justifies continuing the massive wealth redistribution from ordinary citizens to an elite of the already ultra-rich. A supposed threat to Europe’s safety justifies pouring money into the maw of an expanding war machine masquerading as the “defence industries” – the military, the arms manufacturers, and the ever-growing complex of the surveillance, intelligence and security industries. Both Nato and a US network of more than 800 military bases around the globe just keep growing.

A bogeyman also ensures western publics are unified in their fear and hatred of an external enemy, making them readier to defer to their leaders to protect them – and with it, the institutions of power those leaders uphold and the status quo they represent.

Anyone suggesting meaningful reform of that system can be rounded on as a threat to national security, a traitor or a fool, as Britain’s former Labour leader Jeremy Corbyn found out.

And a bogeyman distracts western publics from thinking about deeper threats, ones that our own leaders – rather than foreigners – are responsible for, such as the climate crisis they not only ignored but still fuel through the very military posturing and global confrontations they use to distract us. It is a perfect circle of self-harm.

Since the fall of the Berlin Wall, and the demise of the Soviet Union, the West has been casting around for a useful bogeyman to replace the Soviet Union, one that supposedly presents an existential threat to western civilisation.

Iraq’s weapons of mass distraction were only 45 minutes away – until we learned they did not, in fact, exist.

Afghanistan’s Taliban was harbouring al-Qaeda – until we learned that the Taliban had offered to hand Osama bin Laden over even before the 9/11 attacks.

There was the terrifying threat from the head-choppers of the Islamic State (IS) group – until we learned that they were the West’s arm’s-length allies in Syria and being supplied with weapons from Libya after it was “liberated” by the West from its dictator, Muammar Gadaffi.

And there is always Iran and its supposed nuclear weapons to worry about, even though Tehran signed an agreement in 2015 putting in place strict international oversight to prevent it from developing a bomb – until the US casually discarded the deal under pressure from Israel and chose not to replace it with anything else.

Each of these threats was so grave it required an enormous expenditure of energy and treasure, until it had served its purpose of terrifying western publics into acquiescence. Invariably, the West’s meddling spawned a backlash that created another temporary enemy.

Now, like a predictable Hollywood sequel, the Cold War is back with a vengeance. Russia’s President Putin has a starring role. And the military-industrial complex is licking its lips with delight.

Ordinary people and small businesses are being told by European leaders to brace for a recession as energy companies once again clock up “eye-watering” profits.

Just as with the financial crash nearly 15 years ago, when the public was required to tighten its belt through austerity policies, a crisis is providing ideal conditions for wealth to be redistributed upwards.

Like other officials, Nato’s Secretary-General Jens Stoltenberg has sounded the alarm about “civil unrest” this winter as prices across Europe soar, even while demanding public money be used to send yet more weapons to Ukraine.

The question is whether western publics will keep buying the narrative of an existential threat that can only be dealt with if they, rather than their leaders, dig deep into their pockets.